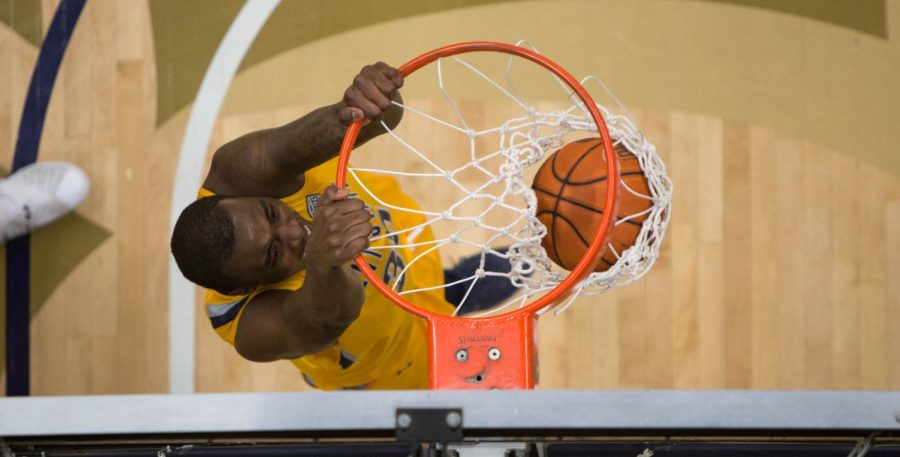 Redshirt junior forward Jimmy Hall dunks during the first half against Akron at James A. Rhodes Arena on Friday, March 4, 2016. The Flashes lost 60-74.

The Kent State University men’s basketball regular season came to an end as the Flashes (19-12.10-8 Mid-American Conference) dropped their final road game 74-60 to the University of Akron (24-7, 13-5 MAC) Friday night.

“We just didn’t play quite good enough,” coach Rob Senderoff said. “Too many turnovers—some of them they forged, but some of them we gave to them. We missed too many shots around the rim and when you do that, it’s tough to win.”

The Flashes trailed the Zips 33-30 heading into the second half with eight turnovers compared to Akron’s three. Kent State added seven more turnovers in the second half, finishing with 15 and allowing Akron to score 12 points off of those turnovers.

Although the Flashes out rebounded the Zips 45-41, Kent State gave up 21 second chance points to the Zips in Friday night’s loss.

“We’re supposed to dominate the glass,” Senderoff said. “That didn’t happen tonight and that was the difference in the game.”

Redshirt junior Jimmy Hall was all over the score sheet Friday, recording his seventh double-double this season with 20 points and 17 rebounds. Hall was also called for a technical foul at 8:59 in the second half.

“I just tried to play as hard as I can,” Hall said. “Sometimes I lose my head and get frustrated. Everyone tells me to keep playing and I just got to grow up and take ownership of it. I just go out there and play with as much passion as I can and it’s hard to go out there and hold it all in when you don’t get the calls you want—that’s basketball.”

“They’re a good team and they are explosive offensively,” Senderoff said. “We didn’t do quite good enough of a job defensively. We defended the three pretty well—not perfect, but pretty well. They were able to overcome it because of offensive rebounds and because we had 15 turnovers to their seven.”

With this loss, Kent State finishes 10-8 in the Mid-American Conference. The M.A.C. Tournament is set to start Monday.