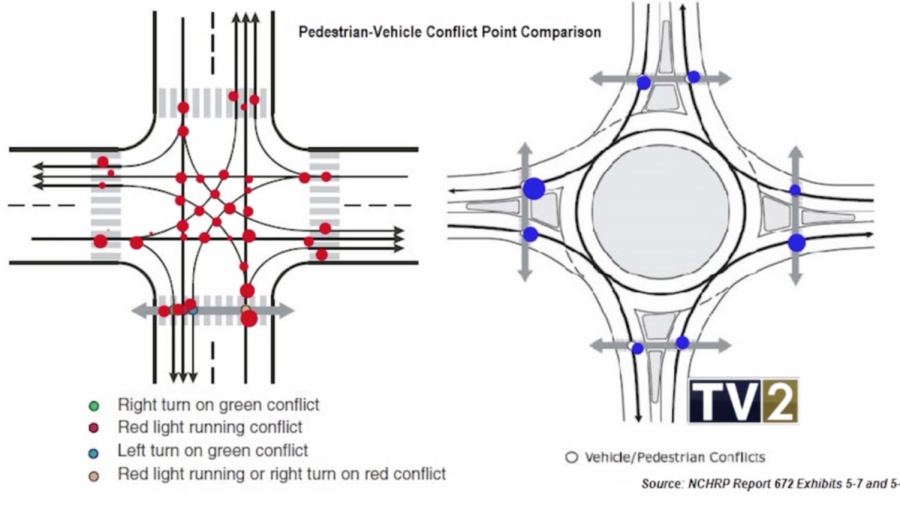 Last year the number of pedestrians killed by motor vehicles in the first half of the year went up 124 percent.

Nationwide, it was 6 six percent, but Ohio had the largest increase.

Summit Street is no different, being the most congested road in Portage County and one of the most dangerous roads for pedestrians.

The City of Kent is adding roundabouts to Summit Street to help ease traffic.

Adding Roundabouts to the street will not only make driving easier, but it will make the roads safer for pedestrians as well.

“Roundabouts are being used instead of signalized intersections because they have been studied to be safer and move more traffic,” Kent City engineer Jim Bolling said.

Traditional intersections have 32 conflict points where it is likely for accidents to occur, while roundabouts only have 8.

Since traffic moves in a single counterclockwise direction, accidents are likely to be between cars moving the same direction, which typically results in less injuries.

For pedestrians, cars must slow down and even sometimes stop before being able to drive into the roundabout, which will make it safer and easier for pedestrians to cross.

Roundabouts are specifically designed to be safer for drivers, cyclists, and pedestrians.