Women’s basketball travels to Ypsilanti for first round of tournament 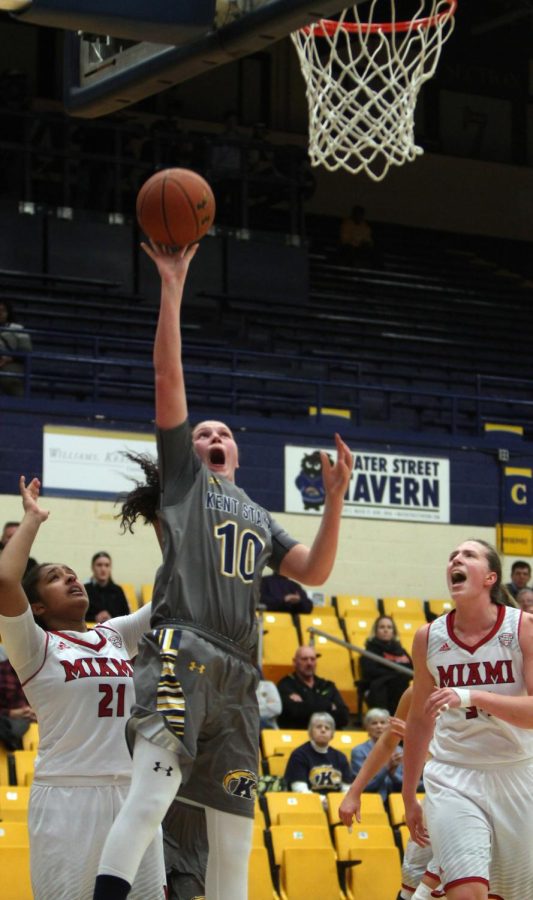 Redshirt sophomore forward McKenna Stephens reaches to make a basket in a basketball game against the Miami University Redhawks in the M.A.C. Center on Wednesday, March 2, 2016. The Flashes beat the Redhawks 59-53 in the last home game of the season.

The 11th-seeded Flashes will be traveling up to Eastern Michigan University to take on the sixth-seeded Eagles. Kent State will be looking for its first tournament win since 2010, when they beat Central Michigan University. The Flashes are 6-22 on the year, and all of their wins have come from home.

These two teams played each other last year, as identical seeds. Eastern Michigan won that matchup 70-52 and then went on to beat the seventh-seeded Toledo Rockets.The team then upset both number three University of Akron and number two Ball State University. The Eagles would eventually lose to the top seed Ohio University Bobcats in the MAC Tournament Finals.

Earlier in the year, the Flashes battled the Eagles. The game was close until the fourth quarter, when the Eagles outscored the Flashes 23-6, going on to win 72-51. Sophomore Jordan Korinek was the high scorer for the Flashes, posting 16 points and nine rebounds.

The Eagles are led by junior guard Cha Sweeney, who’s averaging almost 18 points a game. She has scored 20 plus points in 12 games this season and scored a season best 31 against Harvard back in December.

Eric Pitcher is a sports reporter for The Kent Stater. Contact him at [email protected]