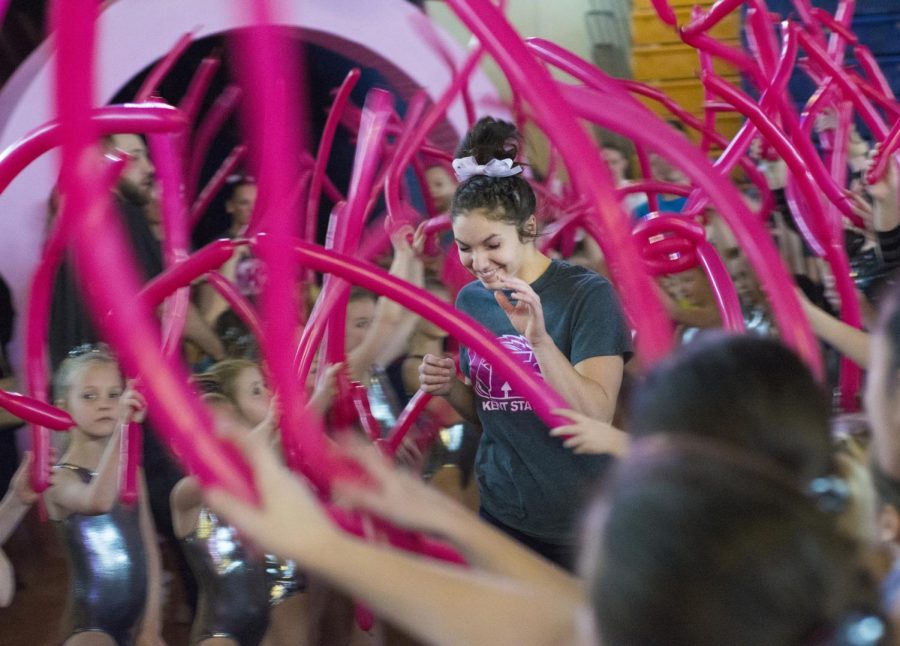 Kent State University freshman Michaela Romito runs through a tunnel of pink balloons held by young gymnastic teams from around Portage county during the Flip for the Cure gymnastics meet in the M.A.C. Center on Sunday, Mar. 1, 2015. The Flip for the Cure event included a Pinkest fan competition, breast cancer survivor recognition, and various other promotions and activities all to raise money for the COSA Comprehensive Breast Center - COSA CARES program.

Breast cancer has affected a number of the Kent State University gymnasts, making Friday’s Flip for the Cure meet even more meaningful.

Senior Rebecca Osmer’s mother, Michelle Osmer, fought breast cancer 15 years ago when Rebecca was a little girl. Rebecca said she is glad to be able to support the people in her life who have been affected by the disease.

“(Flip for the Cure) brings good awareness,” Osmer said. “One of my very good friends had her last chemotherapy session (Tuesday), so I’m excited to show her the support that we have for her that we might not necessarily get to show in other ways.

“I know (the team’s support) means a lot to my mom and to my friend. They’re both really excited about us bringing awareness to something bad and hard that they went through.”

Junior Skyelee Lamano’s grandmother, aunt and step-aunt have all been diagnosed with breast cancer. Lamano said her grandmother attended Flip for the Cure last year and loved seeing everyone’s support.

Jordan’s father, Leonard Hardison, went to the doctor for a checkup in December of 2014. The doctor found a lump and diagnosed Leonard with breast cancer. Leonard had surgery four months later to remove the mass and, as of last Christmas, he is healthy and cancer-free.

“I think a lot of people overlook (male breast cancer),” Hardison said, “because it’s only like a 1 percent chance. But (Leonard’s) mother actually had breast cancer, too.

“Flip for the Cure just brings really good awareness that men can get (breast cancer), too, and everyone should be checking. We’re really thankful that (Leonard) was aware of himself. It got figured out before (the breast cancer) became a big problem.”

Assistant coach Sharon Sabin and assistant athletic director for student-athlete academic services Angie Hull started Flip for the Cure about eight years ago with inspiration from similar events at other universities. The Kent State gymnastics team has been raising money to support individuals affected by breast cancer ever since.

Sabin said Flip for the Cure started small, but it has grown as the team and community have become more attached to the cause.

“The first year, I was a little nervous,” Sabin said. “But (Flip for the Cure) seemed to catch on, so we just kept thinking of ideas and coming up with stuff. We started just selling t-shirts to raise money for (breast cancer), and it has grown and grown every year.”

The Kent State gymnastics team donated the proceeds from Flip for the Cure to a number of charities before finding one with a personal connection. Dr. Kristine Slam, former Kent State gymnast and current board certified surgeon with the metropolitan surgery division of Central Ohio Surgical Associates (COSA), specializes in surgical oncology. Slam started a grant called COSACARES (Cancer Assistance, Resources and Education) to help women pay for breast cancer treatment and recovery.

The Flashes raised approximately $8,000 for COSACARES last year, and they hope to raise even more money Friday. This year’s donation will be given in honor of former Kent State gymnast Tammy Mahoney, who died of breast cancer in October 2015 at the age of 44.

Mahoney’s friends and family, who have donated to COSACARES in the past, will attend Friday’s meet.

Sabin said one of the things she likes most about Flip for the Cure is seeing the gymnastics team become more passionate about breast cancer awareness.

“Every year, we have seniors going out, and freshmen coming in,” Sabin said. “I like to see the (gymnasts) really get attached to (Flip for the Cure) and see who takes on that role of motivating the team to help with the event and showing how important it is.”

Timko and Fabry have dedicated every Friday since December to planning, asking for donations, making decorations and raising awareness for breast cancer and Flip for the Cure.

Fabry said she has always worked with charities.

“I’m really big into helping others and raising money, stuff like that,” Fabry said. “I’ve done service work all my life, so being able to take a bigger role in (Flip for the Cure) and leading people in service work is a good opportunity.”

The Kent State gymnasts walk into the M.A.C. Center with breast cancer survivors at every Flip for the Cure meet. Timko said seeing the looks on the survivors’ faces will make all of the time she spent planning the event worthwhile.

“It’s heartwarming and nice to (walk out with the survivors) because these people went through such a big fight,” Timko said. “They just think it’s the greatest thing ever. We’re just walking out to another meet, but (the survivors) think it’s so exciting. Last year, (survivors) cried because they were just so happy about it.”

The Flashes are excited for the energy from the largest crowd of the season to carry into their competition with Eastern Michigan University. The winner of Friday’s meet will take the Mid-American Conference regular season title, and Fabry said that will motivate the gymnasts even more.

“If we beat (Eastern Michigan), we’ll get our championship rings,” Fabry said. “I think that’s in the back of everyone’s minds, pushing us to do really well. There’s so much energy at (Flip for the Cure) that it’s kind of hard not to feed off of it and do really well.”

Doors to the M.A.C. Center will open at 5 p.m. Friday for Flip for the Cure, and the Flashes will compete against Eastern Michigan at 7 p.m. Before the meet begins, visitors can enter basket raffles and play games to raise money for COSACARES.

Elise Kogelnik is a sports reporter for The Kent Stater. Contact her at [email protected]