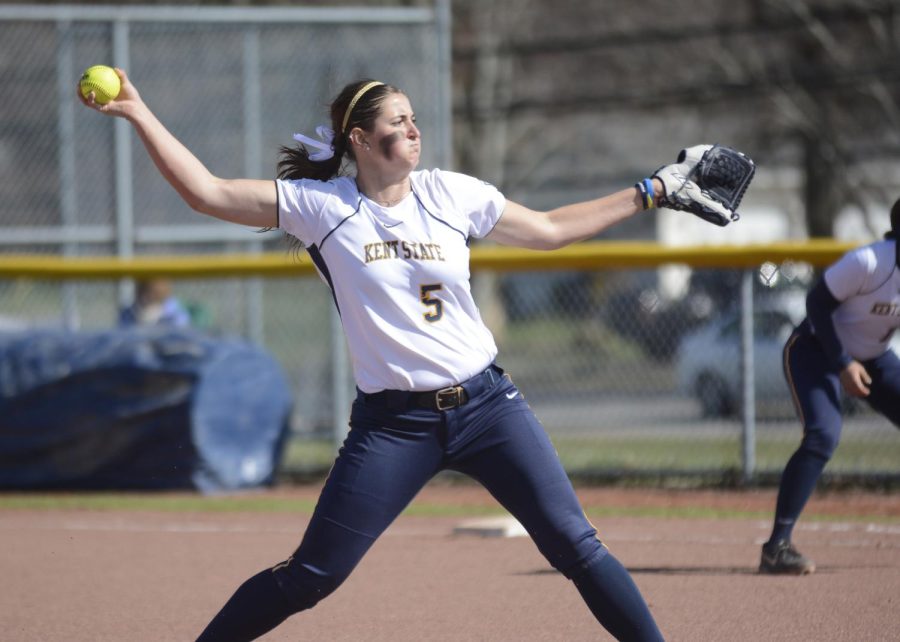 Kent State sophomore pitcher Ronnie Ladines pitched all five innings of Kent States 12-2 win over the University of Akron at the Diamond at Dix on Friday, April 10, 2015, allowing just 4 hits and 2 runs.

The Kent State softball team was supposed to play five games last weekend in the University of Washington’s Husky Classic. But Mother Nature had other plans.

Friday evening, the Flashes’ (13-4) game against Bradley University was called because of inclement weather and, two days later, Kent State and Bradley were unable to play the scheduled rematch because of the persistent rainstorms.

However, despite the weather, Kent State was able to play two of its tournament games, a 2-0 victory over the University of Montana and an 11-0 loss against the host Huskies.

Against Montana, Kent State scored both its runs in the bottom of the third inning after senior Michele Duffy double-scored freshman Hunter Brancifort. Three batters later, junior Maddy Grimm was inserted into the lineup to pinch hit for freshman Jen Cader and an error by Washington right fielder Dani Braun enabled Duffy to score.

And a two-run insurance was all sophomore pitcher Janel Hayes needed. Hayes threw 5.2 scoreless innings for the Flashes, surrendering five hits and one walk, while junior Ronnie Ladines came in for relief, striking out two of the four batters she faced.

However, Kent State didn’t fare as well in the second game of the doubleheader.

Against Washington, the No.7/No. 8 team in the country, the Flashes struggled offensively and were only able to collect four hits against starting pitcher Madi Schreyer.

Washington jumped out to an early three run lead, courtesy of junior Ali Aguilar’s two-run homer, and never looked back, scoring eight more runs over the next three innings, en route to an 11-0 win. The game was then called after the top of the fifth due to the NCAAs’ mercy rule.

On the mound, Ladines gave up nine earned runs on seven hits and six walks, while notching three strikeouts.

On Sunday, the Flashes were ahead, 9-4 in the fifth, against Bradley when the rain hit. But since a full five innings weren’t complete, the game, as well as all individual stats, aren’t recorded.