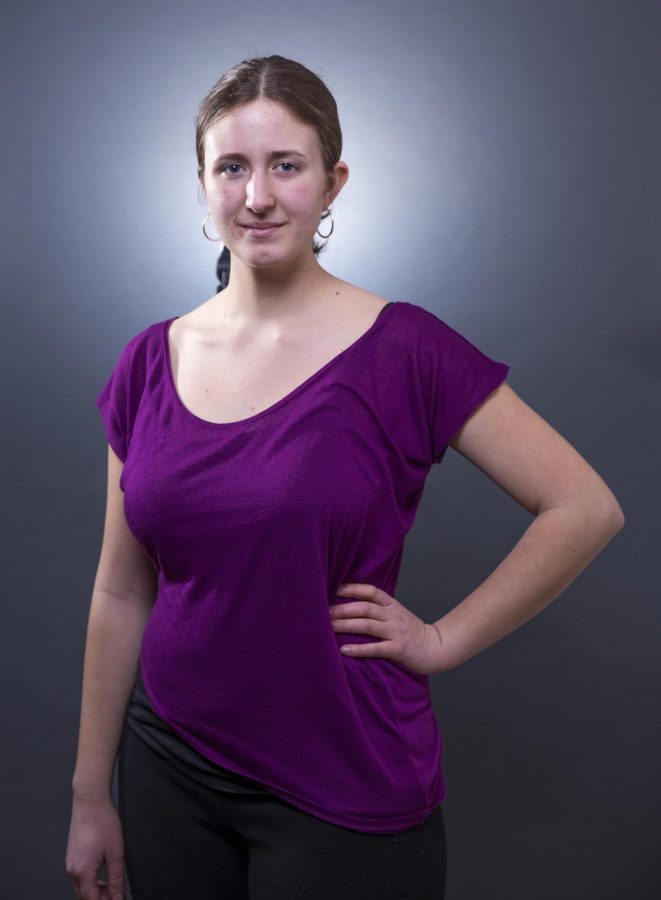 Liz Schmidt’s curiosity and interest was the spark that drove her essay to take home top honors at the YES! Magazine essay contest.

Showing interest in social injustices was nothing new for Schmidt. So, when she wrote her essay, she had all the inspiration and motivation she needed.

“I’m just generally interested in social justice issues and so my friends usually get a mouth full of it all the time,” Schmidt said, laughing.

Schmidt’s essay discussed social injustices on a large national scale and the injustice that many people deal with on a daily basis, but also how acknowledging others and making a connection can connect society instead of tearing it apart.

“If we come out of autopilot for just a moment to be a little more alive, we can’t help but connect to others,” Schmidt wrote in her winning essay. “When we feel connected to the rest of the world, we take responsibility for it.”

As a sophomore majoring in conflict management, Schmidt discussed conflicts frequently in her coursework. Her essay was originally an assignment from associate professor, Karen Cunningham, in the Center of Applied Conflict Management.

“I’ve actually used this a couple of times. One of the things we talk about, in terms of trying to prevent conflict, is we talk about the importance of awareness,” Cunningham said.

Each student in the class had to respond to a prompt provided by YES! Magazine. Each quarter, the magazine provides a different prompt for the students to write about. After the students have written the essay the professor submitted three of the top essays to the contest.

“It was just so insightful, so thoughtful and she just has such a connection with people and the kind of suffering that they go through,” Cunningham said.

Schmidt mentioned that her inspiration for the essay was her reaction to the shootings that occurred in October 2015, at Umpqua Community College in Oregon.

“Right around the time that I started actually putting words down on paper was when the shooting in Oregon happened,” Schmidt said. “That was just really jarring for me in terms of the event itself.”

The shooter killed ten students and an assistant professor and injured seven other students before killing himself. This event devastated Schmidt and sparked her inspiration.

“She talked about all the ways, as (an) individual, (that) she could make a difference in the world,” Cunningham said. “It was just really well written, very thoughtful and provocative so I was really excited when she was selected as the university winner.”

Schmidt references some of the current social justice issues involving killings of African-Americans and the accessibility to guns and various firearms in her essay. She advocates using anger to speak out against injustices.

“If we are going to treat each other justly, we must regain the depth in our feelings,” Schmidt said. “That means embracing loss and using our anger to speak out against injustice.”

After high school, Schmidt lived abroad in Senegal, West Africa, where she learned about the culture, the people and herself. Her kindness and sense of responsibility pours from her essay.

“Her compassionate nature manifested itself in eighth grade,” she said. “Sadly, many youth lose their capacity for compassion as they mature, but Liz allowed hers to grow.”

“I hope people take away some sense of inherent beauty in the world,” Schmidt said. “The idea of the power we have in being aware of what’s happening around us and what’s important to us and being able to influence those things.”

Recognizing and valuing an individual’s impact on the world is how Schmidt believes we can help lessen the frequency of social injustices within society.

“When I read (Schmidt’s essay) I thought this is very uplifting, very empowering. So you read it and think, ‘I can do things that actually make a difference’,” Cunningham said. “It’s nice to see people who think like that.”

Jailyn Menefee is the social sciences reporter for The Kent Stater, contact her at [email protected]