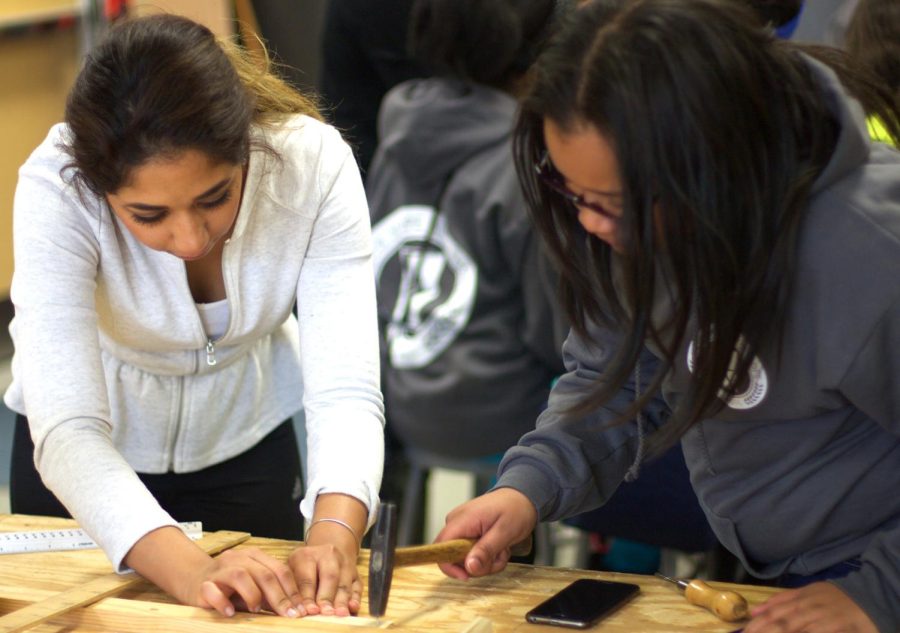 Boys Hope Girls Hope is an organization that provides assistance and resources to urban area students in need, ranging from sixth grade to the college-level.

The branch of the organization that visited Kent State is called the Hope Prep Program, which serves middle school students in the Northeastern Ohio community who attend under-resourced schools.

“These schools don’t necessarily have access (to) all the materials to help their students be on track of being completely ready for high school as well as college,” said Tina Ohmart, manager of the Hope Prep Middle School Academy. “We do academic enrichment and support with our students and teach them career skills like technology. We also want to expose students to different careers they wouldn’t necessarily have thought about before, like construction management.”

Ohmart said that each month, the organization has a career learning day where the group takes its students to different colleges to learn about fields they might be interested in.

“The goal is to help them see how many careers are out there because they see what’s around them, they see their teachers, police officers, their parents and other adult figures in their community, but because they’re in areas with few resources, they haven’t seen very much.” Ohmart said. “Just letting them see the options that are out there and giving them the skills they need to understand what careers would be right for them, or ones that they would enjoy, and the academic support to get there is my goal for the middle school program.”

During the program, Kent State’s construction management faculty and students assisted sixth and eighth grade students in two different learning activities. One group first focused on learning about reading layout designs on computers, while the other group worked using blueprints and layouts to build real physical model cottages out of wood.

Tom Kalo, a faculty member in the Applied Science and Technology department who helped direct the program, said that after the activity, the groups would be able to switch places so they have a chance to look at both sides of the field.

“We all learn differently; you have your hands-on learners and your book learners, and when the groups switch, it’ll kind of tie everything together for each group,” Kalo said.

The Kent State students who assisted the young students in learning about the design software, as well as building the model cottages, were a part of Kalo’s Saturday morning class. Kalo said the students, who are majoring in either construction management or interior design, were very avid about wanting to help out and volunteer with the day’s program.

“They were all excited to come in for today, which I thought was really nice because there’s not many young people willing to get up this early on the weekend.” Kalo said. “I also asked them what they thought of doing a little presentation and they were just all (about) doing it and working with the kids today. It was really nice to get that kind of response.”

Many of the middle school students who participated in the program said they enjoyed learning about construction management and were now interested in the career.

“Building the house was difficult because the nails don’t want to go in, and you have to keep re-doing it,” said Naomi, a sixth grader from the Akron area. “I think I would do this as a job, though, since my dad does it too.”

Sixth grader Valentina from Akron said that even though she wants to be a brain surgeon when she grows up, she thinks construction management would definitely be her second choice.

“I think it’s cool because you could build things and be able to walk by it after and say you built it,” Valentina said.

Joe Karpinski, the program coordinator for construction management, said the goal is to give the visiting middle schoolers awareness.

“This is their first time seeing a little bit of construction. They’ve never been to Kent State, so they get to see that there are colleges other than ones around Cleveland. And we’re here to show them a career they might consider down the road,” Karpinski said.

Kalo agreed and said that it’s all about exposing the kids to a career they might not have known about without this program.

“These young people are our future. That’s what this is all about, bringing them in and getting them interested,” Kalo said. “Even if it doesn’t grow the program here at Kent State, it still creates an awareness and that’s a wonderful thing.”

Jenna Kuczkowski is the College of Applied Engineering reporter for The Kent Stater. Contact her at [email protected]