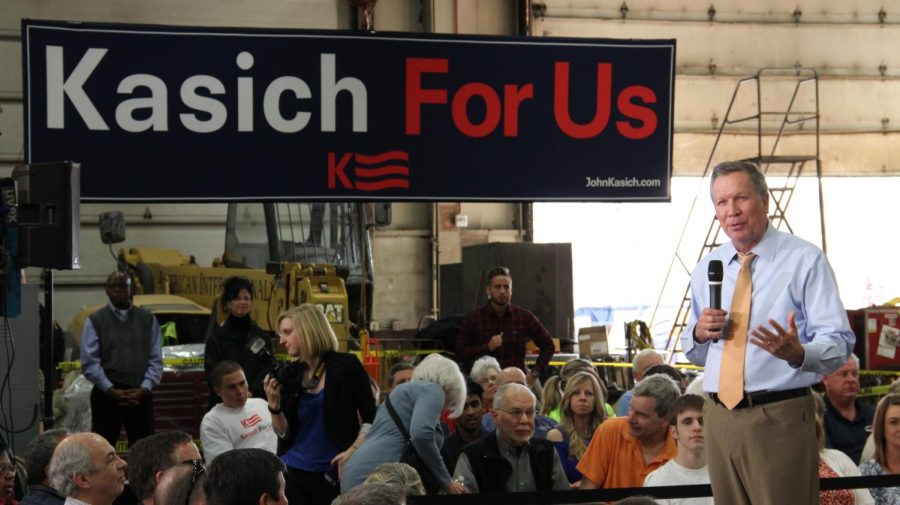 Governor and presidential hopeful John Kasich addressed a large crowd Tuesday night at the Ohio CAT center in Broadview Heights as part of his “Battleground Ohio” campaign tour. He focused on aiding small businesses and scaling back big government, sentiments echoed by his supporters in attendance.

“I get it, we have to fix all this in the country like we fixed it in the state,” Kasich said in his opening thoughts, highlighting his unique situation.

With a week left before Ohio voters take to the polls March 15, the state’s governor is making his last stand before the Ohio primary, building his campaign on his moderate conservatism and record as governor.

Kasich’s unique position as the state’s governor came up many times throughout the conversation, even to the point where the town hall started with an “O-H-I-O” chant.

The choice of placing the town hall in the CAT building also provided a unique opportunity, as the company’s marketing director opened for Kasich, lauding him as a pro-business candidate.

He said he hopes to win both his home state and Michigan.

“I don’t want to hear anything negative about Michigan tonight,” Kasich said. “We’re going to need them.”

Donald Trump’s name came up in the rally, when an unidentified voter to shouted to Kasich, asking him how he is going “trump Trump.”

Kasich responded with a smile, saying the upcoming Ohio primary will be an integral part in him overcoming Trump in the race.

Kasich mentioned a recent interview Trump conducted with Cleveland’s WKYC news, where the candidate said he would “certainly” consider Kasich as his running mate if he won the Republican nomination.

Kasich declined Trump’s offer on the O’Reilly Factor earlier this week, saying being governor of Ohio is the “second-best” job in country.

During his speech, which began at 5 p.m., Kasich addressed his successes as governor, including the budget he balanced during his tenure.

“When I came in, they were planning on lowering Ohio’s credit, and I said, ‘Take a chance on me,’” Kasich said. “And now we’re up over 420,000 private sector jobs, and that’s just incredible.”

Kasich also devoted much of his speech to a touchy topic for the Republican nominees, healthcare.

“We don’t want anybody to just all of a sudden not have health insurance,” Kasich said in response to ending Obamacare.

Kasich is known in the GOP for his stance on Obamacare supporting certain measures of the law, including pre-existing conditions and widespread health coverage.

mpletely side with the president on his controversial healthcare reform, specifically citing the bureaucracy and complexity of hospitals as a result of the law.

He even joked he would have to give his hospital bills to his wife, because “I can’t figure them out, and I’m running for president.”

Kasich finished his discussion on healthcare by claiming healthcare costs would be driven down by offering incentives to doctors doing “a good job.”

However, the discussion did not completely favor Kasich, with some voters expressing their uncertainty.

But most Ohioans at the rally said they agreed with Kasich’s views.

“He has the experience,” 54-year-old voter Maryanne Berelli said of Kasich. “He understands how everything works, and he cares about the real issues.”

Cleveland native Laura Higelman was also in attendance to support the governor.

“He isn’t a businessman,” Higelman said. “I’m here because we need a real politician, not a celebrity.”

Kasich is running against Trump and Senators Marco Rubio and Ted Cruz in Ohio’s primary election.

“John just has a better mental state than some of the other candidates out there,” Berelli said. “Some of these other guys running are just crazy…I’m voting because I’m looking for smaller government. I want more power to the states.”

Currently, Kasich is in fourth place in the primary election with 37 delegates. Trump is in the lead with 384.

“There’s absolutely no reason to lose hope,” Kasich said. “We’re going to win Ohio, Michigan and then the entire thing.”

Kasich is continuing his path through Ohio for the rest of this week and visiting Westerville, North Canton and Mansfield.