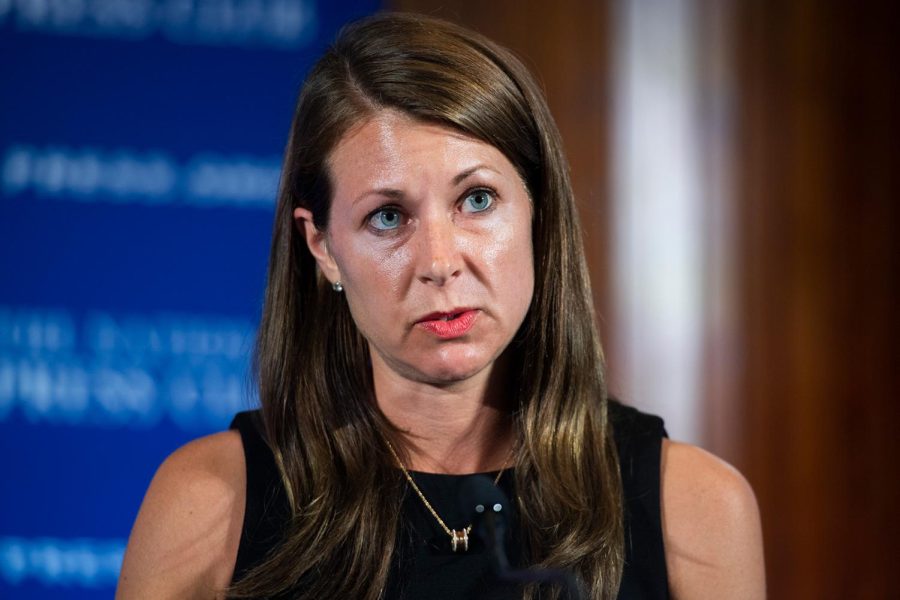 Melissa DeRosa, secretary to New York Gov. Andrew Cuomo, conducts a news conference with Cuomo on the COVID-19 pandemic at the National Press Club in Washington D.C., after a meeting with President Trump at the White House on Wednesday, May 27, 2020.

Secretary to Gov. Cuomo Melissa DeRosa told the lawmakers in a private virtual meeting that the state had been concerned about a Department of Justice preliminary inquiry into Covid-19 deaths in New York nursing homes, as well as attention from former President Donald Trump, who was tweeting about Cuomo and other Democratic governors’ handling of the nursing homes, the transcript, released Friday by the governor’s office, shows.

Outstanding inquiries from state lawmakers were also addressed on the call, according to a source who participated in the call, after an August 3 joint committee hearing on Covid-19 residential health care facilities. Lawmakers had demanded full transparency on the Covid-19 death toll in nursing homes.

The governor’s office released an excerpt of the call transcript in response to reporting of DeRosa’s comments.

“I was explaining that when we received the DOJ inquiry, we needed to temporarily set aside the Legislature’s request to deal with the federal request first. We informed the houses of this at the time. We were comprehensive and transparent in our responses to the DOJ, and then had to immediately focus our resources on the second wave and vaccine rollout. As I said on a call with legislators, we could not fulfill their request as quickly as anyone would have liked. But we are committed to being better partners going forward as we share the same goal of keeping New Yorkers as healthy as possible during the pandemic” DeRosa said in a statement Friday.

But on the private call DeRosa said the administration essentially “froze” because it wasn’t sure what information it was going to turn over to the DOJ, and didn’t want whatever was told the lawmakers in response to the state joint committee hearing inquiries to be used against it in any way.

“The letter comes in at the end of August and right around the same time, President Trump turns this into a giant political football. He starts tweeting that we killed everyone in nursing homes, he starts going after (New Jersey Gov. Phil) Murphy, starts going after (California Gov. Gavin) Newsom, starts going after (Michigan Gov.) Gretchen Whitmer,” she said according to the transcript.

“He directs the Department of Justice to do an investigation into us. He finds one person at DOJ, who since has been fired because this person is now known to be a political hack, who sends letters out to all of these different governors. And basically, we froze, because then we were in a position where we weren’t sure if what we were going to give to the Department of Justice or what we give to you guys, what we start saying was going to be used against us while we weren’t sure if there was going to be an investigation.”

DeRosa also said the administration apologized for the position the Democratic lawmakers were put in over the Covid-19 fatality toll, especially for the political position they faced with Republican legislators.

“So, we do apologize. I do understand the position that you were put in. I know that it is not fair. It was not our intent to put you in that political position with the Republicans,” she said.

The New York Post first reported the story, citing an exclusively obtained recording of the meeting.

Disputes over the data

For nearly half a year, legislators have pushed the Department of Health to publicly release the complete data representing the Covid-19 death toll of long-term care residents.

In late August, a few weeks after the state legislative hearing, the DOJ announced a preliminary inquiry into New York and three other Democrat-led states for their handling of the virus in nursing homes. The DOJ announcement noted in the release that the four states — New York, New Jersey, Pennsylvania, and Michigan — all “required nursing homes to admit COVID-19 patients to their vulnerable populations, often without adequate testing.”

The governor has faced questions on Covid-19 deaths of New York’s nursing home residents, maintaining for months that the data inquiries originated as a “political attack.”

“What I would say is everyone did the best they could. When I say the State Department of Health — as the report said — the State Department of Health followed federal guidance. So, if you think there was a mistake, then go talk to the federal government. It’s not about pointing fingers or blame. It’s that this became a political football right. Look, whether a person died in a hospital or died in a nursing home. It’s – People died. People died,” Governor Cuomo said during a press conference on January 29.

Since then, health officials have released data that shows more than 15,000 confirmed and presumed Covid-19 deaths among New Yorkers who lived in nursing homes and other adult care facilities such as assisted living residences.

The publicly available death toll was roughly more than 8,700 before the state publicly released data on deaths of residents who died after being transported out of a facility.

The department has maintained that it previously only reported deaths of those who died inside a facility.

“The word ‘undercount’ implies there are more total fatalities than have been reported; this is factually wrong,” Zucker said.

Following the report of DeRosa’s apology, state legislators from both parties were sharply critical of the administration.

A group of Democratic lawmakers called for the repeal of Cuomo’s expanded executive powers Friday, among them state Sens. James Skoufis and Gustavo Rivera, who were on the call Wednesday.

“Without exception, the New York State Constitution calls for the Legislature to govern as a co-equal branch of government. While COVID-19 has tested the limits of our people and state —- and, early during the pandemic, required the government to restructure decision making to render rapid, necessary public health judgments —- it is clear that the expanded emergency powers granted to the Governor are no longer appropriate.”

“While the executive’s authority to issue directives is due to expire on April 30, we urge the Senate to advance and adopt a repeal as expeditiously as possible.”

Alessandra Biaggi, a Democratic state senator, posted on Twitter, “You’re only sorry that you all got caught. Because of your decisions, thousands of people died who did not have to die. We’re not ‘offended’, Melissa, we’re furious – with extremely good reason.”

State Senate Republican leader Rob Ortt said, “Governor Cuomo and his administration must be investigated from top to bottom and he must be stripped of his emergency powers.”

Republican state Sen. Tom O’Mara said, “Top legislative Democrats going behind closed doors with the Cuomo administration to discuss the nursing homes scandal is another stonewalling session that has nothing to do with revealing the truth, only with continuing to hide it. What legislative Democrats need to do is to call for testimony and full records from Governor Cuomo and his inner circle, under subpoena, in public.”

Gov. Cuomo’s senior adviser Rich Azzopardi said in a statement responding to the New York Post story that producing documents for the federal government was a priority.

“We explained that the Trump administration was in the midst of a politically motivated effort” to blame Democratic-led states for Covid-19 deaths, Azzopardi said, and “that we were cooperating with Federal document productions and that was the priority and now that it is over we can address the state legislature. That said, we were working simultaneously to complete the audit of information they were asking for.”

Azzopardi did not directly respond to CNN’s request for comment Thursday.