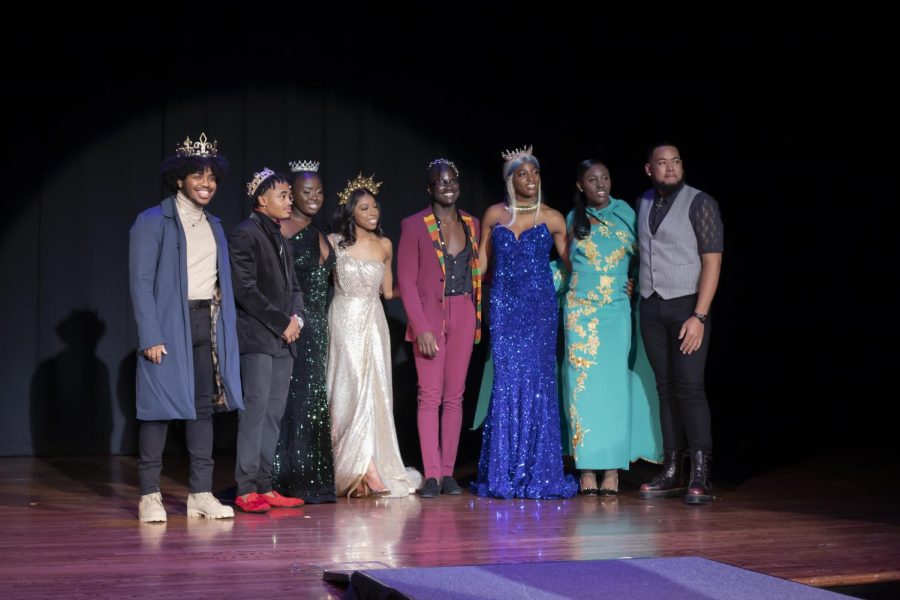 Lights begin to dim over a ballroom—white tablecloths adorned with lavender and champagne-colored bouquets, candlelight illuminating the faces of finely dressed guests and soft orchestral music filling the air.

At the front of the room a curtain opens on 10 Black royals posed as statues. Unmoving as a guard, flashlight beaming across the stage, inspects the exhibit. It’s “A Night in the Royal Museum.”

The 51st Annual Renaissance Ball hosted by Black United Students (BUS) was a sight to see. On the agenda for the evening: a pageant meets Black homecoming, where 10 Black students compete for the chance to be crowned.

To open the evening, the monarchs performed five choreographed dances, each a representation of an exhibit in the royal museum.

This year’s queen, sophomore fashion design major Kiara Moore, said she was glad to have finally made it to the ball. After weeks of participating in seven-hour practices, learning the dance routines and coordinating with the models for her talent portion (a fashion show), Moore took a sigh of relief.

“It came together so amazingly,” Moore said.  “I’m so emotional right now. I’m trying not to cry. I’m just overfilled with joy.”

The royalty was nothing short of talented. The talent portion was comprised of rapping, singing, poetry and, the surprise of the night, acting.

Freshman theatre studies major Julian Grimes, this year’s king, wrote, directed and acted in “Cycle,” a play that showed the cycle of life of a Black man. The play focused on the way police brutality against Black men continues in an endless loop. Grimes said being a part of BUS, and being surrounded by people that look like him, is a much-needed culture shock.

“It’s like being in your own HBCU (Historically Black College and University) in a PWI,” Grimes said. “It’s just humbling to be a part of something this big. Something that’s bigger than myself.”

The final category the royalty competed in was formal wear, accompanied by questions from the judge’s panel. The judges asked them about activism, inspiration and being a Black person in America. Senior economics major William Joiner, who was crowned prince, said his friend and mentor, Carl Owensby, helped him come out of his shell and find his true self.

“I just came to this show to do what I always do, and just be me,” Joiner said.

The Renaissance Ball is an opportunity to learn more about yourself, said the ball’s princess, sophomore fashion merchandising major Atira Wong.

“It felt great being a part of something that is very historical and is very important to the Black community of Kent,” Wong said. “We go to a PWI, which if you don’t know, is a term for a predominately white institution. And so, it is hard to find Black spaces, and this one has been around for over 50 years. So being a part of it is a big deal, and being crowned means you’ve done that much more.”

Reegan Saunders is a reporter. Contact them at [email protected]