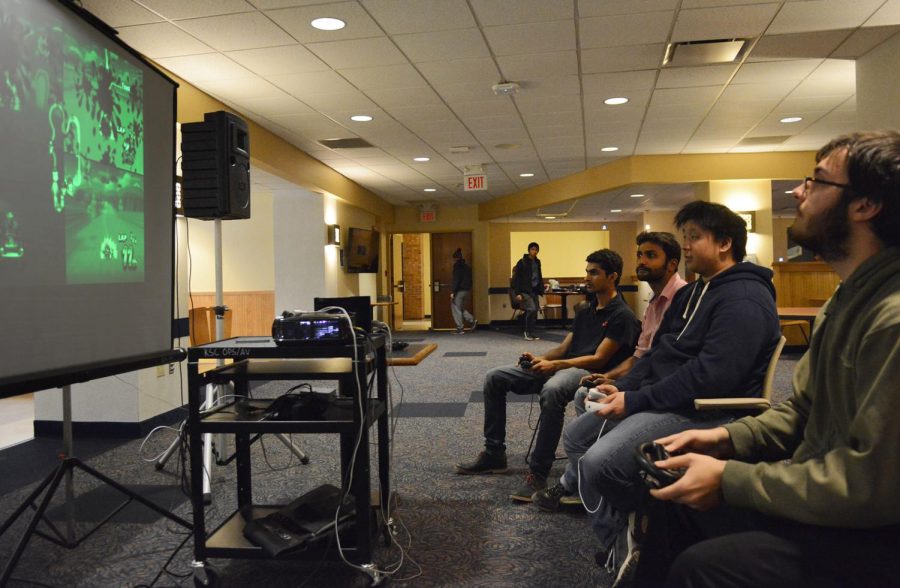 For one night a week, the Cyber Café in the lower level of the Student Center sheds its low-key lounge vibe and becomes a high-energy makeshift arcade. Tables topped with nearly every board game imaginable, and screens standing around the room with video games projected onto them, students get to show their competitive sides while temporarily forgetting about any upcoming exams.

The Center for Student Involvement kicked off its weekly Game Night series on Feb. 1. from 7 to 9 p.m. The Game Nights will be held on Mondays in February and Thursdays in March. The games that are available to students are a variety of no-batteries-necessary classics, as well as a few high-tech modern crowd-pleasers.

Junior finance major Ferenc Jasper and freshman zoology major Thomas Fisher, are event staff for Student Center Programming. They both agreed that video games are the most popular among students attending, but that there is still some interest in board games.

“Game Night helps students connect with each other more outside of a classroom setting,” Jasper said.

While bonding with peers over a close game of chess or a neck-and-neck race in “Mario Kart” is one potential benefit, some students show up for Game Night simply to unwind from academics.

“(Game Night) lets me have fun because it makes me not think about my stressors,” said freshman exploratory major Kirby Schmieding.

Stress relief is often the primary goal in CSI-sanctioned events on campus, but Game Night may have a few hidden bonuses.

Board games are often cited for helping players develop valuable skills. This doesn’t, however, mean a few rounds of “Monopoly” will replace your microeconomics class, or that “Jenga” will teach you how to design a skyscraper. Instead, players can enhance problem-solving, spelling, mathematics and other skills through certain games.

Don’t completely discount video games, either. Despite the stigma around the popular industry, a recent study from the University of California, Irvine shows a link between playing 3-D video games and an improved memory.

Before students go trading in their textbooks for expensive new gaming consoles, Kent State psychology professor John Dunlosky assures that games are not a logical substitute to studying, or a lasting solution to stress.

“Do not expect (playing games) to lead to any real improvements in your academic achievements,” Dunlosky said. “If the stress is about passing an exam, one of the best ways to relieve the stress is to spend more time studying.”

“I think it’s a big stress reliever,” Fisher said. “If you’re studying a lot, you can go to Game Night for a nice brain break and then go back to your homework after.”

Benjamin VanHoose is an entertainment reporter for The Kent Stater. Contact him at [email protected]