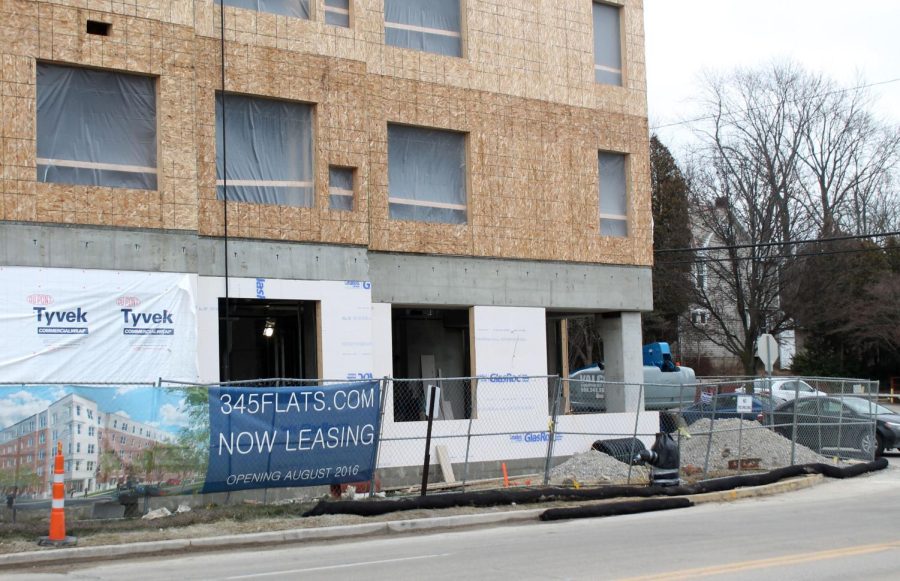 The construction for the new 345 Flats on the corner of Summit Street and Water Street on Wednesday, Jan. 27, 2016.

With two apartments already under construction just off campus, developers are proposing more units with the city of Kent: in place of the former municipal courthouse, as well as the redevelopment of an existing housing property on Summit Street.

Currently under construction and already leasing is the apartment building 345 Flats on the corner of Summit Street and S. DePeyster Street, which has 280 bed rentals. In addition to this, is Avant 220, which is located next to the Kent State University Hotel and Conference Center, has 52 beds. Both are expected to open this August.

Bridget Susel, Kent community development director, said these apartments are rent-per-bed models which would be more geared toward students.

Although, claims have been made that Kent won’t have enough space for potential tenants.

“We’ve had many developers coming to tell us that we need more housing for students, that the population is growing exponentially and that we’re not going to have enough housing,” Susel said.

Susel said that the city is currently in a planning phase with two developers to redevelop the old courthouse near downtown Kent.

Unlike the buildings already in construction, Susel said the proposed apartments from the developers for the courthouse location would be rent-per-unit models instead of rent-per-bed models, which would be better for a young couple, professional or family.

Susel said the property could contain between 75 to 150 units depending on which developer the city chooses, and both developers have proposed the possibility of building a grocery store.

“Right now there is no actual final number on the units,” Susel said. She thinks there would be an average of 100 units, but the city does not know which developer it will select to build yet.

“We have not formally entered into an agreement with either developer to construct that project, but both of them are proposing to put some residential units downtown,” she said. “It is anticipated [that] those projects will move forward, but we have not received any formal plans.”

The courthouse isn’t the only proposed redevelopment.

“In addition, there was a developer that came to us to talk about possible redevelopment of an existing site that’s housing over on Summit Street,” Susel said. “It would have an estimated 600 bed-rentals which would be good for students.”

She said she didn’t have a name for the developer or more information about this complex because the developer didn’t want much of this development public yet.

When asked about these apartments and what he thinks they will do for Kent State, freshman Devan Maxwell said, “I feel like it will keep the community centered more around [the] campus.”

Sophomore Riley Samels, on the other hand, doesn’t believe the new apartments will cause any drastic changes. He said he didn’t believe it would bring in new groups of people, just more of the same type of people who already live in Kent.

“There won’t be any new audience because the people who want to live near [the campus] are students and are already here,” he said.

Samels thought that if the new apartments did have a bigger impact, more students would move into the older apartments hoping their rates would drop.