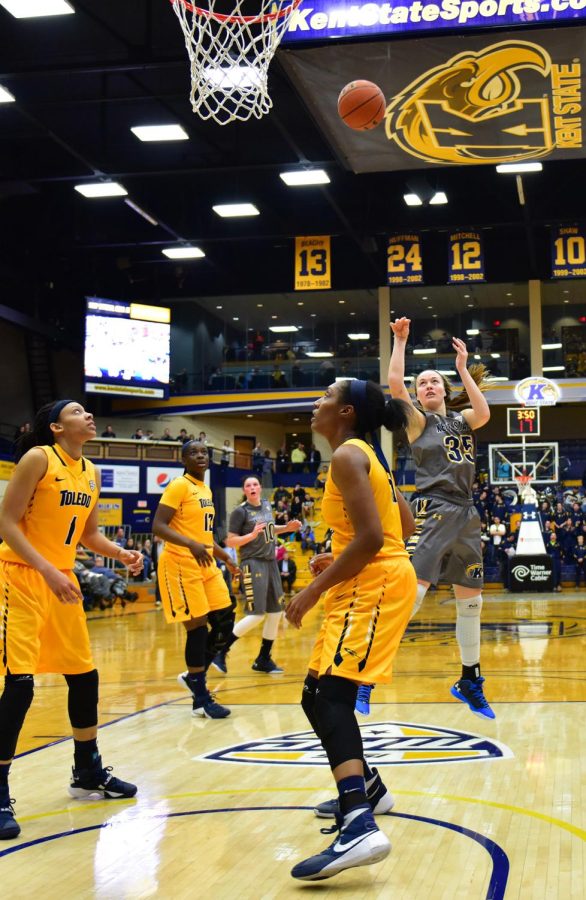 The Flashes shot just a little over five percent, only making one of their 17 attempts from long range. Toledo did not shoot much better, but they made eight of their attempts.

The Flashes started the game out strong and looked determined to put the Rockets away early, scoring the first nine points of the game. But Toledo came back with a 9-0 run of their own led by sophomore guard Jay-Ann Bravo-Harriott, who had a team high of 16.

The Rockets would close the last four minutes of the first quarter outscoring the Flashes 18-6.

In the second quarter it was much of the same. Toledo was able to find a little edge and keep a narrow lead over Kent State. The Flashes were shooting just over 48 percent from the field. Toledo was shooting around 35 percent.

The Flashes saw their sophomore star forward Jordan Korinek come alive in the third quarter as she scored eight of her game high 23 points.

The Flashes battled through the third quarter and finally cut down the 11-point lead and tied the game with 36.8 seconds left.

Lurken finished the game with 13 points and six rebounds.

Also scoring in the double digits for the Flashes was red shirt forward McKenna Stephens who added 12. Toledo’s Brenae Harris finished with 15 and Halee Printz finished with 10 points as she had all 10 in only 11 minutes in the first half.

The Flashes’ next contest comes on Feb.13 as they take on Ball State at home. Tip-off is at 2 p.m.

Eric Pitcher is a sports reporter for The Kent Stater.