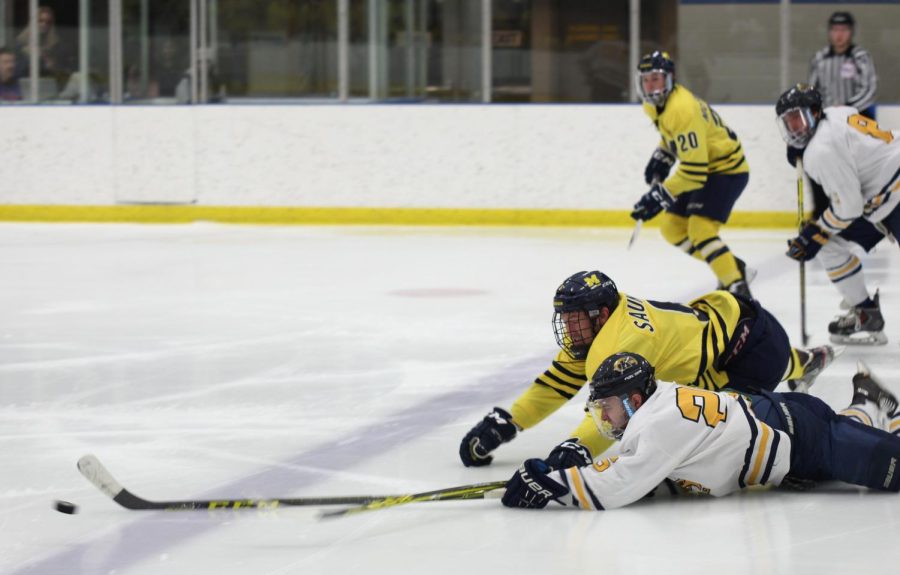 Kent State senior forward Jared Fielden dives toward the puck to get it out of the zone against the University of Michigan Dearborn at home on Friday, Feb. 5, 2016.

The Kent State Hockey Club went head-to-head over the weekend against the University of Michigan-Dearborn, who is currently fighting for first place in the league.

With playoffs only two weeks away, Friday’s 4-1 win over the Wolverines was significant. Michigan-Dearborn is currently in third place in the playoffs, while Kent State is in sixth.

“This was a good win for us, a big win,” said Coach Jim Underwood. “Tonight was a playoff-style game; both teams worked very, very hard. The guys took a lot of hard plays, blocked shots (and) took (and received) a lot of hard body checks. When the dust settled, we were the team that made the least amount of mistakes.”

“It was a great team game,” Buller said. “Everyone worked together tonight and it was the first time that we really played the whole game. It always feels good to beat such a highly ranked team.”

Junior TJ West was also pleased with the way the team played during the first game.

“We were getting into battles and blocked a lot of shots,” said West. “We proved to ourselves that we can hang with this team.”

However Kent State lost their momentum on the second game Saturday night, losing 5-0.

“We didn’t follow our game plan in tonight’s contest,” Underwood said. “We allowed Michigan-Dearborn to dictate the pace of the game. We didn’t slow down their offense attack in the neutral zone, which led to many scoring chances. Early in the third period we lost our jump and energy and ultimately our will to compete. The Wolverines, in return, scored four goals to put the game away.”

Bri Figley is a hockey beat reporter for the Kent Stater. Contact her at [email protected]