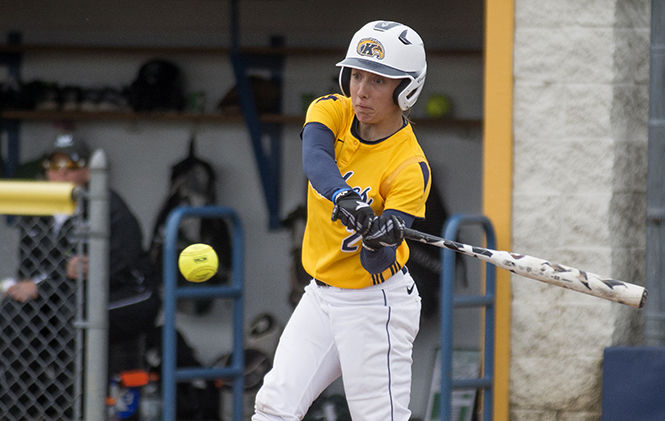 With the bases empty in the bottom of the fifth inning Sunday afternoon, junior Maddy Grimm drove a 2-1 pitch from North Dakota State University’s Kaitlyn Leddy over the right field fence at the University of Louisville’s Ulmer Stadium, giving the Kent State softball team a two-run lead.

But this wasn’t just any home run for Grimm. It was the 37th of her collegiate career, propelling the junior past former Flashes Jamie Fitzpatrick and Jessica Carmichael on the program’s career home run list, as Kent State (12-3) rolled to a 3-2 record in the Red & Black Classic this weekend.

In the first game of the tournament, the Flashes knocked off the University of Louisville, a member of the Atlantic Coast Conference, 13-9, behind Grimm’s 3-3 performance at the plate. Juniors Ronnie Ladines and Janel Hayes split pitching duties for Kent State, giving up eight earned runs on 14 hits.

But the second game of Saturday’s double-header didn’t yield the same result.

North Dakota State University jumped out to an early 11 run advantage – four of which were earned – against Hayes and sophomore Emily Dobbin on 10 combined hits. After Kent State failed to score at the conclusion of the top of the fifth, the game was called due to the NCAA’s mercy rule.

“It’s always important to beat a regional rival. Ladines pitched well and we had success at the plate with two outs,” interim head coach Eric Oakley said. “In the night game, North Dakota State came out quick and we didn’t respond.”

However, the Flashes were able to earn a 6-3 victory over North Dakota State in Sunday’s rematch, thanks to two home runs by sophomore Holly Speers and Grimm’s record-breaking bomb.

Against Louisville later that day, Kent State took an early one run lead in the top of the second after freshman Bailey Brownfield’s base hit scored Speers. Two innings later, Grimm smacked a solo shot that ricocheted off the top of the videoboard.

But the Cardinals scored four runs in the bottom of the fifth and added two more the following inning to secure a 6-3 victory.