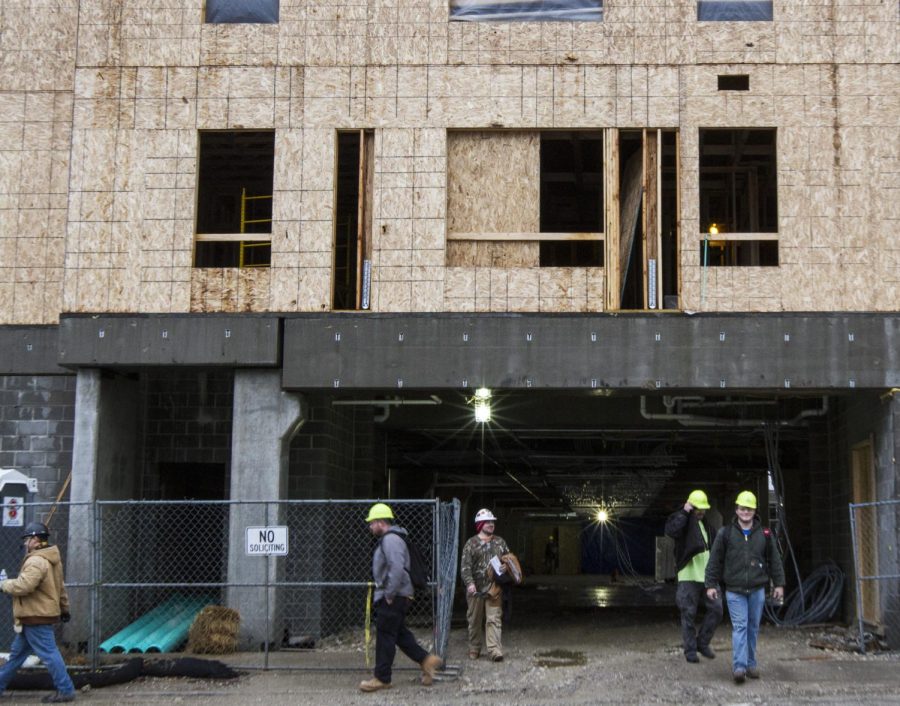 Construction workers leave the site of the 345 Flats on the corner of Summit and Depeyster Street on Wednesday, Feb. 24, 2016.

A stretch of East Summit Street, from Fraternity Circle to just past Loop Road, will follow a one-way eastbound traffic pattern beginning on March 7. The pattern is scheduled to remain in effect through November. New PARTA routes will take effect on February 29, ahead of the traffic pattern change. Access to streets and parking lots in the area shouldn’t be affected.

The change comes as part of a collaboration between the University and the City of Kent that began last fall.

The project’s aim is to reduce congestion and increase safety on East Summit Street between Loop Road and Lincoln Street – a stretch that was determined to be the most congested segment of non-freeway road in both Portage and Summit counties in the Akron Metropolitan Area Transportation Study. Improvements made during the project will include roundabouts to relieve congestion at intersections, as well as more sidewalks, crosswalks and bike lanes.

According to Jim Bowling, the City of Kent’s superintendent of engineering, the new pattern is an inevitable consequence of large scale jobs like the Summit Street project.

“We can’t build a road while cars are on it,” he said.

The north side of the road will be rebuilt first, allowing cars to travel east in the opposite lane, Bowling said. Once the north side is complete, work will begin on the southern lane.

Bowling said that a number of factors went into the decision for traffic to flow east, rather than west, but the key factor was safety.

“The fire station is on the west side of campus, so they need to be able to get through,” he said. “Emergency response time was critical.”

“A committee of city, university and PARTA representatives has been working to minimize the disruptions, but you should expect delays and you should allow more time to reach your destination,” a Flashline announcement read.

“That sounds terrible. That is going to be so much work,” freshman photojournalism student Serina Barry said. Barry takes classes at Kent State University’s Stark campus but works and socializes in Kent.

“I was thinking about summer classes up here, but now maybe not,” she added.

Taylor Kerns is a parking and transportation reporter. For more information contact her at [email protected]