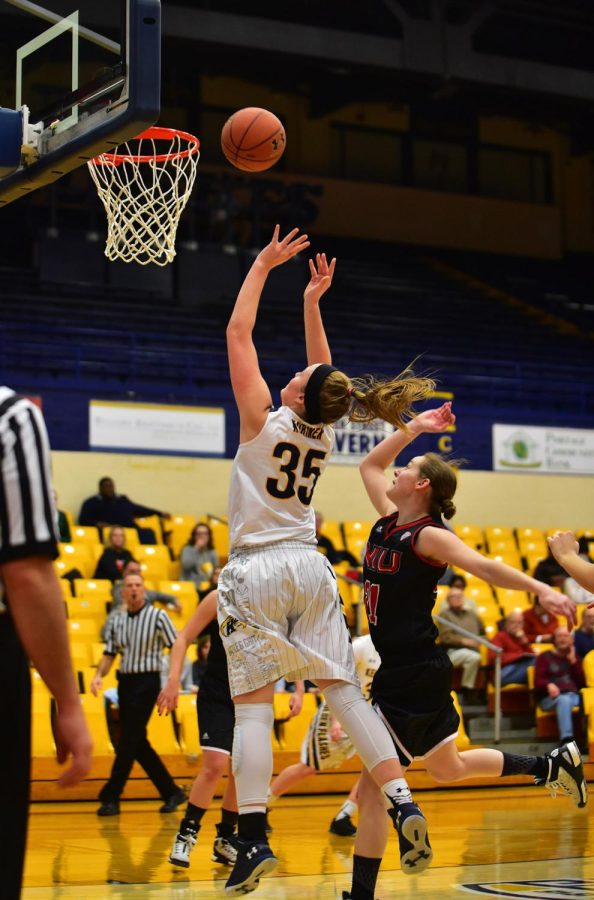 Sophomore forward Jordan Korinek shoots a layup in the game against Northern Illinois University on Wednesday, Jan. 27, 2015. The Flashes won 95-85.

It was a defensive battle as both teams shot under 37 percent from the field and both were able to force a lot of turnovers. Despite having 22 turnovers compared to Kent State’s 15, the Red Hawks were able to make up the difference by shooting 83 percent from the free-throw line. The Flashes knocked down only 13 of their 22 attempts.

This was a back and forth game throughout, with neither team being able to really take advantage of the other’s turnovers. In the second quarter it seemed as if the Flashes had finally found their stride. They ended the first quarter with four straight baskets despite starting out one of 11 from the field. After making four in a row and coming out hot in the second, the Flashes would go on a 21-6 run between the end of the first and halfway through the second. Kent State took a 25-17 lead into halftime.

Coming down with three big offensive rebounds in a row, sophomore guard Ana Richter was the turning point in this game for Miami. The Red Hawks were able to capitalize on these rebounds, putting them back up and finally taking a lead of their own.

The Flashes kept looking to Larissa Lurken, but the junior guard had an off night shooting the basketball. Going three of 15 from the field, however she was able to sink seven of her 11 attempts from the line, finishing the game with a team-high 13 points.

Lurken wasn’t the only one struggling. The team as a whole shot 17 of 56 from the field.

Sophomore guard Jazz Smith led the way for the Red Hawks with a game-high 14 points. Freshman Kristen Levering added 10 points and six rebounds for the night.

Eric Pitcher is a sports reporter for the Kent Stater. Contact him at [email protected]