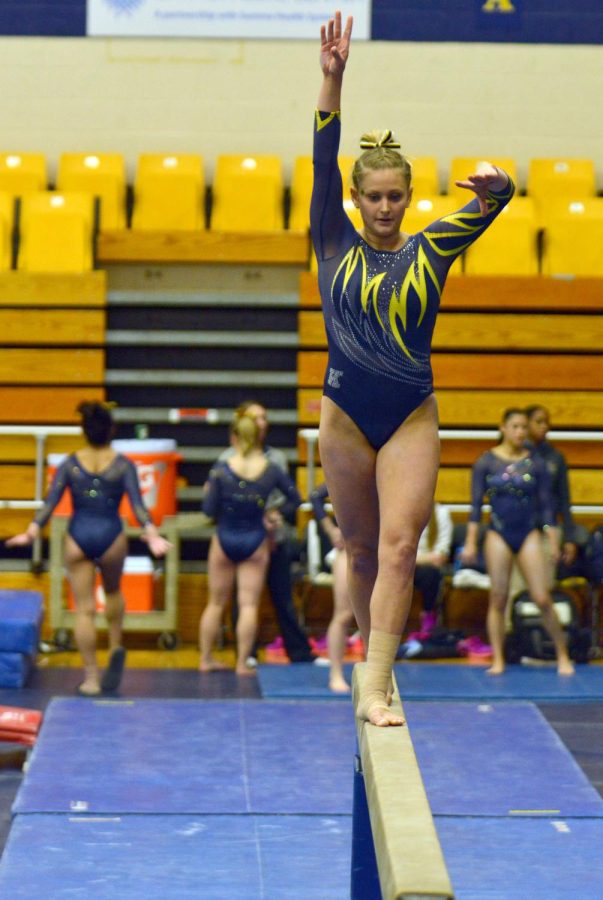 Stypinski moved on to the balance beam, where she earned 9.900 points and another first place finish.

She ended the meet with an uncontested 9.925 on the floor exercise and walked off with cheers from the audience and a few standing ovations.

“I am probably about as happy as I’ve been in a long time,” Biggin said. “(Kent State) competed so well together as a team. This is really what we’ve been looking for.”

The team scored a season-high 49.250 on the floor exercise, an event that Biggin said they struggled with during the last home meet. Mistakes from two seniors caused the Flashes to lose the Feb. 7 meet in the final rotation by a quarter of a tenth of a point.

“A couple weeks ago, we were kind of in the same position with George Washington University,” Biggin said. “I had a talk with (the team) before, and I said ‘Listen, we’ve been here before and you guys know what happened last time. We gave away the meet last time. We don’t give away the meet this time.’”

“They did a great job just stepping up,” Biggin said. “Every time (a coach) asked something of (a gymnast), they did their best and the next gymnast went and did the same thing. That’s how you perform as a team.”

Stypinski said Sunday’s meet felt like a fun practice rather than a stressful competition because the team was relaxed. She attributed this to a lot of preparation.

“We worked really hard this week,” Stypinski said. “We definitely tried to keep up the energy in the gym. We did our own pressure sets without the coaches calling them. We’d go over and try to make (the girl competing) laugh or make them uncomfortable so they get ready for all the pressure we have in meets and it paid off.”

Marrero agreed that practice made a difference in the team’s performance.

“I think (Sunday) went amazing,” Marrero said. “We were all really confident, and we went out there knowing we were going to do really good as a team. I’m really proud of what we did today.”

Stypinski’s mother, Marci Stypinski, said the family traveled six hours to see Rachel compete and it was worth it.

“The (Kent State) team is amazing,” Marci said. “(The Flashes) have incredible potential to continue to believe in themselves, be a team and strive to the top.”

The Flashes also competed in front of Kent State alumn and former gymnast Marie Case. Case competed on the Kent State gymnastics team from 2010 to 2014 and now serves as an assistant coach for Bowling Green’s gymnastics team. Biggin said Case will do a great job coaching the Falcons.

“I’m really happy for her,” Biggin said. “She’s moving on and doing great things. Obviously we didn’t want her to win today, but I couldn’t be more pleased with how she’s helping Bowling Green out. It was a fun meet to have.”

Elise Kogelnik is a gymnastics beat reporter for The Kent Stater. Contact her at [email protected]