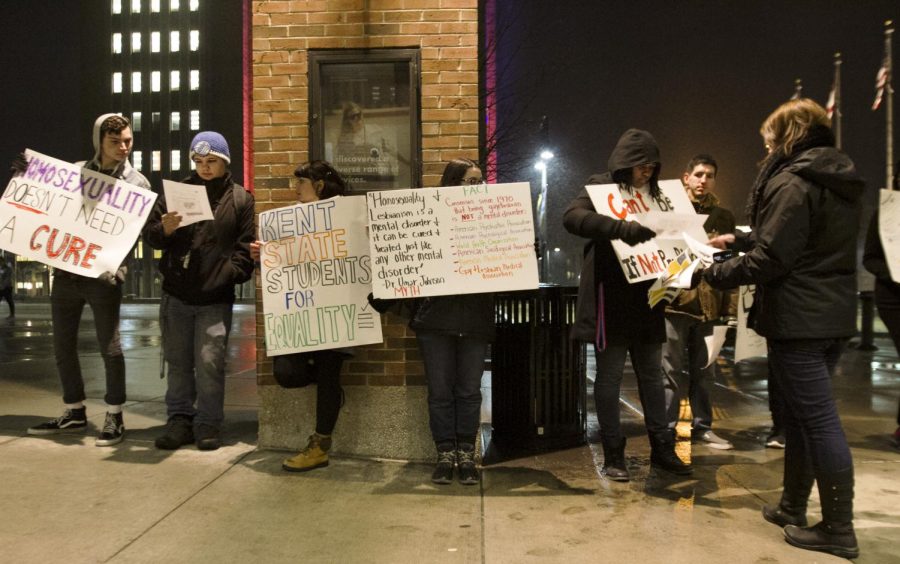 Protestors line up outside the KIVA to show their opposition to Dr. Umar Johnson speaking at the university on Monday, Feb. 8, 2016.

Umar Johnson, a controversial speaker known both for his outspoken views on black oppression and his polarizing comments on the gay and feminist communities, spoke tonight at the KIVA.

His appearance was organized by the Kent State student group L.O.C.K.S., which hoped to focus on Johnson’s history as a proponent of Pan-Africanism over his inflammatory remarks.

A concerned coalition of students attempting to raise awareness of his presence and its implications on the integrity and views of the University, gathered outside to demonstrate against the presentation.

Canfield hoped the gathering would raise awareness of Johnson’s past.

Students lined the walkway that led into the KIVA shortly before 7 p.m., when Johnson was set to begin his speech. Several held signs proclaiming opposition to his stance against the gay community.

Not all students walking in were aware of the provocative nature of the event.

“I’ve heard a few things, but I’m not really too concerned about it. He speaks about a lot of issues that I’m concerned about, so I want to go in and see what he has to say,” said freshman Jonathan Grant.

The students gathered to protest the appearance seemed more sure of their opposition. Among them was Gabrielle Cooper, a senior human development major.

“I am here, personally, because a student organization brought Dr. Umar Johnson here to speak on behalf of Black History Month, and he has some views against the LGBTQ community and black feminists that are very controversial”, Cooper said. “He believes that homosexuality can be cured, that it’s a mental illness, and that it’s connected with pedophilia.”

“You can find all of this on YouTube”, Cooper testified. “I’m here to bring awareness to people going in and people walking by about what his views are.”

Some of the concerned coalition anticipated making statements during the speech.

“We do have people here that will be going in. (They will be making) statements, comments, and asking questions during the Q and A,” Cooper said.

The fact that the University sanctioned Johnson’s presence was a sore point.

The accepting atmosphere the University has attempted to foster was shattered for some.

“We have been told by multiple Kent faculty that this is a safe place for all of us- gay, straight, black, white, and his opinions and views are hindering that,” said protesting student Katelyn Rinella. She confirmed that she would be among those entering the event to question Johnson.

At the time of the demonstration, the student organizers of L.O.C.K.S. made no comment on the outcry.