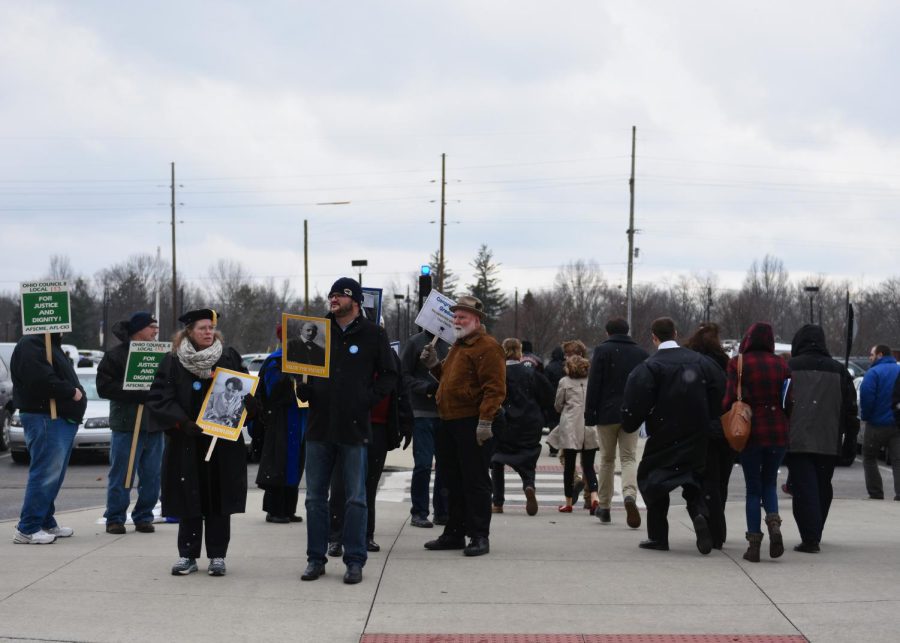 Todd Hawley, center with blue button, along with members of both AAUP_KSU and AFSCME, stands outside the M.A.C. Center picketing after the commencement ceremonies on Sat. Dec. 19, 2015.

Kent State’s American Association of University Professors (AAUP-KSU) and the university have reached a tentative agreement on a new contract, according to an email sent by AAUP-KSU’s president Jennifer Larson and a university press release.

“It is a report from an impartial third-party who came in to look at the issues,” said William Sledzik, the AAUP-KSU spokesperson. “It doesn’t have everything we’d like to see in it and I’m sure the other side feels the same way, but what we see here is a pretty fair and equitable proposal, so our advisory board has voted to move forward.”

The full membership of the AAUP-KSU will have the report available on Tuesday and will be asked to vote by midnight Friday. The AAUP-KSU will meet Wednesday to discuss the details of the tentative agreement and the fact-finder’s report. The AAUP-KSU leadership will ask the membership to approve the contract, Sledzik said.

“It’s up to them (members) on how they vote, but we’re optimistic,” Sledzik said. “Once the membership approves the contract proposal and ratifies the agreement, we will have a contract and we can all go back to work.”