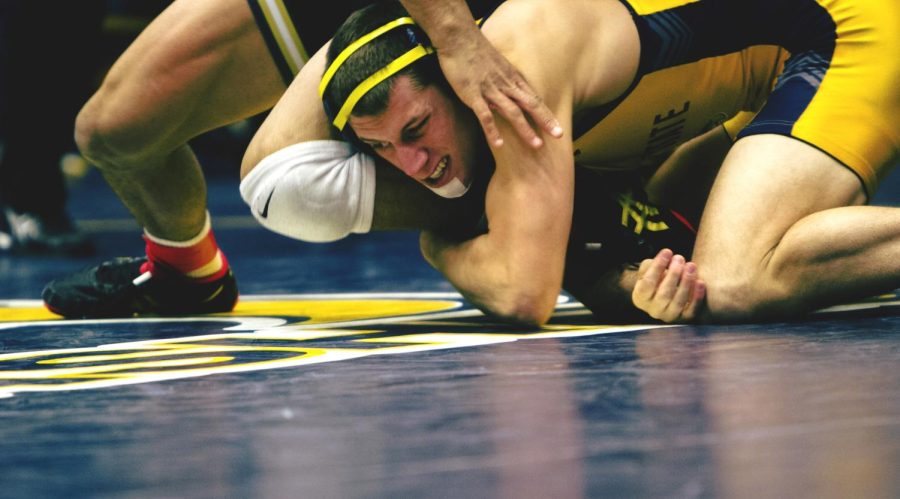 5th-year Senior Tyler Buckwalter works for a single leg takedown against Daniel Lewis of the University of Missouri at the MAC Center on Dec. 20, 2016. The Golden Flashes lost to Missouri 12-35.

The Flashes were down 9-3 to the rival Bobcats on Friday, but a pin by 197-pound redshirt freshman Kyle Conel sparked the Flashes’ comeback and eventual 20-15 win.

Conel tied the score for the Flashes after heading into the third period with a 4-3 deficit. His six-point pin came after being named MAC Wrestler of the Week, the third Kent State wrestler to win the honor this season. The pin also kept Conel’s undefeated dual meet record intact.

Both teams had five wins, but Conel’s pin and fifth-year senior 149-pounder Mike DePalma’s technical fall in the last match gave the Flashes the victory.

The Bobcats could have sealed a victory with a win in the 141-pound match; however, Flashes sophomore Anthony Tutolo won on an escape in overtime, tying the score again. DePalma finished off Ohio with his win in the final match.

Sunday, the Flashes found themselves in a 14-6 hole before ending the meet with a 13-0 run, started by fifth-year senior 133-pounder Mack McGuire’s major decision.

Tutolo, DePalma, and Miller were able to sweep the final matches with three-point decisions. Conel was also able to stay undefeated in duals with his decision.

Kent State is now 10-3 overall and 3-1 in the MAC. The Flashes will face Old Dominion University at 2 p.m. on Sunday at the M.A.C. Center.