USG to vote on making syllabus available in time for scheduling 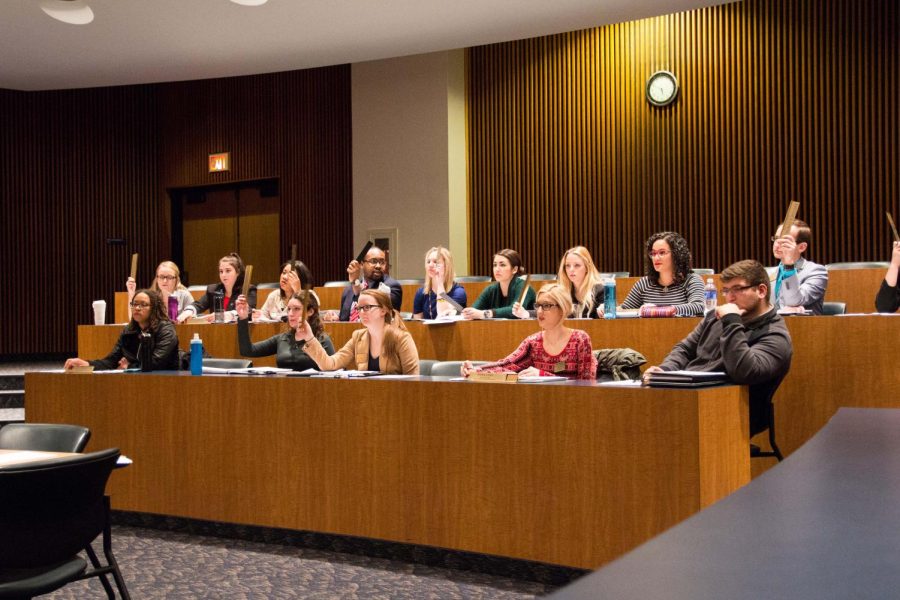 USG Senators take a vote on an student's individual conference request during a meeting on Wednesday, Jan. 27, 2016. Students and organizations can submit requests to the USG Allocations Committee for funding to attend conferences.

According to Brian Cannon, Kent State’s Executive Director of USG, “We wrote up a resolution similar to theirs and had a first reading at our last meeting. Why reinvent the wheel?”

Cannon said that other universities’ USG’s were in the process of enacting similar policies, stating that there is communication between USG leaders, allowing them to exchange ideas while putting subtle tweaks on the bill for their respective universities

“Basically, we want it so when you look up and register for courses, a little tab would drop down and have the syllabus (for the class),” Cannon said.

The decision passed with a unanimous vote at The Ohio State University.

“There is no question in my mind it will pass. All students I’ve talked to, like students just around the Student Center and other student government members, and they’re all for it,” Cannon said.

Students’ reactions, such as freshman political science major Chazz Ware, would back up his sentiment.

“I like to check and see if the syllabus is there before the first day of class anyway, so I would definitely check to see what I would have to do in a class while signing up,” Ware said.

“I’ve had classes where the work load ends up being more than the workload for my major classes. If I could check while signing up I would avoid those,” she added.

Cannon said she believes having early access to a syllabus would assist students in more ways than one.

“Getting the syllabus the first day can be somewhat of a financial burden,” Cannon said. “When I only have three days to get a textbook, I don’t really have time to shop around for the cheapest option. It’s also a huge stressor.”

Undergraduate students were not the only ones showing support for the resolution. Geography department grad appointee, Johnathan Kirk agrees with the resolution.

“In general, I think it would be a good idea for the students because they could see what to expect,” Kirk said.

Kirk said he would have appreciated having such a service when he was an undergraduate student, “For sure I would have looked.”

He didn’t seem to mind having to upload the syllabus. “From my standpoint if you have to do it you have to do it. Students already get a brief description of the course, but now they can get a full breakdown..It might prevent first week drops. Either way these could be good things because they can get the most interested students in the class and keep them here.”

The official vote for the resolution is February 10.