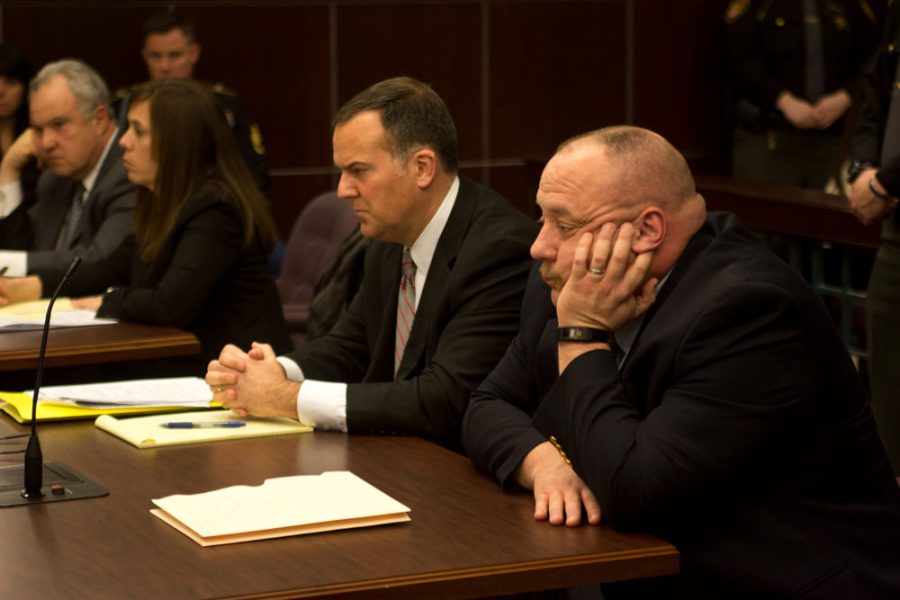 Former Brimfield Police Chief David Oliver (far right) listens to his former subordinate's, Crystal Casterline, testimony against him. Oliver was found guilty of all charges against him. He was sentenced to 600 days in jail as well as $2,304 in fines and restitution.

Oliver pleaded no contest to the four charges and will never be a police officer again.

In an opening statement, Oliver said “small town politics” had a role in his court showing. He referenced former coworkers showing up in the courtroom just to spite him.

“When you are the boss, you don’t make a lot of friends,” Oliver said.

Oliver became a sensation on Facebook for his humorous posts about criminal suspects. Between telling college students to not be “drunk princesses” and writing a letter to Kanye West to “check himself,” he drew attention to himself in the media and was featured in articles from Huffington Post, the New York Daily News and TMZ.

Rapidly, his Facebook page gained followers, shares and comments. The small-town police officer published a book titled “No Mopes Allowed: A Small Town Police Chief Rants and Babbles about Hugs and High Fives, Meth Busts, Internet Celebrity, and Other Adventures… ” in 2013, detailing his life as a conservative, straight-shooting police officer. “A mope is someone who leeches off of society and usually breaks the law,” he wrote.

Having worked in the police department since 1994, Oliver served as police chief for 10 years. He was active in charity, played the role of a superhero at elementary school visits and hosted a weekend show on local radio station WNIR.

At the time, Oliver said his resignation was due to health concerns. However, the same day, Oliver ended his career at the Brimfield department, Officer Crystal Casterline came forward.

The police chief’s support meant the charges, made public by Casterline in January 2015, came as a shock to the Brimfield community. Hateful interactions between supporters and opposers of Oliver flooded the Brimfield department’s Facebook.

On Monday, Casterline testified against Oliver for sexually harassing and assaulting her and placing arbitrary rules in front of her, which made it more difficult for her to do her job. These rules were cited as “gender discrimination” in 2015, placing Oliver on suspension. He resigned two days later.

“My dream had become true and I was a police officer,” Casterline said. “I loved my community.”

With the increased popularity of the Facebook page came suspicions as to whether Oliver was handling his role as police chief properly. In her testimony, Casterline compared her relationship with Oliver to a case of domestic violence: Casterline the naive victim, Oliver the physical and mental abuser.

According to Casterline, she specifically spoke with Oliver about her being uncomfortable with his need to hug her. Casterline even received warnings from other female police officers, saying how Oliver was very “handsy.”

“The hugs escalated to groping me, humping me, tracking me places, forcing me into positions where he pressed his body into mine, forcing me to dance with him, restraining me for long periods,” Casterline said.

She went on to describe how Oliver would text her phone asking her what she was wearing, and (telling her) how he would train her if Casterline was his wife.

In fear of being fired, Casterline waited until her first year at Brimfield came to an end to go public with Oliver’s misconduct. She suffered anxiety attacks, vocal cord dysfunction from extreme trauma and said she wished to end her life. Her home was vandalized. She received threats in her mailbox. Her children were taunted at school, Casterline said.

“I have been very vocal that I do not support this plea,” Casterline said. “I believe David Oliver should be held to a higher standard, not receive a get-out-of-jail-free card.”

Before judge Laurie Pittman sentenced Oliver to 24 months of probation, she expressed her disappointment in the police chief.

“You let the people of Brimfield down. You let law enforcement down,” Pittman said. “You’ve become the mope you wrote about.”

Payton Moore is a senior reporter for The Kent Stater. Contact her at [email protected]