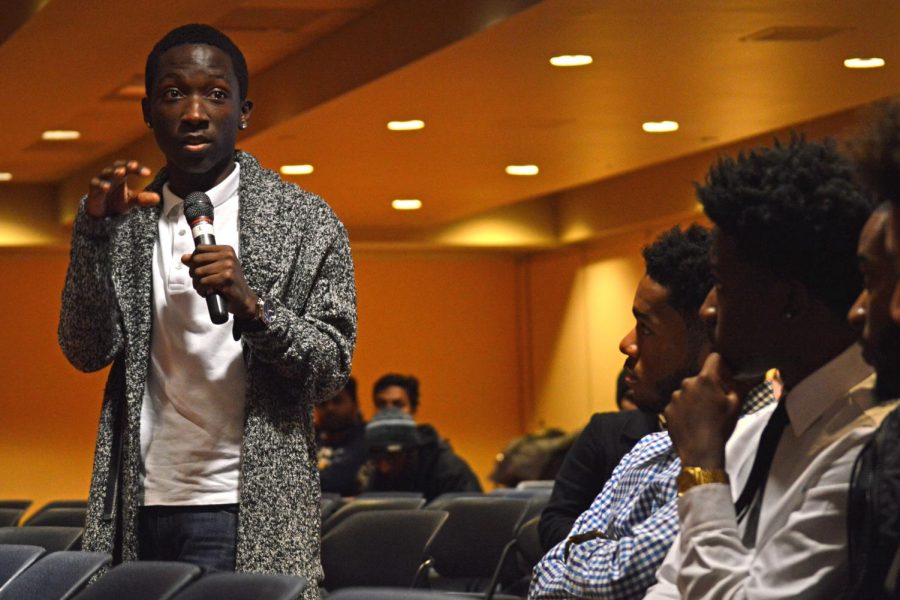 Sophomore fashion merchandising major Emonte Wimbush talks about his experiences with race and diversity at Kent Talks in the Student Center Ballroom Balcony on Tuesday, Jan. 26, 2016.

With an emphasis on “keeping it real,” eight Kent State student panelists, ranging in years from sophomore to PhD candidates, got together in the Student Center Ballroom Balcony Tuesday night for a KentTalks discussion on Kent State’s core values, focusing on diversity among the university. Director of Economic Development and Community Relations Kelvin Berry, moderated the panelists throughout the night, giving them prepared questions.

Kent State’s nine main core values were emphasized throughout the night. The nine include the diversity of culture, beliefs, identity, thought, freedom of expression, free exchange of ideas, respect, kindness and purpose.

Before the panel opened, Berry emphasized the importance of welcoming all attendees’ opinions.

“The only thing I ask is to keep it real,” Berry said. “Let us know what you really think.”

The question was asked, “What does diversity mean to you?” Panelists’ responses included answers such as “different” and “unique.” Ph.D candidate Mayagul Satlykgylyjova expressed her displeasure with how diversity is treated.

“When it comes to Kent State, it’s still a work in progress,” said Emonte Wimbush, a sophomore fashion merchandising major. “I feel like I’m not excelling at the rate that I should because I’m being taught by professors who are biased toward fashion being dominated by women, when most of the designers in the field are male.”

Senior assistant to the president, Debra Berry, was in attendance along with approximately 50 members of the Kent State staff and student body.

Debra said there are things done at Kent State to make students feel they are a part of a larger group and a community.

“I’ve always tried to make people feel like this is home,” she said.

A point throughout the night reiterated by Berry was the purpose of KentTalks being meant as a way to open dialogue.

“Don’t underestimate the importance of talking,” Berry said. “That’s how things begin to take shape. I think (these talks) are a starting point. There’s no way that a person who’s not a person of color can see the world through the eyes of a person of color unless we talk.”

When the topic of inclusion and feeling of value at Kent State was brought up, one panel member had a very strong stance on the matter.

“It depends on the social setting,” said Alaysia Avila, a senior fashion merchandising major. “Unless they see you as a prodigy, they won’t spend much time with you, they won’t invest into your future.

To conclude the panel, Berry left the audience by bringing up the adage of America as a melting pot of diversity. In his eyes though, the melting pot doesn’t accurately represent what Kent State should strive for when it comes to diversity.

“Think of our university system and all of our campuses. Instead of a melting pot, (they could be viewed) as a fresh and changing salad,” Berry said. “Every ingredient is encouraged to remain who they are, while every ingredient is still valued.”

Jack Kopanski is the performing arts reporter for The Kent Stater, contact him at [email protected]