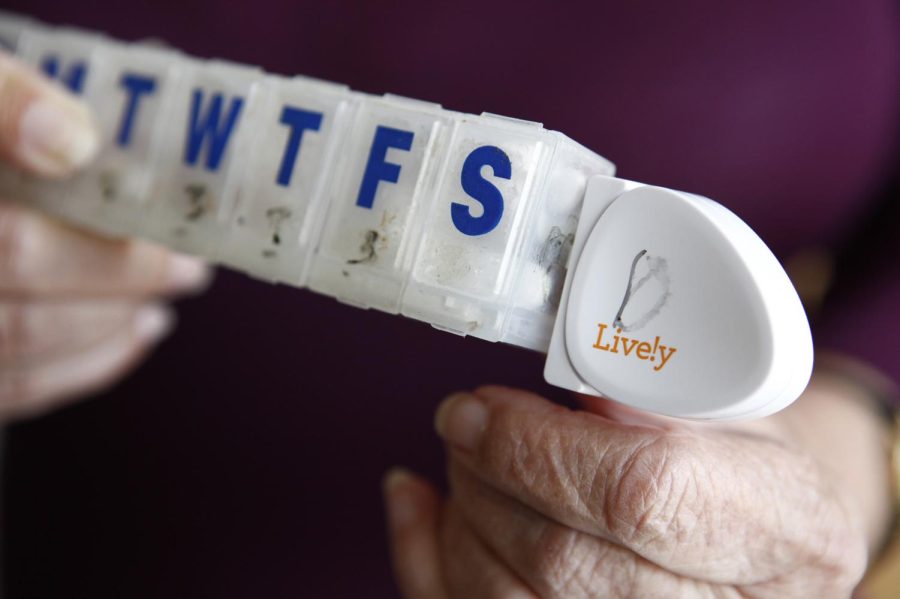 Dorothy Dworsky holds her pill case with an attached Lively activity sensor on May 16, 2014 at her home in San Francisco, Calif.

When college students start to feel a cold or flu coming on, they should not run to their doctors for an antibiotic.

Antibiotics are important in the treatment of bacterial infections; however, there are several misconceptions about them. For instance, many believe that antibiotics can treat viral infections, such as colds and flus, according to Shirley Hemminger, an associate lecturer in the College of Nursing.

However, the Centers for Disease Control and Prevention released a statement on Nov. 16 that informed the public this was not the case.

This misuse of antibiotics for viral infections could potentially cause problems for users. According to professors from the College of Public Health, antibiotics not only destroy the unhealthy bacteria inside our bodies, they can destroy healthy bacteria, too.

“You have to think of your body as an ecosystem. It has many different species that live in it,” said Tara Smith, an associate professor in the College of Public Health’s epidemiology/biostatistics department. “Whenever you take an antibiotic, you kill off some of that, so you can allow other things to flourish.”

Other problems can occur from the misuse of antibiotics, such as bacteria developing a resistance to these antibiotics, said Bhavin Mistry, assistant professor of Pharmacy Practice at the Northeast Ohio Medical School.

“For my students, I use the analogy of a toolbox … if the bacteria is resistant to antibiotics, it will have a specific ‘tool’ to defend itself,” Mistry said. “Over time, they collect more and more ‘tools’ and bacteria are rather promiscuous and will share their information [tools] with other bacteria.”

This is what creates the antibiotic resistant “superbugs,” and resistance to bacteria-killing antibiotics fuels these stubborn illnesses.

“We are getting to the point where superbugs are resistant to all antibiotics, and we have nothing else,” Mistry said.

Although these superbugs are resistant to antibiotics, the strongest offense anyone can have against these illnesses is the body’s immune system, according to Mistry.

“The body still has to do all the heavy lifting,” said Mistry.

What can people do to build their immune system and protect themselves from resistant bacteria and superbugs? Mistry and Hemminger stress the importance of having patients listen to their doctors and avoid asking for and receiving prescriptions for unneeded antibiotics. Patients should allow their bodies to heal on their own.

“Sometimes you just have to ride it out,” Hemminger said. “Just rest … your body wants sleep; it needs sleep.”

Hemminger added that it is also important for people to focus on their nutrition and get adequate hydration.

Christopher Woolverton, a professor of environmental health sciences for the College of Public Health, specializes in infectious disease microbiology. He believes people can handle diseases before they arise.

“If you can prevent getting an infection from the get-go, you won’t need the antibiotic,” Woolverton said. “Handwashing is probably the best preventative measure you could take to help stem the infectious process.”

Woolverton wished to emphasize one final point: No age group is immune to bacterial infections; therefore, antibiotics are still useful.

“College students still have that super hero mentality,” Woolverton said. “We try to teach them that … you are susceptible, and you are just as susceptible as anyone else when it comes to bacteria.”

Lauryn Rosinski is the public health and podiatry reporter for The Kent Stater. Contact her at [email protected]