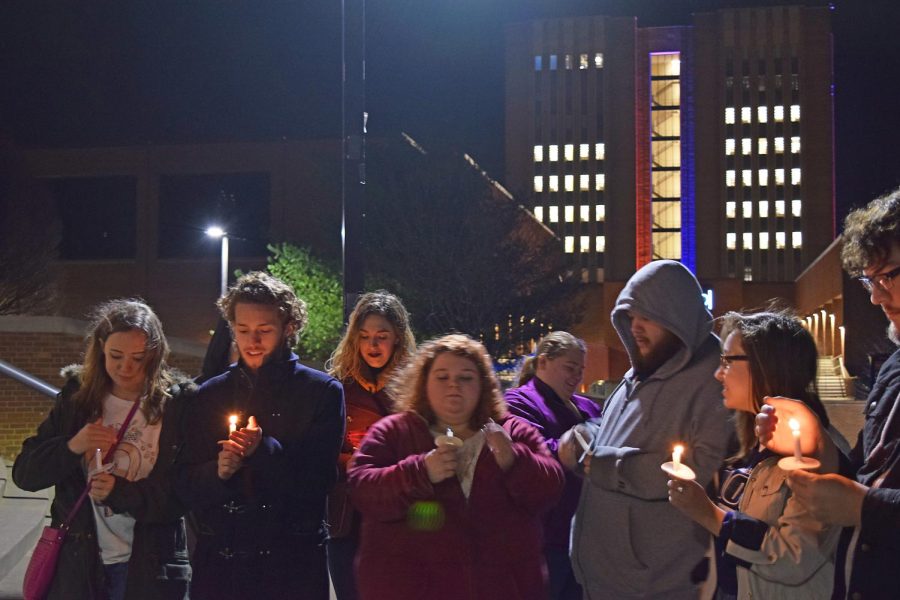 The vigil was held for the victims who were found dead after a shooting at a Planned Parenthood center in Colorado Springs, Colo., on Nov. 27.

The night began with a short speech from Taba Aleem, Planned Parenthood of Greater Ohio’s manager of external affairs.

“Our hearts go out to the victims,” she said. “This is an unconscionable tragedy.”

Aleem expressed her concern over government officials “biting down and digging deeper” on Planned Parenthood clinics. She listed a number of differences the organization provides, some being health services, STD testing and treatment, cancer treatment, and abortions.

“When you have hateful rhetoric (toward the clinic), it incites violence,” she said.

Next, Rachel Mass, a sophomore English major, recited a poem titled “Translations” by writer Adrian Rich. There was then a candle lighting and a moment of silence.

At the conclusion of this time, Grace Goodluck, a junior political science major, shared some words. She expressed that upon reading about this shooting, it was one of the first times she came to the realization that it could have been her. Goodluck also said she saw a lack of these issues being addressed in our society.

“There is no acknowledgement of rape culture,” she said.

To finish off the event, Rachel Albon, a junior communication studies major and president of Kent State KSURGE, spoke about how to get involved within the newly formed student organization. The group is affiliated with URGE, a national organization that stands for reproductive justice.

“College campus women need these services,” Goodluck said. “We need to show support for an organization that provides them.”

Kelly Powell is the religion reporter for The Kent Stater. Contact her at [email protected]