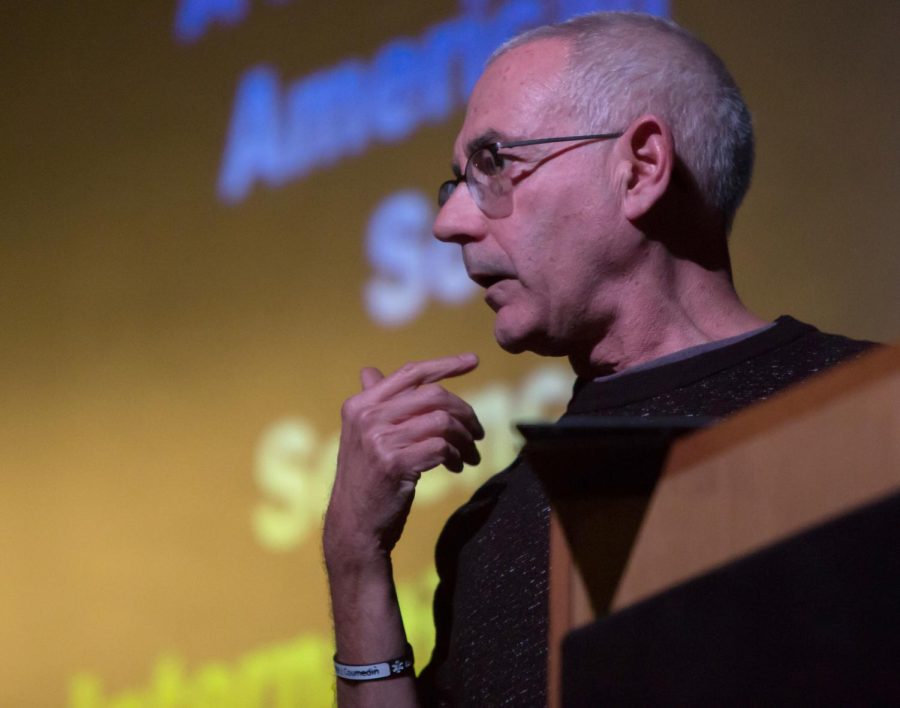 The most recent installment of Kent State’s Safe Spaces series was more than just a presentation to those attending: It was a timely discussion of race, its place in history and a platform for student voices to discuss their opinions about something that’s becoming a national issue

“We want to demonstrate how we can collaborate across disciplines but also across (differences),” said Amoaba Gooden, the chair of the Department of Pan-African Studies. “Given the events recently at Missouri and Yale, this is really relevant.

The event took place Wednesday in the Oscar Ritchie Hall Theater and was entitled, “A Mongrel-American Social Science: Minority Voices in the Academia.”

Academia has long been a place where racial relations are brought under a microscope, said Joshua Stacher, an associate professor in the political science department.

“In the 1920s, 30s, 40s and 50s, there were African-American academics…who were pushing back on these narratives (of imperialism)…talking about race and they were basically scrubbed from the literature,” Stacher said. “This was including the whole idea of international relations — it used to be called race relations.”

The goal of providing a space to discuss difficult topics was still the main point of the evening, as in past events, despite its volatile theme.

“Like most Safe Spaces events, I think this is a chance to reset the dialogue and have an honest discussion about these invisible ways that African-Americans and other groups have been marginalized, especially in the academic literature,” Stacher said.

However, the event in particular was in the spotlight of recent tension on college campuses around the nation, such as the University of Missouri. The event was the first in the Safe Spaces series attended by President Beverly Warren, who said the conversation was relevant not only to the student body but to the Kent State community as a whole.

“The nation is fraught with polarities,” Gooden said. “There’s so much going on that I think (something like Missouri) could happen anywhere in the United States and Kent is not immune to that.”

The historical nature of imperialism served as a catalyst in the importance of open discussion in light of recent national tensions and local events, such as the casting of a white actor in the role of Martin Luther King, Jr. earlier this fall for a stage adaptation of his life.

“One of the things that people are very upset about on college campuses like Missouri and Yale, and even last year on our campus, is the culture of white privilege and white supremacy,” Stacher said. “What happens with a lack of diversity is that it causes a lot of groupthink. It can be something simple, like, ‘How long does it take you to do your hair?’ or ‘You speak so eloquently.’”

The event aimed to disrupt this group mentality.

“People are frustrated,” Stacher said, “and they’re frustrated because they don’t feel that they are heard or taken seriously.”

“We are in the midst of a national student movement against racism,” Wimbush said. “While this campus may not be protesting right now, many of the same conditions and frustrations that exist at Mizzou or Yale are present here.”

The guest speaker was Bob Vitalis, a professor of political science from the University of Pennsylvania. This introductory blend of current events and historical shaping of the black experience was evident from the beginning of Vitalis’ presentation as he read from his recently published book, “White World Order, Black Power Politics.”

“I challenge you from the very first line of this book: In the first decades of the twentieth century, international relations meant racial relations,” Vitalis said.

There is a deep culture-created gap between international relations and racial experience, and according to Vitalis, they are deeply entangled.

“The reality is that for the professors writing the textbooks, the units and boundaries that mattered were biological boundaries, not territorial ones,” he said. “It’s conventional to argue that the first journal of international relations was called ‘International Affairs,’ but as I discovered, the first journal was the ‘Journal of Race Development.’”

Vitalis went on to trace his history of studying the progression of foreign affairs and the absence of black voices in academia.

“Howard has been written out,” he said. “It remained ‘terra incognita’ in all respects in the discipline of international relations until now. Most histories and most disciplines are produced by insiders.”

The emphasis circled back to rest on the fact that the history and experience of international relations has largely written the African-American voice out of its history.

“Decades of a practice are made to disappear,” he said. “Even though international relations was not talking about racism in the 1960s, racism actually grew more visible in international politics. No issue was debated more in the general assembly.”

Vitalis intended to uncover the buried history of the cross-over of international politics and racial dialogue.

“I hope it will motivate some of you to think about this: How did the discipline (international relations) escape black studies, and at what cost?”

Gooden helped to engage the audience in a discussion with Vitalis, with questions that ranged from the fairness of Kent State’s instruction on international relations to historical clarifications.

“The question to ask today is what theories and what claims are sustaining international hierarchy,” Vitalis said. “Hierarchy is all over the discipline. There are people studying how racism works in the world today, but they are not part of the canon. Black thinkers: They are the only ones reading black thinkers.”

As the Safe Spaces event series has unfolded, it has remained an area of discussion for students and a platform for minority voices. It has also evolved into a blending of societal critique and relevancy of conversation and learning.

“Tonight’s talk was about history and recovering that history, but it could also be seen as a call to action,” Stacher said.

The next Safe Spaces event will be next semester on Feb. 10, with more information and topics to be announced closer to the event date.

Cameron Gorman is a general assignment reporter for The Kent Stater. Contact her at [email protected]