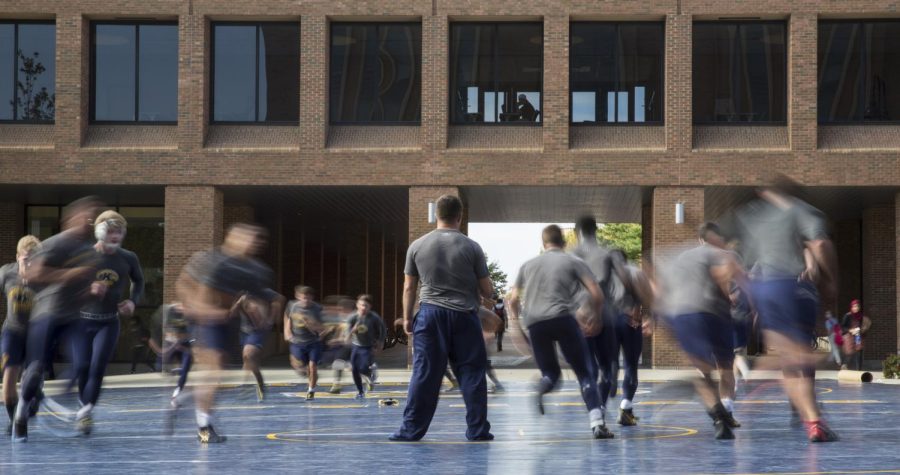 Members of the Kent State Wrestling team jog around the mats set up in Risman Plaza for their third annual outdoor wrestling practice. Oct. 12, 2015.

The Kent State wrestling team will head into its first dual meet of the season with more of an emphasis on easing into the season.

Flashes head coach Jim Andrassy said this year the team will be able to work its way into the schedule rather than having to face the best teams in the country.

“Last year I think we wrestled Ohio State, Michigan State, Illinois and maybe someone else within the first two weeks of the season,” he said. “Our guys just weren’t mature enough and we just didn’t handle it well. From there it was just like we never got healthy, and it just became a snowball effect. We had a lot of guys get injured.”

Every team looks to stay healthy, but Andrassy emphasizes the desire to do so. The Flashes will start that way this season, with one important exception.

“For the rest of the year,” Andrassy said, referring to junior heavyweight Mimmo Lytle’s injury. “He’s out as of right now. It’s a huge concern for me as a coach.”

Lytle was one of four Kent State wrestlers to be named top-four in his weight class in the Mid-American Conference preseason poll.

At the Clarion Open last Sunday, the Flashes had two heavyweight wrestlers participate, one being sophomore Stephen Suglio, who made his debut in the weight class. Andrassy said nothing has been resolved as far as the heavyweights are concerned.

“The reason we bumped Stephen up is we think (redshirt freshman Devin Nye) can be really good, he just needs experience as well,” Andrassy said. “Our plan with Devin was for him to be a two-year starter. Now all of a sudden it’s his freshman year and he’s starting. So it’s two years ahead of schedule as far as being a starter. So we bumped up Suglio because we know he has a lot of experience, he’s a really intelligent kid.”

Andrassy noted that the first two duals of the season are ones that he thinks his team should be able to win.

“I think there are matches where they are perfectly our third match, which is against Rider (University),” he said. “They’re ranked right near us in some of the polls; a few polls have them higher than us, a few polls have them right below us. We’re the same type of team. Then it’s going to come to matchups. We’re going to need some fifth-year seniors to come through.”

One of those fifth-year seniors includes 149-pounder Mike DePalma. A two-time NCAA qualifier, DePalma is taking a patient approach to the beginning of the season.

“I’m not even really looking into the dual meets yet,” he said. “I’m just looking into doing proper preparation for the dual meet. I just want to make sure that I can do everything right this early in the season so that I’m going to feel my best competing at a dual meet.”

As far as taking the next step in his career, DePalma said that’s a process he’s been working on for a while.

“It’s mostly mental stuff,” he said. “The training didn’t really need to change. The way I view things in situations, or handle situations, is what I needed to change in certain aspects.”

Another wrestler looking to make a leap in his career is sophomore Chance Driscoll, who Andrassy said is “probably the hardest working kid on the team” after the team’s wrestle-offs.

“I would like to think that’s true,” Driscoll said. “It’s definitely my goal to be one of the hardest working guys on the team. But there are a lot of guys who work real hard. What separates me I would say is just trying to bring that intensity every single day and not just two days out of the week or four days out of the week… If it’s lifting, conditioning, whatever it may be, I’m trying to push myself. I don’t pick and choose what workouts I’m trying to work hard at, and maybe take other ones off.”

Driscoll said his 5-2 performance at Clarion was another step in the right direction for his career.

“The year I redshirted, two years ago, I went 0-2 in Clarion and wasn’t even in the ballpark,” he said. “I was looking at those finals matches like, ‘how am I ever going to get on those guys’ level?’ I didn’t even know if it was going to happen. But to go 5-2 this past week tells me a lot of hard work over the summer paid off, and that I’ve been taking steps in the right direction. You don’t get to see progress every day in the room, but over the course of two years, it’s definitely added up.”

Andrassy said at this point it’s all about Driscoll getting experience on the mat.

“I think for him right now it’s just getting matches in and his confidence up, and understanding what we’re going to be asking of him on a regular basis,” Andrassy said. “He’s one of these guys that has got to learn as we go because he hasn’t had a lot of experience. He’s wrestled for a long time, but he only started for St. Ed’s for one year, now he’s starting for us… So we just want to get him as much experience as possible going into this year.”

Kent State will participate in the Eastern Michigan duals on Saturday.