Students defy the odds at The Reaping 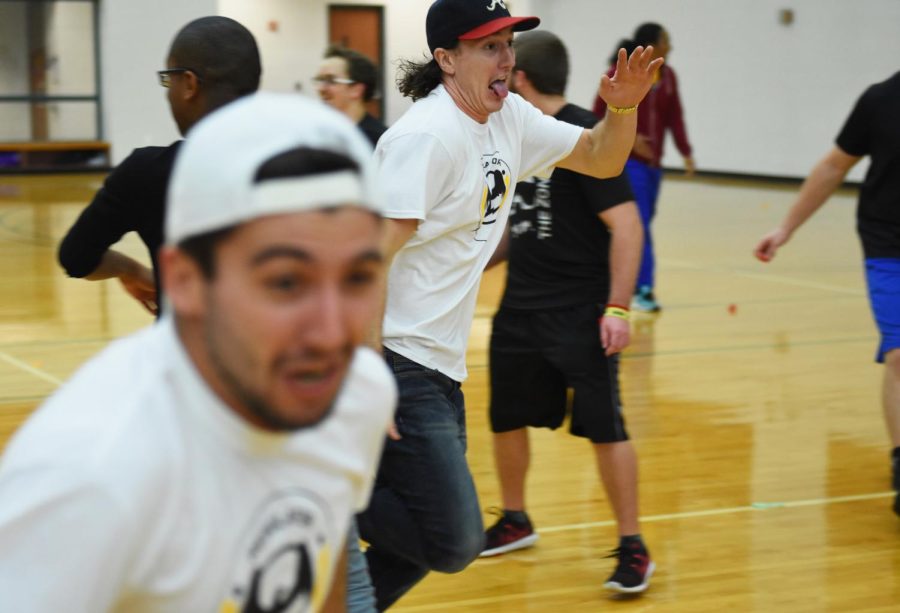 Sophomore Caleb Gannelli and other embers of the Kent State Hockey team run across the gym floor as participants in The Reaping attempt to stick colored tape to them on November 6, 2015.

Hundreds of students gathered Friday night for The Reaping, an interactive event hosted by the Department of Recreational Services as part of its Late Night Student Events program.

Inspired by the upcoming Hunger Games film, students split into eight different districts to fight regulators from eliminating their turf. Volunteers across campus aided the event.

“Whenever we do special events at the Student Recreational and Wellness Center… we always want them to be based on something that is really popular,” said Abby Millsaps, marketing coordinator for Recreational Services. “(We thought) basing something off the Hunger Games right when the movie is about to debut …would be right up our alley and Kent State students would really love it.”

In the game, each district was given a different colored roll of tape, which they used to ‘tag’ the white-masked regulators in order to gain points for their team. The district that placed the most amount of tape on the regulators won that round.

To make it more difficult, an occasional reaping made by the “Queen,” such as freezing districts and other restrictions, threw obstacles in the students’ way. Free pizza and custom T-shirts followed the two-hour program.

Students from organizations all across the university volunteered as regulators or other members of staff for the program. A surprise appearance from the men’s hockey team during the game highlighted the night.

“There is a thrill when you get one of the guys. It’s almost like winning the lottery,” said Kathleen Huber, a freshman fashion design major. “I really liked the mystery and surprise of it all.”

Despite resounding attendance, the event produced mixed signals across participants who compared The Reaping to last year’s Outlast the Outbreak, a similar event that involved students running away from zombies in both an indoor and outdoor playing field.

“It wasn’t very organized this year and not as exciting as last year,” said Brennan Cooper, a senior psychology major. “But…I liked how they made it more collaborative with students working together and whatnot.”

In case students missed The Reaping, they can look to participate in other events hosted by Recreational Services. As part of Student Affairs, the department hosts Late Night Student Events to provide on-campus entertainment for students.

“We are always putting the students first,” Millsaps said. “We want to positively affect student retention (at) Kent State. The idea is if there are awesome free programs like this going on the weekends, it’ll… motivate them to stay on campus… and go to class and ultimately graduate here.”

Rachel Duthie is a general assignment reporter for The Kent Stater. Contact her at [email protected]