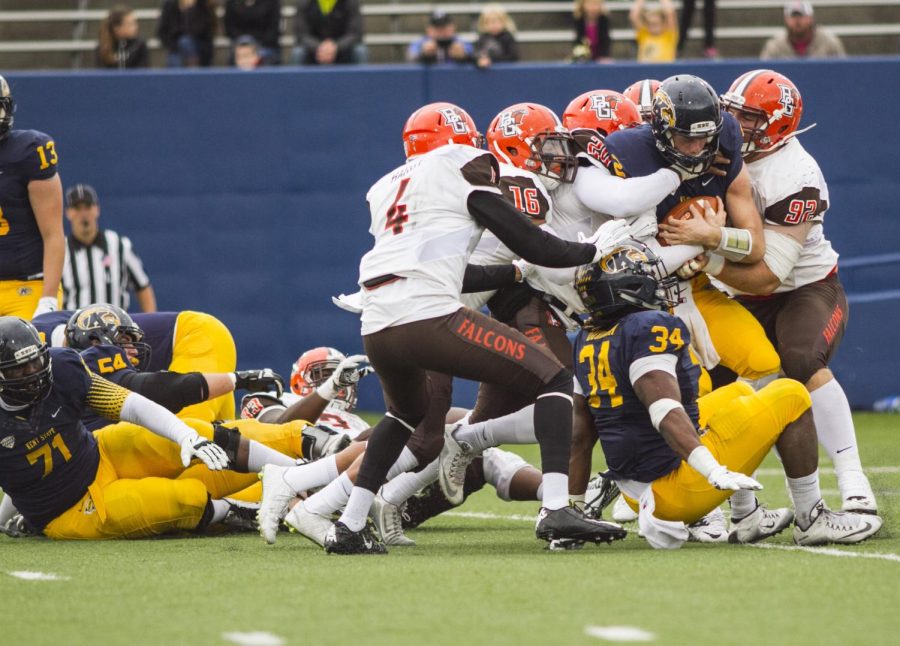 Quarterback George Bollas (#2), is sacked by the Bowling Green defense during the third quarter of the Kent State vs. Bowling Green football game on Oct. 24, 2015. The Golden Flashes lost 48-0.

Kent State will return to the field for the first time since its shut out loss to Bowling Green on Oct. 24.

The Flashes used the week off to clean up on offense, along with recover from nagging injuries that lingered from the first eight games of the season.

“It’s perfect,” said head coach Paul Haynes of the week off. “You’ve got guys like Nick Holley and Myles Washington who are out, but we have a lot of ankles and shoulders that are bruised up.”

The Flashes will play their first game in the month of November against the University at Buffalo (4-4, 2-2 Mid American Conference).

Buffalo is coming off back-to-back wins over MAC East opponents in Miami (OH) and Ohio.

The Bulls are lead by senior quarterback Joe Licata who is first in the MAC in touchdown passes with 29 on the season. Licata is coming off of a game against the Red Hawks where he completed 22 of 29 passes for 289 yards and two touchdowns.

This is the first time in two years that the two schools have played each other after last season game was canceled because of weather conditions.

“We are going to go in and look at it as a regular opponent we play in the MAC,” said sophomore cornerback Demetrius Monday. “We are just going to go in a prepare like we usually do.”

Stephen Means is a sports reporter for The Kent Stater. Contact him at [email protected]