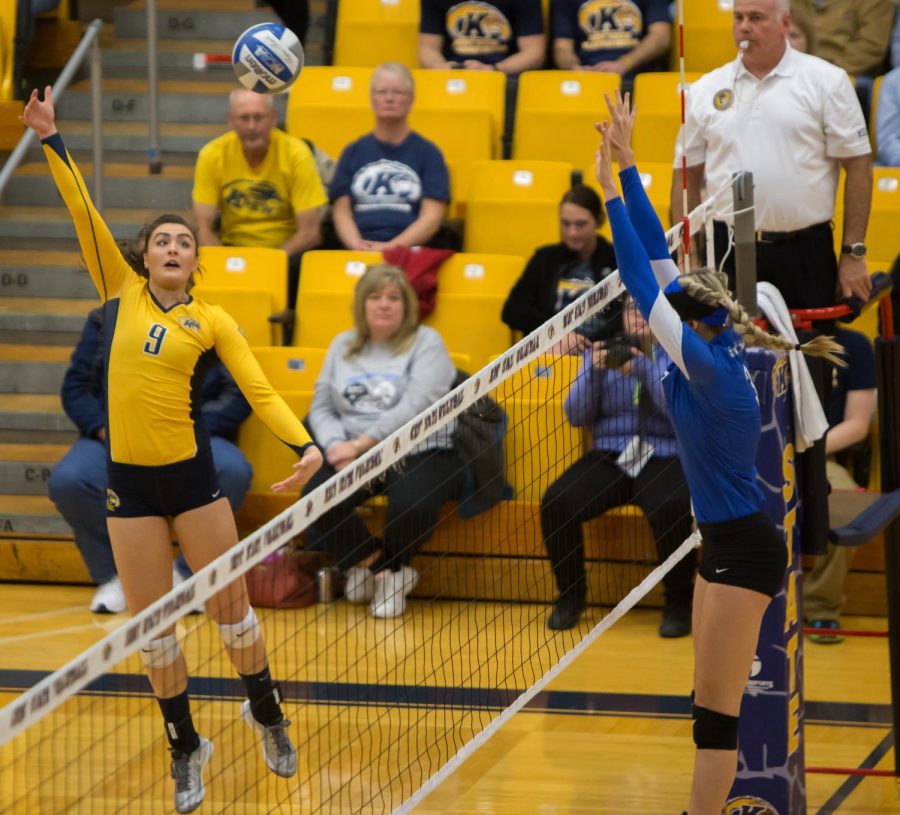 Freshman Lexi Mantas hits the ball during a game against the University at Buffalo on Saturday Nov. 14, 2015.

Kent State’s women’s volleyball team swept its last two opponents of the regular season this past weekend, to extend its winning streak to five games, and claim a share of the Mid-American Conference East Division Championship.

The Flashes, who finished the year with a record of 19-9, claimed victory over the University of Akron Friday night before hosting the University at Buffalo and defeating them Saturday afternoon.

After the win against the Bulls Saturday, the Flashes finished tied for first in the Mac Conference East Division, a feat never before achieved by Kent, with a record of 13-3, tied with Ohio University.

“This was the epitome of our season and our team today, a great team effort,” said coach Don Gromala after the game. “I thought we played really good floor defense. Our offense was really balanced as well.”

On Friday, the Flashes hosted Akron at the M.A.C. Center as the teams matched up for the second time this season.

Kent started fast and never looked back, posting a score of 25-13 to claim the first set before taking the second set by a similar score of 25-15. The Zips fought back in the third set, but their effort wasn’t enough, as Gromala’s team held off Akron to achieve the sweep in three sets after wining 25-19 and ending the game in just 76 minutes.

Both senior Kelly Hutchison and sophomore Kelsey Bittinger finished tied for a match-high with nine kills each.

Saturday’s action proved to be much of the same for the Flashes, as they hosted the University at Buffalo at the M.A.C. Center in Kent.

Kent found itself on the winning side of a 25-16 first set performance and looked to carry the momentum into the second set. After Buffalo scored the first three points, the Flashes offense, led by Bittinger and Kojic, fired back and eventually found itself with a 15-11 lead before taking the set by a score of 25-17.

The third set proved to be the most difficult of the night for Kent, as the two teams fought back-and-fourth until the Golden Flashes claimed the victory and the sweep, 25-23.

Hutchison and Bittinger once again tied for the match-high in kills with 13 each, while senior Bridget Wilhelm added 12.

Kojic and Geraghty each recorded game-highs in their respective stats with 41 total assists and 22 digs. Kojic added a key ace in the second set.

“We knew we were good the last two years and we had some big wins, but our focus has been on managing that high level of play not for just a set or a match, but for an entire season,” Gromala said. “We’ve really done that over the last 13 MAC matches.”

Kent state will begin the MAC Volleyball Championship next weekend as the number three seed in the tournament, which will take place in Athens, Ohio.

Jesse Runner is a sports reporter for The Kent Stater. Contact him at [email protected]