Volleyball rises to top of conference 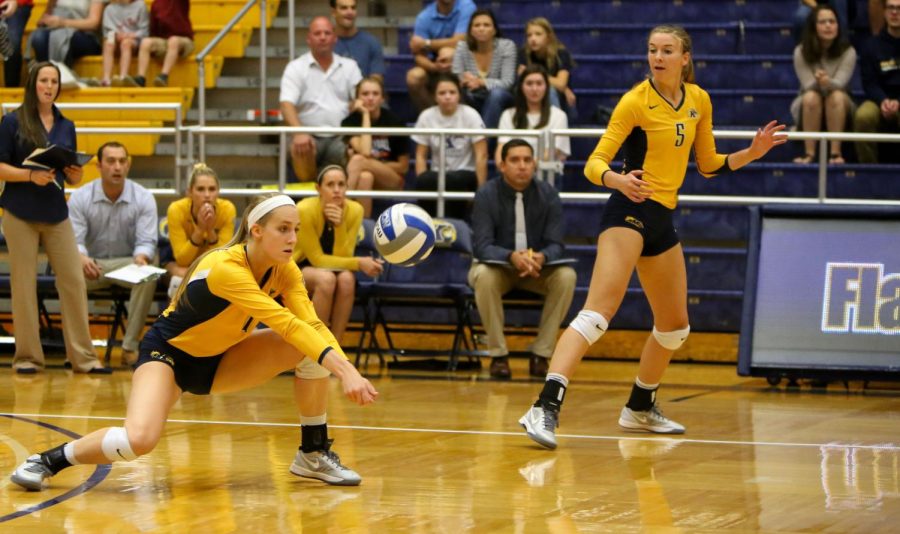 It’s a Monday afternoon practice and the best volleyball team in Kent State history is getting ready for its final weekend of the regular season.

Kent State coach Don Gromala smiles as he’s walking downstairs with his players. They spent some time watching film and are now stretching before an afternoon workout. Everybody seems relaxed, but confident–the most confident the team has ever been in Gromala’s four years at Kent State.

The Flashes (17-9, 11-3 MAC) have the opportunity to become the first team to reach 12 conference wins in program history. They’ll have two chances at setting the record: Rival Akron comes to the M.A.C. Center on Friday and the Flashes will play Buffalo the next day. Together, those teams have combined for 15 wins all season, still two shy of the Flashes’ 17 victories.

The Flashes enter the weekend tied with Ohio University for first place in the Mid-American Conference East Division and just one match out of first place overall. At this time last season, Gromala and his team wondered if they’d even make the conference tournament. This year, there is a chance they are the top overall seed.

The Flashes have beaten good teams in the past, but never so many, so often. They have never won the conference title or the regular season title, but this is their best chance yet. Since their home loss to Ohio at the beginning of October, they have won 10 of 11 matches, besting both the Bobcats and MAC West leader Northern Illinois on the road, plus last season’s conference champion Western Michigan.

Gromala said the big wins this year stem from the glimpses of unprecedented success in the past.

“Previous experience is the biggest factor leading to some results,” he said on Monday, recalling a lesson he learned in his sports psychology class at Iowa State.

He says this as if he’s reciting it directly from a textbook, but the reality is, he’s drawing it directly from memory. It’s etched along side the lessons he learned during the 12 years he spent as an assistant coach at three schools. He says it’s why the Flashes are now showing real potential to win the conference.

“It’s why it’s taken time for this program to get (to) where it’s at right now,” Gromala said. “It takes time to get some wins in some big moments.”

Of course, rebuilding a program requires more than just a tidbit shared in a lecture hall. Getting the Flashes to where they are today needed the right hire, a tireless recruitment process and convincing a locker room of 16 women to buy into a new culture.

Prior to his hire, the program consistently finished under .500 and rarely made the conference tournament. The Flashes and every other team in the MAC could not squirm out of Ohio University’s stranglehold on the conference: Since 2003, Ohio has earned eight conference titles, lost in another championship game and reached three semifinals.

Gromala knows the Bobcats: From 2004 to 2007, he served as a graduate assistant and assistant coach, joining then-head coach Geoff Carlston in taking the Bobcats to three straight undefeated seasons in the MAC. The Bobcats also went 63-1 in the conference while Gromala was with Ohio.

“Don was certainly a piece of that,” Carlston said.

Gromala followed Carlston to the Buckeyes in 2007 and spent three more seasons as an assistant with Carlston. In his final two years with Ohio State, the Buckeyes went to two NCAA Tournament Sweet 16 rounds. Then, in April 2012, the Flashes brought in Gromala.

The Flashes didn’t instantly start winning. They went 6-22 in his first season and won three games in the conference. A year later, the Flashes finished 12-18 overall. The only real highlight of Gromala’s first two years is the Flashes’ 3-1 victory over nationally ranked Ohio in 2012.

But over the span of the last two seasons, the Flashes have finished with winning records and earned their first conference tournament win with Gromala, all of which is primarily due to the young recruits he has brought in.

Picking up the right pieces

A number of the key players attributing to this season’s success come from Gromala’s second recruiting class. The Flashes signed sophomore setter Brittney Jakscht, who was ranked as one of the nation’s top 250 recruits, and then brought in sophomore outside hitter Kelsey Bittinger, also in the top 250 in that class.

Then came sophomore libero Challen Geraghty, who visited Kent State on a day that Bittinger, who had already signed, was there. Bittinger spent the trip talking to Geraghty about how much she loved Kent State and Geraghty expressed some uncertainty. She didn’t initially want to go so far from her home in Louisville, and at one point late in her high school career, wasn’t even sure if she wanted to play volleyball in college.

“I was just really scared…but I gave it a chance and I absolutely loved everything about it,” Geraghty said. “I really didn’t know anything about the program before. I just really liked the team and that’s all I really cared about.”

Geraghty, who set the record for most digs as a freshman last season, leads the team in digs this season and has already won three MAC East Defensive Player of the Week awards. Bittinger leads the team in kills with 371 and already has 34 matches with 10 or more kills. Both were a part of a top 100, nationally-ranked recruiting class. This year’s class features freshmen Amy Kober, Lexi Mantas and Sam Jones in the rankings. Gromala also brought in transfer junior setter Katarina Kojic, who already has 14 matches of 40 or more assists.

Gromala sells players on the philosophy of making every point difficult for the opponent. He also said he is “real” with players, telling them what his staff needs them to fix before they arrive on campus, and he sells them on the university itself by calling it the “complete collegiate experience.” He also said he had always been himself on recruiting trips, including an arsenal of corny jokes.

“(The players) know that relationships are important for us,” he said. “To achieve things you’ve never done before, you have to have a special connection and we try to build that with the recruits.”

“The recruiting process in general was stressful, so finding people you felt comfortable with was pretty comfortable,” Bittinger said. “When I came here (and met) the girls and the coaching staff, I felt like I fit right in with them.”

The seniors also feel the team’s connection: Senior middle blocker Bridget Wilhelm said that while they’re advising the underclassmen, their experience and maturity speaks for itself.

“The younger girls, we don’t even see as younger. They jumped right in,” Wilhelm said. “I think that’s a testament to how (our program) has grown.”

Wilhelm was not recruited by Gromala (she was recruited by Glen Conley, who led the Flashes from 2007 to 2011), but she has been around for his entire time with the team.

Wilhelm said there’s a special feeling this season. When the Flashes defeated Ohio in four sets last Thursday, it felt as if the win wasn’t a fluke.

“A couple years ago when we beat Ohio, we all went insane and it felt like the biggest upset ever,” Wilhelm said. “But the other night, it felt that we knew that we could. It didn’t feel as much of an upset for us. It felt like we were equals.”

Carlston said he has told Gromala he could see the team’s different mentality in Columbus and he sent Gromala a congratulations text.

“The last time in 2012 seemed like a bit of an anomaly, but this one, I felt like (the Flashes) were primed to beat them,” Carlston said.

Even now, Gromala and Carlston remain friends. Similar to how Gromala does not strictly talk volleyball with his players, both coaches talk more about their own personal lives. Both are now fathers and Carlston says their friendship is more mature than it used to be.

”I’ve known Don since 2000. You go through a lot together,” Carlston said. “(Now) we talk about what it’s like to have a kid spit up on you while watching film.”

Even games they have lost have made a difference, too. Bowling Green snapped a seven-match win streak this season in a five-set victory, but Gromala was proud of how the Flashes responded in their next match when they beat second-place Miami in straight sets at Oxford.

“It’s all about belief,” Gromala said. “The response from the Bowling Green match wasn’t ‘we lost.’ (We) came back and said, ‘Hey, that’s not going to affect me mentally,’ I think that was a huge part in the character change here.

“We have had a lot of great people who have been here who unfortunately won’t get to experience what these girls have this year, but they were all part of it. We took it step-by-step (and) didn’t try to force anything. It takes time to try to change systems, but it’s just the mentality. It’s changed little by little.”