Behind the scenes event planning with USG 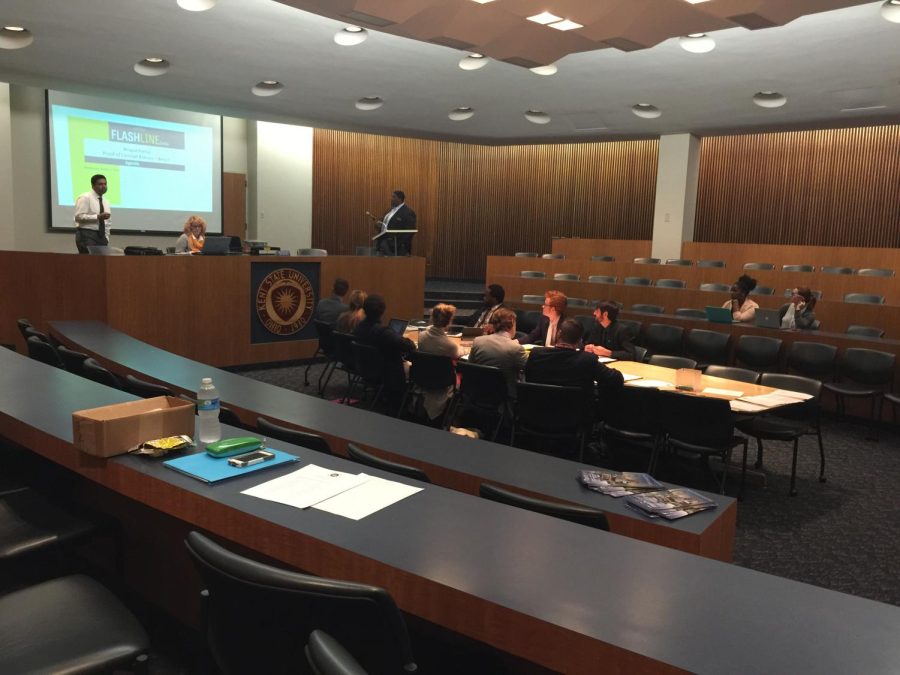 The Undergraduate Student Government (USG) outlined their process of organizing concerts and other student-engaging events with the promise of efficiency and satisfaction for students.

The USG Director of Programming Kevin Otubu said the main way the USG drafts a list of potential performers is by a submission tool on their website. Based on the most popular requests, Otubu and his colleagues begin to research the possibility of bringing in such musicians and comedians, with students being able to access the platform and submit the name of artists they would like to see performing at Kent State.

“Students do not realize that this is a very long process and there is a lot of things we need to take into consideration before bringing a performer to campus,” Otubu said. “Our objective is to organize events that the students are excited about, but we all have different taste in music and comedy.”

USG has a programming board that works intensely in order to plan, organize and host the events with more efficiency.

At the beginning of each year, any student taking 12 or more credit hours has the opportunity to apply for a position on the board, making it a more representative, fair process. The five members of the board, together with the director of programming, are then responsible for the rest of the decisions regarding the USG-organized concerts and shows.

“We narrow down our list based on three aspects: popularity, venue and price. The first and the last being the most important,” Otubu said. “Money and relevancy are essential, but it is also necessary to make sure that both the artists and our locations are available in the same date.”

The Memorial Athletic and Convocation Center (MACC) is the most used facility, but USG shares that space with the men’s and women’s basketball, volleyball, wrestling and gymnastics teams.

Before anything else, however, the USG has to analyze if having the performers is a financially viable option. The programming board has around $360,000 per year to work with, an amount that comes from part of the activity fee every Kent State student has to pay.

“The USG is funded by the students and that is why we focus on pleasing as many of them as possible,” Otubu said. “The amount we get might seem like a lot, but when you start looking at performers’ prices you realize it is not.”

Because of the high prices requested by the artists, USG has to pay for the acts by selling tickets.

“We try to set the price as low as possible and as long as we are able to break even, we are satisfied,” he said. “The highest price we’ve ever had was for Amy Schumer’s upcoming performance and that show quickly sold out.”

The two main reasons that force USG to charge for events are the high cost of production and FlashFest. According to data provided by Otubu, the vast majority of last year’s funds went to either the event set up (building the stage, stereo system and paying staff) or the annual spring festival that is free for Kent State students.

“We believe in the idea of having an event that is free of charge and that happens to be FlashFest, our main festival,” Otubu said. “If we had more funds, we would obviously not need to sell tickets.”

Although having a larger amount of money available is a possibility, there are other areas that need just as much funds. USG directs a portion of its money for allocations, which means student organizations can request money in order to host their own events and bring other performers.

Katie Goldring, assistant director of student activities with the Center for Student Involvement (CSI), works closely with the allocations department of the USG and believes allocations are very important to have for student organizations.

“We want every club and student organization to be able to organize an activity if there is interest,” she said. “That does take away a percentage of the USG funds, but the distribution makes it for a more inclusive and fair financial situation.”

Students have mixed feelings regarding USG’s efficiency when selecting acts and hosting events. While some are satisfied with the wide variety of genres and quality of the performers, others believe the funds could be better managed and spent.

“I like the artists they bring to a certain extent, but that’s probably because of my genre preferences,” junior hospitality management major Sanja Milic said. “The one thing (I) strongly dislike is spending a lot of money with comedians. I would rather have the USG save money in order to bring bigger musicians for FlashFest.”

On the other side, sophomore integrated mathematics major Nick Adzema enjoys the annual fall stand-up comedy show, but agrees with Milic regarding FlashFest.

“I believe it is a great idea to bring a comedian the week before finals, (as) it helps us relax before a stressful few days of important exams,” he said. “FlashFest, however, for being the major festival of the year, should probably have more well-known artists.”

Sophomore nursing major Morgan Bing said she has satisfaction with both the selection of performers and variety of genres.

“Every event I have attended was a lot of fun and they are always popular musicians or comedians,” she said. “I love that they try to bring a wide range of artists (because) it shows the USG cares about making everyone happy.”

The next opportunity for students to enjoy one of USG’s events is Dec. 6, when Amy Schumer will perform her stand-up comedy routine at the MACC, but tickets are already sold out.

Bruno Beidacki is an activities reporter for The Kent Stater. Contact him at [email protected]