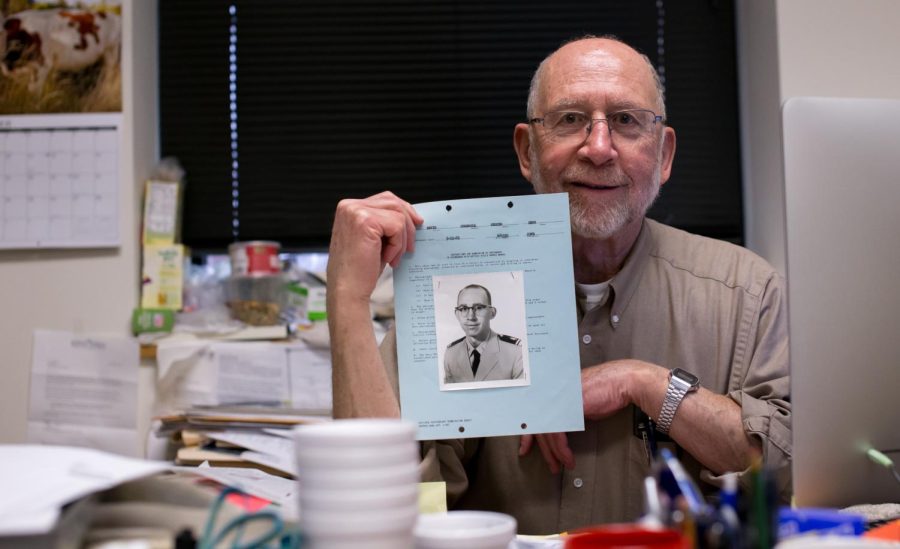 Professor David Riccio holds a photo of himself taken in 1963 two years prior before starting his tenure at Kent State on Tuesday Nov. 10, 2015.

At Kent State, most professors cannot say what it’s like to teach for more than 50 years. The exception to this statement is Kent State’s longest-teaching professor David Riccio.

This year is the psychology professor’s 51st year at Kent State. He began his career at the university as an assistant professor in 1965 and has stayed because of his attachment to the psychology department.

“It was at that time the department was very productive but also very collegial and those are two things that very often do not go together,” Riccio said. “I figured I’d try it (at Kent State) for a few years because in those days, there were a lot of jobs available. It became clear this is a good place to work. Why leave when there’s a place you can get work done and enjoy your colleagues?”

His initial interest in psychology began as an undergraduate at Middlebury College in Vermont.

“It was probably the first good grade I got on a test,” Riccio said. “I got encouraged by the faculty there, so I’m sure that had a big influence on me.”

After graduating from Middlebury in 1959, Riccio went on to pursue a PhD. in psychology and became a research associate at Princeton University in 1962.

He eventually worked for the United States Army later that year and transferred to the US Navy to be a research psychologist in 1963. These positions taught Riccio an important lesson that he incorporates in his classroom today.

“I did learn one thing in the army: which is not always easy to follow, but the acronym was K.I.S.S. Keep it simple, stupid. So I’ve tried to remember that,” he said.

Riccio’s interest in research was one factor that convinced him to later become a professor.

“I liked the nature of academia. I liked the idea of being able to exchange ideas, to talk about ideas, to do research and that’s what you do in a university,” he said. “I got bitten by the research bug when I was a graduate student because that’s a lot of what you do.”

Since his beginnings as an assistant professor at Kent State, Riccio’s teaching methods have evolved along with the development of technology. The content, though, has stayed the same.

“We used to use blackboard, then we used white board, then I used to use overhead slides and now I use PowerPoint. Other than that, same old,” he said.

Throughout his time at Kent State, Riccio has been able to find a mentor who has influenced his own teaching style.

“I suppose my mentor is a role model for me in some ways. I learned from him how to think a little bit about research,” Riccio said. “I think one of the things I really appreciated, and I try to do this with my own students, he would support broad (ideas), as long as it fell somewhere within his domain. You didn’t have to be a clone of what he was doing. (Students) aren’t just clones that continue on. They might for a while until they get their own stuff together, but one of the things you’re suppose to learn as a graduate student or a doctoral student is how to do research.”

Students taking these classes are able to tell that their professor has extensive experience in the field.

“He’s a knowledgeable professor… you definitely have to read outside of class, but if you do that you’ll learn quite a bit,” said Olivia Smith, a sophomore speech pathology and audiology major.

This experience and knowledge his students notice can also be seen through his work that has been published in approximately 200 professional publications.

“It is satisfying to have publications and peer reviewed journals that go through scrutiny and all of that,” he said.

Aside from changes in the field of psychology that he has researched, one change Riccio has noticed throughout the past 50 years at Kent State is the intellectual curiosity of students.

“They have changed in ways that I think are somewhat unfortunate,” Riccio said. “The state subsidy for students has substantially declined…that means students or their parents… end up working a lot. This distracts from their time to study if they have to work 20 to 30 hours a week… That’s been an unfortunate consequence of the state’s lack of support for higher education.”

Riccio’s Kent State office is today full of eclectic treasures from the past 50 years. One of these treasures includes many calendars, pictures, figurines and even a cardboard cutout of cows.

“Vermont has a lot of them,” Riccio said. “It’s actually just a joke, but they’re not very bright. They’re not very smart creatures, they’re not like dogs. They’re very peaceful for the most part, so they’re kind of sweet and easy going.”

Riccio’s reputation as an experienced professor, contributions to the psychology community and unique preference in office décor have helped him gain notoriety throughout his time at Kent State. As far as the future, however, he is not totally sure what’s in store for him.

“As long as I enjoy what I’m doing and I stay healthy…. I’ll continue on, but there probably is a point where I decide that I… don’t have the energy…” Riccio said. “It’s a little hard to say where I’ll be in five years.”

Megan Hermensky is the faculty and administration reporter for The Kent Stater. Contact her at [email protected]