Here’s the ticket: an analysis of Parking Services 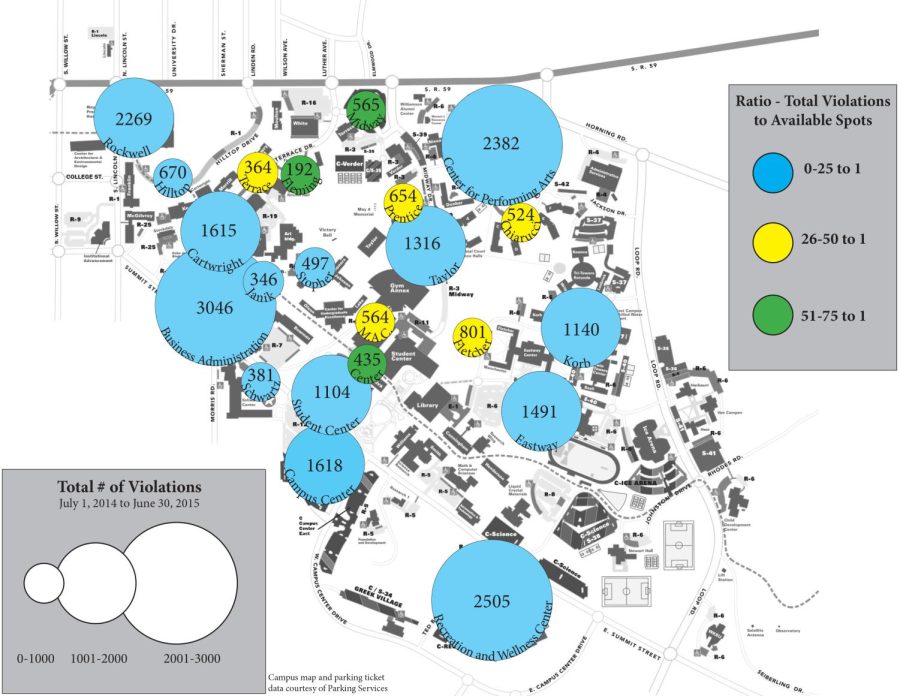 Each semester, a number of students at Kent State’s main campus have an encounter with a neon-green wearing, ticket-machine toting parking services worker. Yellow tickets placed on vehicle windows are a sure sign of a bad day, but they’re also sign of a designated violation of Parking Service’s rules.

From July 2014 to June 2015, Parking Services issued 46,351 tickets. Divided between roughly 70 lots and more than 11,000 spaces, the university’s parking department generates more than $2 million in revenue each year.

As an auxiliary unit of the university, Parking Services is completely self-sustaining, generating its own budget from revenue collected by parking permit sales, visitor and meter fees, violation fees and special event parking sales. It does not receive any funding from the university or the state, according to its website.

Larry Emling, manager of Parking Services, said the goal of the department is to put students first. Every year is a balance of getting students and staff a parking spot they want, expanding lots or losing spaces and enforcing compliance with existing lots, he said.

“We try to be pretty understanding and pretty flexible with people. We’re not out just to be the bad guy,” Emling said.

Despite the stigma on campus that Parking Services workers issue tickets out of hatred in their hearts, Emling said they don’t work on a quota system.

“We tell people, if you’re working for four hours, we do expect to see tickets. If you don’t write any, they’re out there. It’s not anything like ‘write 10 an hour.’ We know the daily patterns, we know what it should be,” he said. “Right now we’re seeing … between 200-300 a day with 250 as an average. That’s about 17 an hour. It sounds like a high number until you break it down.

“For every one you get, there’s probably someone else that’s violating also,” Emling said. “We tell people all the time: We ticket to get compliance.”

According to its website, the annual operating budget for Parking Services is approximately $4 million. Emling said that figure for this year is slightly more, at $4.4 million, because it has built in a buffer of approximately $3 million for construction projects.

“Any money left over (after operating expenses) rolls over into a capital account that is earmarked for parking and only used for parking lot maintenance, improvements, new lots, renovations — anything that needs to be done in a parking lot, (the university) is going to look to use to fund that,” he said.

Kent State’s recent renovation of the lot outside Bowman and Satterfield halls cost about $1.1 million thus far, and has been covered completely through that account. In its entirety, the project is expected to cost roughly $4 million. But the department only gained roughly 20 spots.

Emling said that with the Summit Street Improvement Project underway, he expects big changes for the university. After Campus Center Drive is rerouted and the Summit Street roundabout installed, Parking Services will lose roughly 200 spots.

“We’ve been meeting with the university architect’s office for the last year and a half to talk about what that it means, what are the options, and where we can make up these spaces,” he said. “Five here and five there isn’t meaningful. It’s got to be impactful.”

With the construction of the Institutional Advancement building on the corner of Summit and Lincoln Streets, he said he hopes to pick up about 125 spots. But those are just redirected staff members from the existing lots. Emling said when a new lot is created, permit holders are simply shuffled to other locations.

“They’re vacating space on campus. This isn’t new staff. This is existing staff which means those 100 or so people are already parking somewhere else. They’re going to have a brand new lot which will open up those other spaces. How those will be used is yet to be determined. But we might be able take advantage of those for students.”

He said they do have plans for expanded parking options, but he could not comment because they have yet to be finalized with the university. Emling could not say whether those plans included expanding current lots or creating new spaces entirely, but said it will most likely be a mix of both.

“We recognize the value in these spaces and the demand is so high right now with enrollment where it’s at that we don’t want to give up anything,” he said. “But if we can make those up and maybe gain some, then maybe we can turn this into a win-win situation for everybody.”

Emling said Parking Services is also looking into expanding spaces near the new College of Architecture and Environmental Design building. It’s a small space to work in, he said, but like the Taylor Hall and Advancement spaces, the students and staff will simply be shuffled. Spots vacated will be repurposed for other permit holders.

Matthew Merchant is a senior reporter for The Kent Stater. Contact him at [email protected]