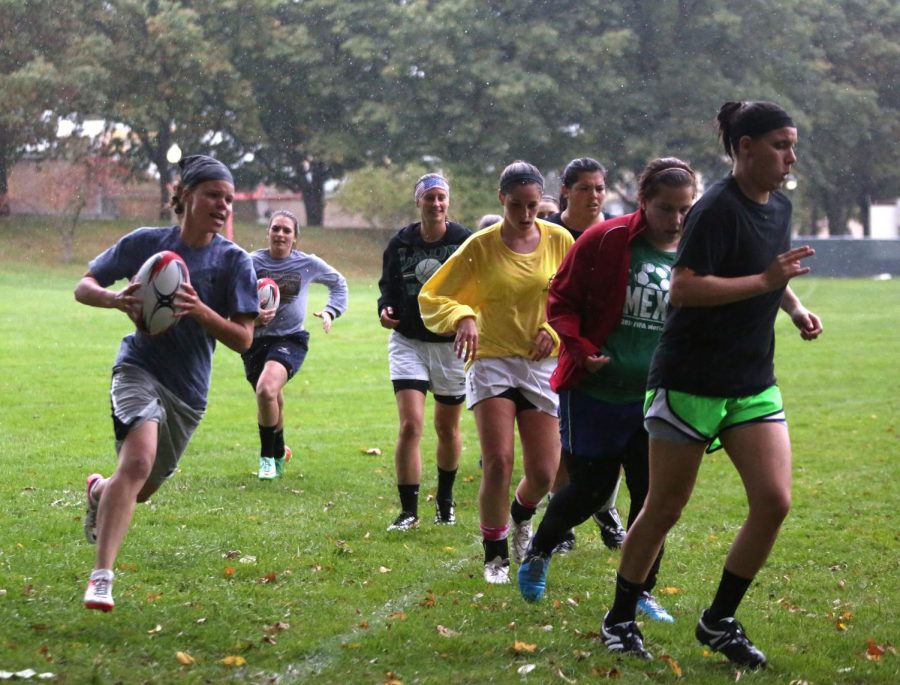 The Kent State Women's Rugby Club run around the field outside of Taylor Hall to warm up in the rain on October 7, 2014.

During this time the team had to learn some new phases of rugby and touch up the parts where they have been messy in, said coach Jeff Horton.

Horton said getting more girls to possess the ball before contact as the offense moves through multiple lines of defense is the biggest new addition to the game plan.

Back line players, like senior Michaela Williams, knows how important it is to get multiple lines of offense attacking the defense.

“As a back line, we know we can usually break through the opponent’s first line of defense, but after that it’s usually a mess,” Williams said. “So we’re going to use our forwards to incorporate a second line of offense behind the back line.”

Williams said these forwards will be like reinforcements to the backline who will allow the team to move the ball forward more easily, and less movement of the ball laterally.

Last week’s bye also gave the team an excellent opportunity to tighten up some aspects of its defense that are not meeting the team’s expectations thus far, said Horton.

“Our discipline on defense was our primary focus,” Horton said. “As odd as it sounds, we have a tendency to be over-aggressive when it comes to tackling. That style of play is extremely high risk and high reward, and we are looking to be more consistent on that side of the ball.”

“CMU is a much improved club from last fall, and we need to go into the match focused and ready to execute our game plan flawlessly,” Horton said. “CMU won its latest conference match against Western Michigan by a score of 97-0.”

Horton also said that the team will rest some of its normal starters this weekend, to ensure they play at the highest level possible in the next match.

“Although we don’t have any major injuries to report, we will be sitting some of our women to get them back to 100 percent before our road trip to Western Michigan,” Horton said. “Most notably is Stephani Taccola, our most experienced prop (similar to a defensive lineman in American football).”

Horton said rookie Katie White will be taking her place, and rookie Emi Dever will also be getting a start.

Kyle Samec is a sports reporter for The Kent Stater. Contact him at [email protected]