Boos and booze: Actions to keep Kent safe for Halloween 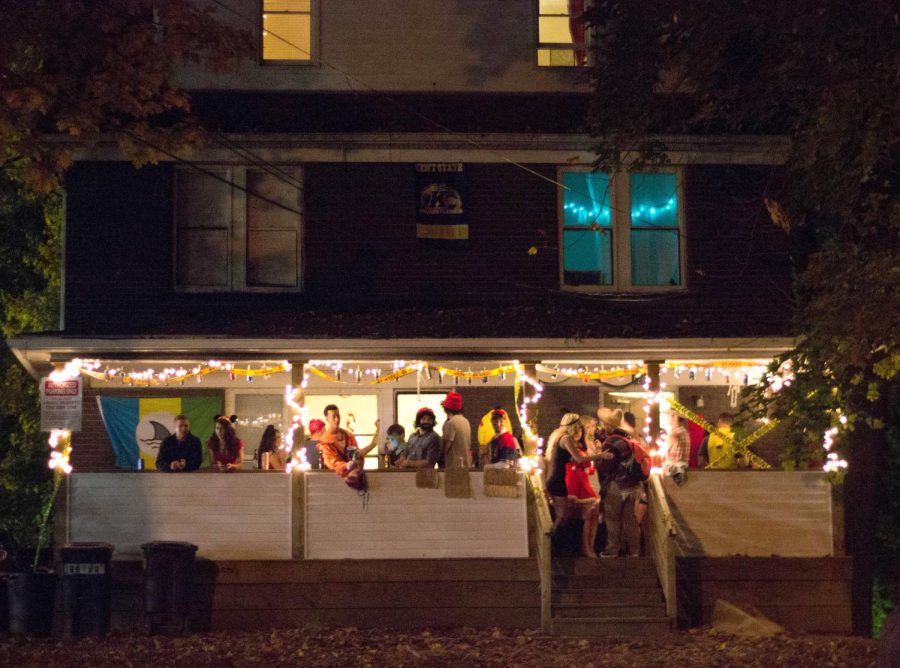 Students party at a house on University St. during Kent Halloween on Oct. 25, 2014.

As Halloween quickly approaches, students and members of the Kent State community are prepping themselves for Saturday’s festivities. From storming downtown in costumes to purchasing huge quantities of alcohol, Kent Halloween has evolved into a major undertaking for the city.

Kent Halloween brings thousands of people to Downtown Kent each year, many of whom aren’t Kent State students.

Along with the mass amount of people participating in Halloween activities, mass amounts of alcohol will be consumed. Whether it be at a bar or a house party, binge drinking has become a staple to this holiday.

However, possession of alcohol at Kent State is prohibited for the majority of residence halls regardless of the resident or visitor’s age, as well as on campus.

Intoxicated students returning to their dorms are also subject to warning or disciplinary action if they become disruptive. Despite this rule, drinking still makes its way on campus.

When drinking on campus becomes an issue for students, they are commonly sent to the Office of Student Conduct located in Beall Hall. Todd Kamenash, assistant dean of students and director of student conduct, oversees the process of student disciplinary meetings, many of which stem from alcohol-related offenses.

“Welcome Weekend, homecoming, and Halloween are the primary times when we recognize that we are going to get more reports,” Kamenash said.

Kamenash adds that reports come from both the City of Kent’s Police and Kent State University Police.

If a student would be caught consuming too many brews on Halloween, he or she has the potential to be sent to the Office of Student Conduct, where a number of factors come into play when determining a punishment.

Kamenash outlines that offenses can be grouped as low-level or high-level. Low-level meaning that the person breaking a rule has not committed prior offenses or didn’t put anyone else in harm’s way.

“Last year roughly 55 to 60 percent of our cases were lower level,” Kamenash said.

Following a meeting with a faculty or staff member, where students are asked questions about themselves and their responsibility towards their alleged action, student conduct determines what sanctions are best for the student.

“Sanctions are not pre-ordained, they are specific to the person. If they tell us something about themselves, we can use that to help guide them to not breaking the rule in the future,” Kamenash said.

On the other side of the event is the preparation leading up to Halloween.

“We’re bringing all of our officers in for Halloween, many of us will be working 12 hour shifts,” Knoles said.

In addition, Knoles notes that the City of Kent Police has asked other police agencies to help on Halloween, such as Brimfield Township Police and Portage County Sheriff Department.

Knoles also describes the process for those caught with open containers on Halloween. If the person is under 21, they would be summoned in lieu of arrest and sent to Student Conduct.

While drinking is an issue on any college campus, Knoles notes how much education about alcohol awareness is done on campus as a positive.

“I’ve done about 20 presentations in the month of October alone about alcohol awareness, party safety and Halloween safety,” Knoles said.

Knoles also said that Kamenash, a Kent State officer, a Kent Police Officer, and other members of the city go house to house on the streets surrounding campus and talk to them about party safety.

As for those going out on Halloween, Knoles notes to stay safe and remember the Good Samaritan Provision, which encourages students to contact emergency services if someone has consumed a dangerous amount of alcohol and promises to not issue a summon for underage consumption.

Shane Beneke is the health reporter for The Kent Stater. Contact him at [email protected]