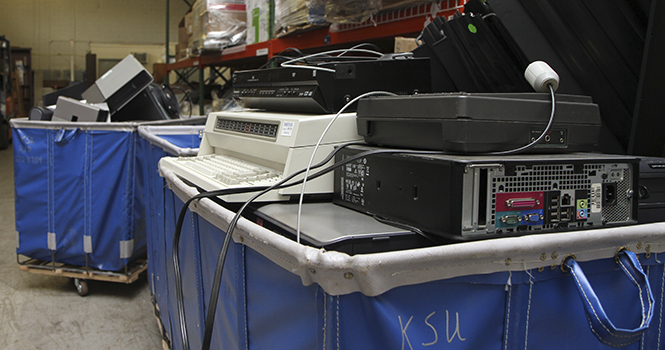 From promotional videos to extra content on its website, the Kent State sustainability department works to inform students on how recycling on campus can be a difficult task.

For 10 months of the year, Kent State’s recycling goes mostly uncounted, as yearly totals for the college’s single stream recycling program is taken only from a two-month sample period each year.

“The only time we get numbers is during Recyclemania, and that is where we get our rates,” said Leah Graham, Kent State’s outreach and recycling coordinator.

According to records obtained by The Kent Stater in 2014, Kent State recycled an average of 33,000 pounds per week, resulting in 263,354 total pounds during Recyclemania.

These numbers are reached by a volume-to-weight estimate done by Portage County and Republic Services.

The volume is estimated based upon how full each individual container is, and then the sustainability department receives a sheet from the company with these numbers. A mathematical conversion is then done, giving the estimated weight of recycled material.

“It makes sense that records are kept during Recyclemania because that’s when there’s a focus on seeing how much people recycle on campus,” said Ruthann Antolik, president of Kent State’s Biology Club.

Recyclemania is an eight-week recycling and trash collecting competition for colleges in the United States and Canada. Kent State is one of 18 Ohio schools that usually competes.

Graham mentioned that last year, an environmental health and safety class helped conduct a waste characterization study, which assisted in allowing for the sustainability department to improve its outreach programs. However, rates are only monitored during Recyclemania.

Livia Handel, a sophomore zoology major and biology club member, said that she isn’t sure if not keeping track of recycling totals is necessarily a problem, but feels it should be done. She also added that the data could potentially be skewed if it’s only kept during Recyclemania.

“During this time, since it is advertised more, students are most likely going to recycle more than (they) usually do,” Handel said. “I think this is concerning because it could make the recycling statistics seem better overall than they actually are.”

Kent State started its university-wide recycling program in 1990. While it has taken different forms over the years, Kent State made the switch to single stream recycling in 2013.

This means that all recyclable materials can be placed into one bin, without having to be separated out. The bins are taken out by either the custodial or grounds staff on campus and then placed into containers for pickup.

These bins are picked up by Portage County Solid Waste Management and taken to the Waste Management Materials Recovery Facility (MRF) in Akron. Once at the plant, the recycling is sorted with a series of conveyor belts that separate products by gravity. After the recycling is sorted, it gets compacted and sent back to manufacturers to make new products.

On campus, trash and recycling also go in specific color-coded bags. Clear bags and blue bags are for recycling, while black is reserved for trash, said Graham.

Students in the residence halls have personal recycling containers in their rooms that are later emptied into larger lined bins. Some choose to bag up their recycling and their trash, which means the items can be sent to the wrong place if students put the collectibles in the wrong color bag.

“At the material recovery facility, if recyclables are in a black bag, it’s automatically taken out and that is sent to the landfill,” Graham said.

The sustainability department hopes to improve awareness of recycling in later months by revamping their current recycling posters and adding trash posters to them.

“Something we might be doing with a class is a video of where each of our recycling streams go,” Graham said.

These initiatives may help with a perceived barrier that was found in a Ph.D student’s survey of recycling attitudes and behaviors on campus. Though a very small amount, some students don’t believe that the recycling actually gets recycled, said Graham.

“If students were informed about how the recycling process has an effect on them personally, they would probably be more likely to recycle,” Handel said.

Olivia Minnier is an enterprise reporter for the Kent Stater. Contact her at [email protected]