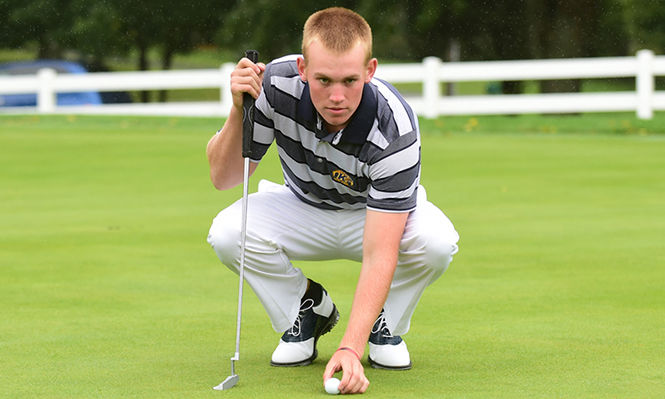 The men’s golf team followed up a second round comeback on Oct. 5 to win the team title at the Cleveland State Invitational on Tuesday with a team score of 17-under-par.

“It was really nice to watch this really young group and how they responded,” said coach Herb Page. “We got behind early, we were in eighth place after the first round.  They kind of just kept their chin up and kept moving forward and played some phenomenal golf.”

The Flashes saw four of its five team players place in the top 10 in individual scoring.

“There’s such a tradition of winning at this program and these young guys are just experiencing it,” Page said. “So, I hope it’s a break through for them.”

Sophomores Chase Johnson and Ian Holt both came within two strokes of finishing first place with a overall score of 6-under-par and tied for second place.  Johnson ended his final round with a 3-under 69 score. Holt finished third round play with a 4-under 68 performance.

“Well, they were thrown into the mix-up last year as freshman, kind of playing the one, two spots,” Page said. “Their expectations when they got here were very high and now their scores are matching. It’s just great golf.”

Sophomore Spencer Dobbs and freshman Gisli Sveinbergsson both ended their third round tied for seventh place at 1-under-par. Dobbs shot a 2-under 70 score at the end of the third round, while Sveinbergsson ended with a 3-under 69 score.

Out of the other Flashes who were only playing as individuals, junior Tyler McHugh ended his third round tied for 14th place with a 1-under 71 score to end the tournament at 2-over-par.  Senior Sebastian Bendsen finished his round with a 1-under 71 score and ended tied for 41st place at 9-over-par. Junior Chase Parker finished the third round tied for 54th place at 14-over-par with a 9-over 81 score on the day.

The men’s team comes home and turns right back around to leave for Tennessee to start play on Oct. 9.

“The field of teams will be much, much tougher, a lot of top 25 teams,” Page said. “I hope we can take this confidence and good play into this coming weekend.”