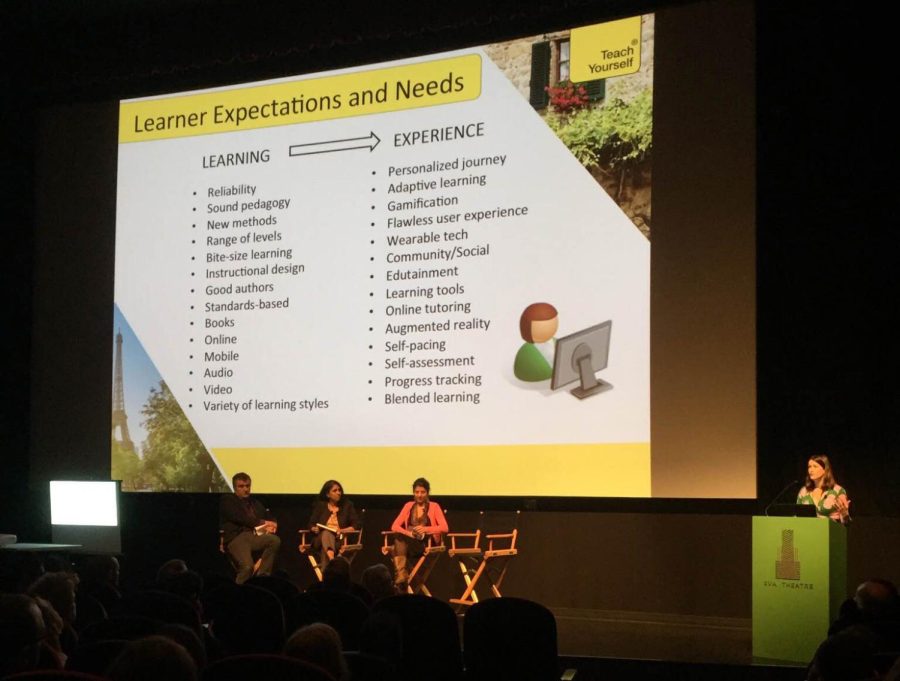 A speaker at the Polyglot conference in New York City. This years conference gathered around 400 people from 30 different countries

Kent State students enjoyed multilingual appreciation in the Polyglot Conference, an annual event that aims to celebrate those that can speak multiple languages, in New York City this past Saturday and Sunday.

Originally held in Budapest, Hungary, in 2013 and the second held last year in Novi Sad, Serbia, the conference aims to help polyglots communicate with others and share experiences with each other. This year’s conference gathered around 400 polyglots from over 30 countries.

Richard Simcott, who has studied over 40 languages and is one of the original founders of the Polyglot Conference, emphasized the importance of attending the event.

“Being a polyglot is an amazing skill,” he said. “The conference was created so people would have somewhere to debate about, practice and even learn a few new languages.”

With the presence of professors, researchers and enthusiasts, conference organizer Ellen Jovin celebrated the attendance of college students.

“These young polyglots are the future of language learning,” she said. “They are the ones responsible for the potential growth of multilinguists around the world.”

Attendee Daniel Pieretti, a Kent State senior double majoring in speech pathology and psychology, took his fluency in six languages to the conference. He said he was very impressed by what the event had to offer.

“I met fascinating people that spoke a bunch of different languages and was able to practice the ones I speak,” he said. “It was a memorable weekend and I will do everything I can to attend the conference again next year.”

Pieretti said it was an incredible opportunity for him to interact with his linguistic idols at the conference, such as speakers Benny Lewis and Barry Farber. Lewis is the author of “Fluent in Three Months”, a popular book and blog between the language-learning community and Barry Farber, fluent in 25 languages, is a radio host for CRN Digital Talk Radio.

According to its website, polyglotconference.com, Thessaloniki, Greece, will host the Polyglot Conference in 2016.

Timothy Doner, a Harvard sophomore majoring in linguistics, is a famous young polyglot who spoke on Indo-European languages and how connected they are. He said he is already looking forward to attending the 2016 Polyglot Conference.

“I speak seven languages fluently and have studied around 20,” he said. “My story has been told by The New York Times, BBC, CNN and Reuters, but nothing compares to being invited to speak at the Polyglot Conference”.

Leticia Andretta, a Kent State freshman journalism major, was surprised at the quality of the speech of such a young speaker like Doner.

“At first, I thought he was a doctorate student (because) he was just so good at engaging with the audience,” she said. “(He was good at) turning a complicated topic into an interesting one.”

A trip to next year’s conference in Greece is under discussion with the Kent students who attended this year’s event.

“If the opportunity to go to Thessaloniki shows up, we will do our best to go,” Pieretti said. “We are all passionate about language-learning and cultural diversity, so I cannot think of a better trip.”

Bruno Beidacki is the activities reporter for The Kent Stater. Contact him at [email protected]