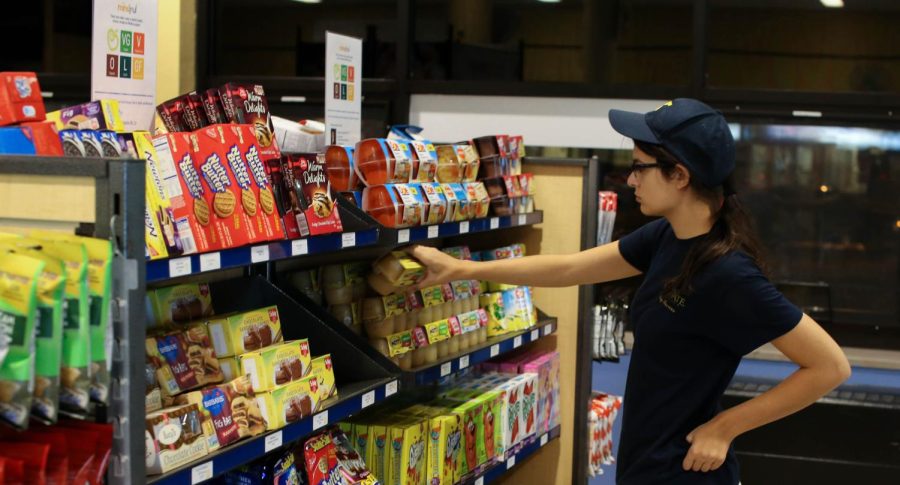 Dining Services director Richard Roldan said the changes were made to Munchies to inspire newer and healthier trends to eating on campus, all based on student feedback.

“There was a big push from feedback we got from surveys that there just (weren’t) a lot of healthy options,” Roldan said. “…How (could) we make our food better? Fresher is obviously better. It’s better for you.”

In response to these student-survey-based changes, Sabrina Simms, a student manager of Munchies and senior integrative studies major, said some of the changes weren’t needed, such as the new menu the workers had to learn.

She said the store feels more organized, but said that there are less shelving units for product. Along with the new sign, Simms said that the broken coolers were replaced as well.

“I think a part of it was because we had a change in management,” Simms said. “A lot of us have been pushing for changes… for a while. We’ve wanted a new sign for a while.”

She said that the menu changes resulted in more involved activities for preparing food, such as making sauces by scratch, slicing cheese by hand —no longer using pre-sliced cheese as they did before — and actually baking foods like chicken and bacon, rather than microwaving them.

“We have a bigger selection of vegetables now that aren’t just pickled,” Simms said. “I think (the store) is on the healthier side.”

Mike Coey, a student employee and a junior digital media production major, said the changes were beneficial to the store as a whole. However, he said the menu received a questionable change, such as removing the option for completely customized sandwich orders.

“I don’t know that taking out the customization was the right move,” Coey said. “To the people who have been to Munchies in the past, the changes will be a bit much and they will most likely be disappointed.”

These changes came over the course of the summer. The student workers said they weren’t told until as late as the first day.

“Because of the nature of our business, students don’t start back until move-in week,” Roldan said. “Typically, that’s when they’re going to find out there are any changes and any training happens then.”

Simms said that she found out about everything, from the menu to policy changes, the first day she returned to school. There was no memo of any kind distributed to returning employees.

“(Preparing the employees) could have been handled better,” Simms said. “It could be worse, though. The store looks great.”

Coey said he found out that he had to be retrained on the first day of classes by his superiors to prepare food on the new menu. He was then responsible for imparting the knowledge he learned to the newer employees.

“The biggest thing that disappointed me was that they didn’t have a seminar nor trained us on how to make (items on) the new menu,” Coey said. “It was unfair to the people on the prep line. We had to learn everything all over again. It was a bit unfair, but there’s not much you can do about it at this point.”

Coey said it will be a dedicated group effort to get everything standardized in the face of the new changes.

The renovations were made to address problems the student workers held when it came to the store, but brought with it new ways for the students to perform their same jobs.

Roldan said the staff and managers knew about the changes over the summer and were prepared to teach the new employees about the policy changes.

Jake Ruffo, a new student employee and a junior journalism major, said that the changes to customization were odd to him, especially since he had been eating at Munchies for two years now.

“It’s weird that you can’t make your own (sandwiches) anymore, and that you have to get some of (them) pre-made,” Ruffo said. “I don’t see a point in it.”

He said his hiring manager, James Maselli, told Ruffo that the changes were a big surprise for him too. Despite Ruffo saying this, Maselli said he couldn’t comment on any questions involving Munchies without Roldan’s consent.

Roldan said Munchies is managed by Sodexo USA, who also owns the restaurants Slice of Life and Wholly Habaneros, both located in the Hub.

Jacob Runnels is a assigning editor for The Kent Stater. Contact him at [email protected]