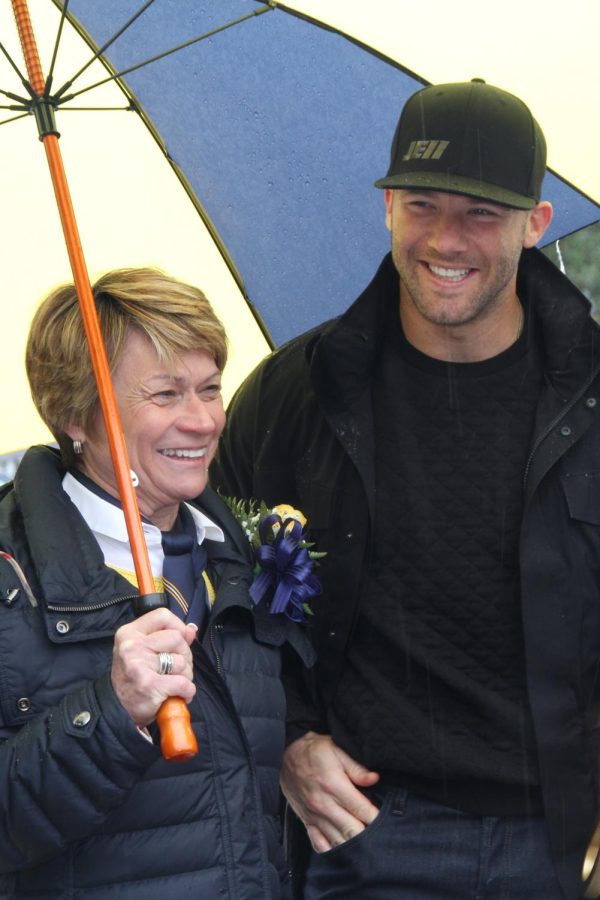 In an interview Tuesday, Edelman said he hadn’t talked to the Kent State football team because of his busy schedule.

However, just a night before the Flashes defeated Miami 20-14 and he served as grand marshal for the annual Homecoming parade, he delivered a message that would remain between him and the team.

Here was Edelman, standing in front of a 1-3 mid-major football team, sharing a message he jotted down from a Patriots meeting two months ago.

He caught the game-winning touchdown pass in last year’s Super Bowl, has a $17 million contract with the New England Patriots and, through Saturday, has the third-most receptions in the NFL.

But Edelman, who was the quarterback for the Flashes between 2006 and 2008, remains loyal to the team that gave him his first opportunity.

“I heard something that my coach told me. I was writing notes, and I was like, ‘This is something I want to share with the guys at Kent,’” Edelman said. “I’ve played in the league now for seven years, and anything I can do to try to help one of those guys and they take something from it, it’ll be good.”

Although this weekend was Edelman’s first Homecoming since he first left the university, he’s always kept close ties with his alma mater.

A week prior to his Super Bowl victory, Edelman tweeted a “Throwback Thursday” with a video link to his highlight reel as a quarterback at Kent State and typed, “#goflashes.”

He also retweeted a picture of four students from the Hillel at Kent State holding up a banner that read, “Good luck Julian,” and replied, “Appreciate it guys.”

Edelman often wears Kent State apparel, too. He first announced he’d be going to Homecoming in August with a video taken in the Patriots’ locker room.

In the video, he said: “Don’t miss it. Go Flashes,” and pointed to the Kent State logo on his gold shirt.

Just three weeks ago, following the Patriots’ 40-32 win over Buffalo, Edelman appeared in front of his locker sporting a navy blue t-shirt with “Kent State football” written across the front.

Edelman doesn’t wear his heart on his sleeve, he wears it on his shirt.

“All these guys who went down to Alabama and freaking Ohio State and all these other players, they all rep their school, so I rep mine,” Edelman said in an interview Tuesday. “I’m proud to be a Flash and I wear my Kent State shirt every day to work.”

Edelman has visited campus several times previously, including co-hosting an athletics department auction in 2014, but Saturday was special because he was also inducted into the Kent State Athletics Hall of Fame.

He autographed footballs and Edelman jerseys at a meet-and-greet, then cut a gold ribbon before the parade.

During the homecoming game’s halftime, he spoke to media at a press conference. Edelman even managed to get off campus for a bit to grab a Swenson’s hamburger and enjoy a Saturday night downtown.

But Edelman’s strongest links to the university are simple text messages.

He keeps close with the people he played with at Kent State. He’s particularly fond of former Flashes coach Doug Martin and Casey Wolf, who was the assistant athletic director for football operations from 2003-2012.

Martin, now the coach at New Mexico State, said he and Edelman text about once a week.

“Julian was a special player when he was there, and he and I had a great relationship when he was playing there,” Martin said. “I’m very appreciative that it’s continued. He’s just a really special person to me and my family.”

Wolf, who Edelman called his lifeline to Kent State and one of his best friends he made here, was the first person to ask Edelman about homecoming. When Wolf saw the homecoming schedule lined up perfectly with the Patriots’ bye week this year, he shot him a text.

“I like to keep him up to date with what’s going on at Kent because he’s proud to be from here,” Wolf said. “I didn’t have to beg him (to be the grand marshal.)”

When asked who his best friends at Kent State were, Edelman listed 11 names and said he could’ve counted more.

“He’s never lost sight of where he came from,” Martin said. “He’s very appreciative of Kent State for giving him an opportunity. A lot of times, guys lose sight of that. I think that says a lot about who he is.”

Jimmy Miller is a senior editor for the Kent Stater. Contact him at [email protected]