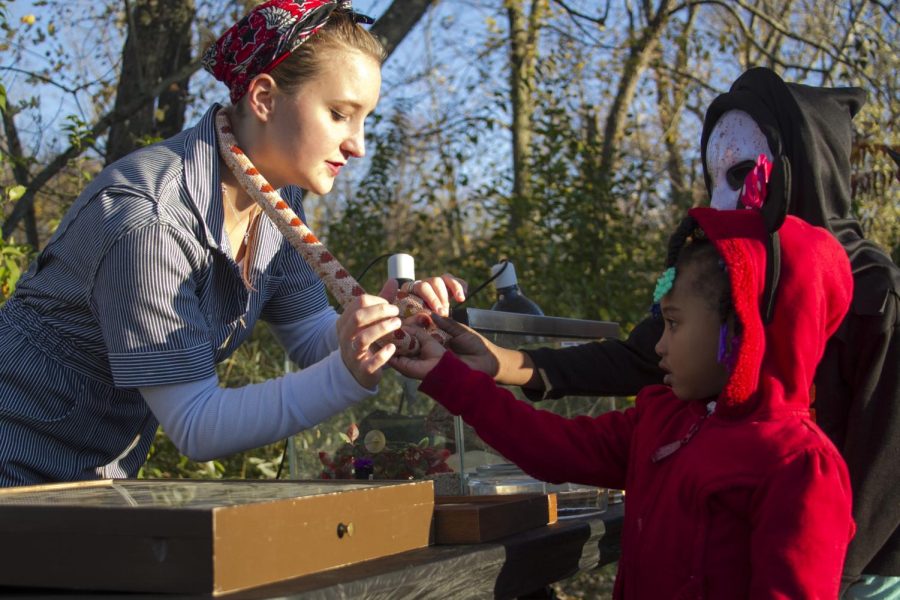 Organismal Biology major Valerie Kramer shows off her pet snake Archimedes to children at the BooU event at Kent Stark campus on Oct. 29, 2015.

Kent State’s Stark campus celebrated Halloween with students and community by hosting a fall festival, Boo U, on Thursday.

The guests followed along a trail of treat-filled tables run by student and community member volunteers stationed throughout the campus.

Stark Park’s marketing specialist Jared Shive said this is the organization’s second year volunteering at the event. The park brought replicas of some wildlife living in the parks, and some information for the guests about services the park offers.

“We’re here to bring out the parks mission and tie it into the events,” Shive said. “And of course to see all the great costumes.”

“I wanted to volunteer for the experience,” Pope said, a public communications major. “Everyone made it seem so fun. I’m excited.”

The Kent Stark biology club took over a portion of the campus with a few different tables. At one table, sophomore research assistant at Kent Stark, Valerie Kramer, brought her pet snake for trick-or-treaters to hold. The biology club also had a table for trick-or-treaters to make their own slime, and a pollination station, where the guests pretend pollinated flowers to get candy.

The event was packed with community members and their costumed kids. Erin Hollenbaugh, a communications professor at Kent State Stark, said this was her second year attending Boo U.

Stark is hosting a group of exchange students from Shenzen, China who were experiencing their first Halloween.

The first Boo U event was held on campus in 2008 and has been an increasing success ever since. Cynthia Williams, public relations coordinator at Kent Stark, said the campus advertises the event specifically to the local elementary schools.

Williams said the reaction from the community is positive.

“The parents send us appreciative comments and let us know that their children loved the event,” Williams said. “We also hear from the students who volunteer to help at the event. They love coming up with themes, dressing up in costumes and passing out candy to all of the kids.”

Katie Rush is a regionals/commuters reporter for The Kent Stater. Contact her at [email protected]