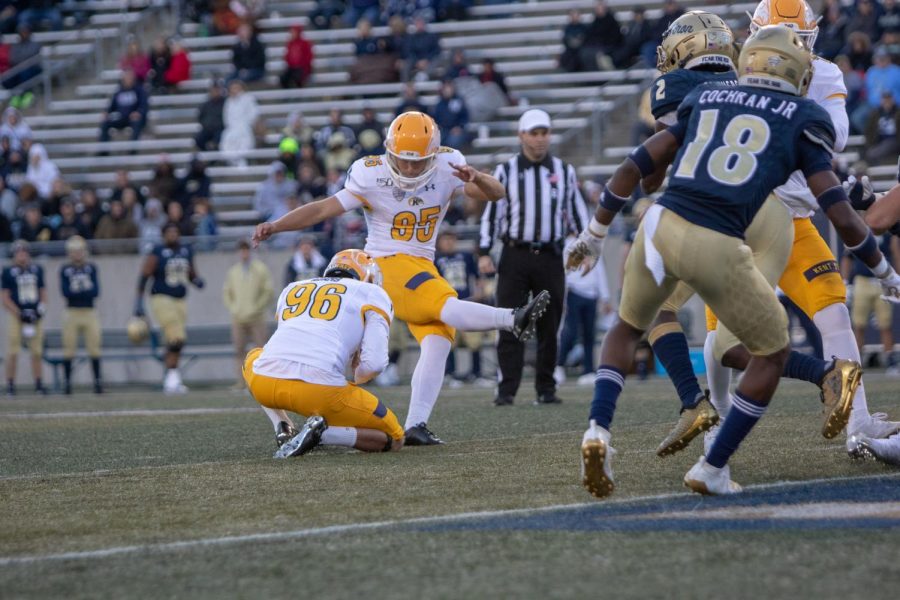 Matthew Trickett starts the scoring in the fourth quarter with a 45-yard field goal to extend Kent State’s lead to 23-3.

This is a blow to the Kent State football team, which will lose one of the best special teams players in both the Mid-American Conference and all of college football.

“After talking to my friends, family and coaches I have decided that it is in my best interest to graduate transfer from Kent State,” Trickett said in a tweet on Monday afternoon.

In the Flashes’ four games during the 2020 season, Trickett played in only three, going a perfect 22 of 22 on extra points and 4 of 6 on field goals to score 34 points.

In 2019 the junior from Ontario, Canada was one of the the most prolific kickers in all of Division I football, leading the MAC and tying the national high of 29 field goals made.

His career field goal percentage is 82.5 percent, the third best in the MAC since 1956.

Kent State will return many of its other crucial players, including quarterback Dustin Crum and offensive lineman Adam Gregorie, but will be on the search for a new starting kicker.

In Kent State’s first game against Eastern Michigan University, Trickett was absent for undisclosed reasons, and was replaced by Seth Phillis, who went 3 of 4 on extra points and did not attempt a field goal. Phillis is no longer listed on Kent State’s roster.

Owen MacMillan is sports editor. Contact him at [email protected]