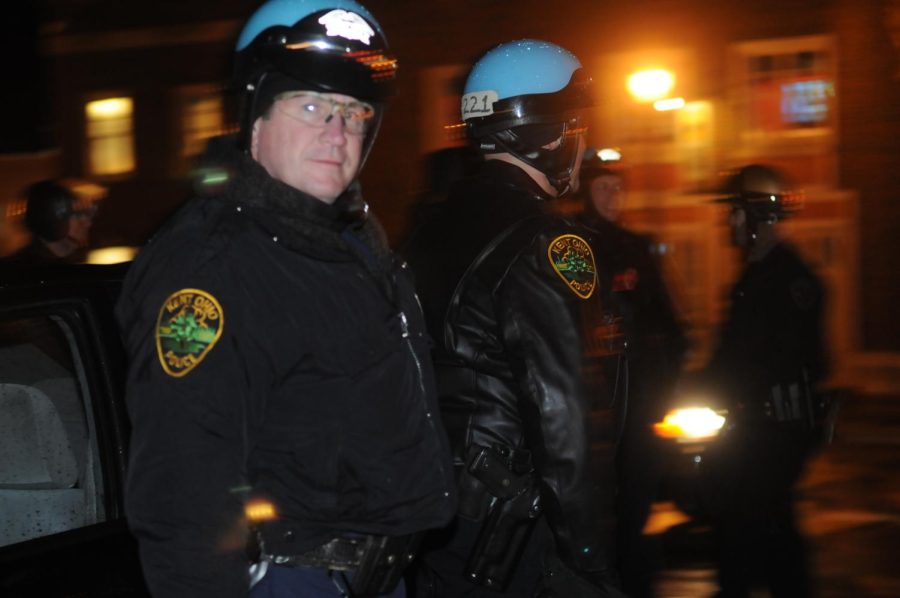 Police officers from Kent State, Kent City, and Brimfield were stationed in and around Downtown Kent for the annual Halloween festivities Saturday, Oct. 26, 2013. Some officers were on duty until as early as 7 a.m. to make sure rowdy partygoers did not get out of hand.

Halloween is a day that many students love to dress up and celebrate, but the police want students to know how to stay safe this holiday.

Lieutenant Joe Hendry of the Kent State Police Department said it is important not to be alone or to leave friends behind. Students can keep themselves safe, but cannot control what others around them are doing. Without proper precautions, students can find themselves in danger or in trouble.

Kent’s award-winning officers and surrounding areas police forces will be downtown for the entire evening to keep the students safe. The special weapons and tactics (S.W.A.T) team will also be out on the streets for the evening to help with patrolling.

“We are considered mid-sized departments in the United States,” Hendry said. “but when you’re dealing with thousands of people that’s not nearly enough officers.”

The S.W.A.T. team is not out as riot control, Hendry said. Instead they are acting as patrol officers to aid the officers of Kent. If things do get out of hand though, the S.W.A.T. team will be dressed for the occasion.

Whether students are on foot or behind the wheel of a vehicle, there are officers watching.

“The State Highway Patrol, they bring in troopers from all over the state to do patrol interdiction and they do a good job,” Hendry said.

Officers intend to keep student safety as their number one priority on Halloween.

“We try to be more proactive that night and heavily focused on safety and security-type things, not so much on arrest,” Hendry said. “There will be a lot of warnings given out that night.”

Hendry said the number of people getting arrested on Halloween is typically much greater than that of a normal night, but there are also many more people out on that evening to account for. It is not uncommon for people from surrounding cities to come celebrate this holiday in Kent.

“A lot of the problems that we deal with are non-students,” Hendry said. “There’s people that think there’s a party here and they just show up trying to get into peoples’ houses and apartments, which can lead to assaults and robberies. ”

According to Cleveland 19 News, in 2013, three men from Cleveland came to Kent Halloween with handguns with intentions of robbing intoxicated students.

With social media being so popular, it is also important to take precautions with that as well. It is unsafe to post to social media address of Halloween parties.

“People will show up places that you don’t want there,” Hendry said.

This year, the Head Fire Marshal Enforcement Officer for the state of Ohio is bringing people in to check businesses and apartment buildings for code violations, such as over occupancy that can create problems or fire hazards. Hendry said this will keep downtown businesses safe during the holiday weekend as well.

Carson Kleinman is the safety and transportation reporter for The Kent Stater. Contact her at [email protected]