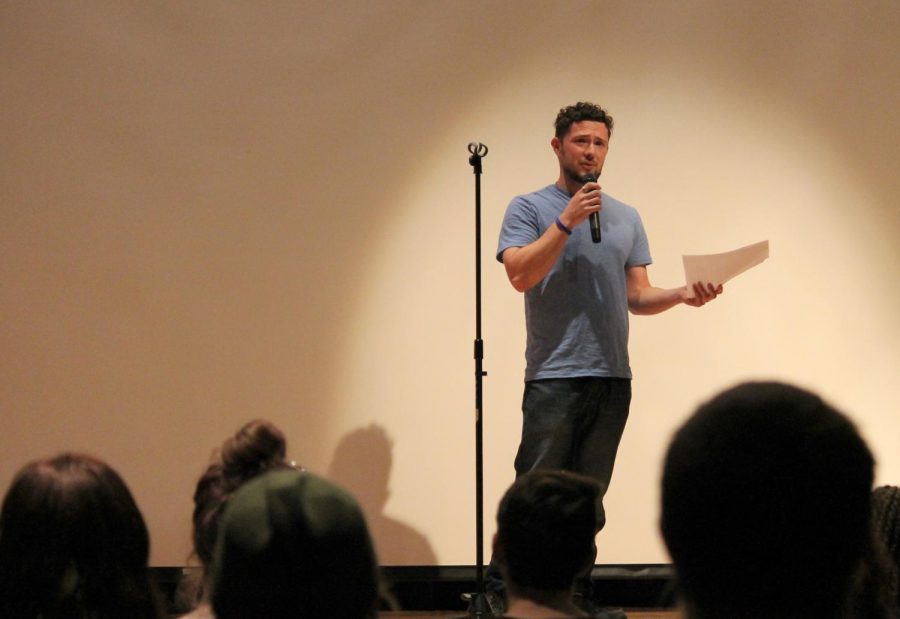 The Poetry Slam featured seven poets who competed for a trophy, a Wick Poetry Center gift basket and a $100 scholarship.

Student poets slammed about relationships, mental health, racism and other issues over two rounds and were critiqued by a panel of judges comprised of students and alumni.

“We’re encouraging participants to perform pieces that share something about themselves, particularly something they wouldn’t share otherwise,” said John Hess, a senior political science major and programmer for KSCP.

Two auditions were held prior to the event to hand-pick the competing poets.

Hannah Gianfagna, a senior english major, was one of eight to perform and share her pieces with the audience.

Although Gianfagna wasn’t the only first-time poet to take the stage, she was the only poet who auditioned by accident.

Gianfagna was looking for the Ballroom Dancing Club when she stumbled across the poetry auditions going on in the Student Center.

She said she had always used writing as a form of expression and decided to audition on a whim.

“I texted my friend to send me a picture of a poem that I had written at home so that I had something to read at the auditions,” Gianfagna said.

Though the event only housed 40 people in the audience, it didn’t stop nervous Gianfagna from expressing herself through two of her poems.

Gianfagna’s first piece, entitled “Can You Hear Me Now?” focused around feeling invisible and was inspired by the mental health issues she has struggled with.

“I have always felt unnoticeable, I actually had someone sit on top of me at a movie theater once because they didn’t see me sitting in the chair,” Gianfagna said.

Following a short intermission, Gianfagna performed her second piece entitled, “Unspeakable.” The piece was filled with grammar puns and dramatic rhythmic changes eluding to a speech impediment that Gianfagna had growing up with.

Gianfagna took fourth place in the competition, by a tenth of a point, and said that the experience has inspired her to take her poems to the stage more often.

Weslee Clyde is a student life reporter for The Kent Stater. Contact her at [email protected]