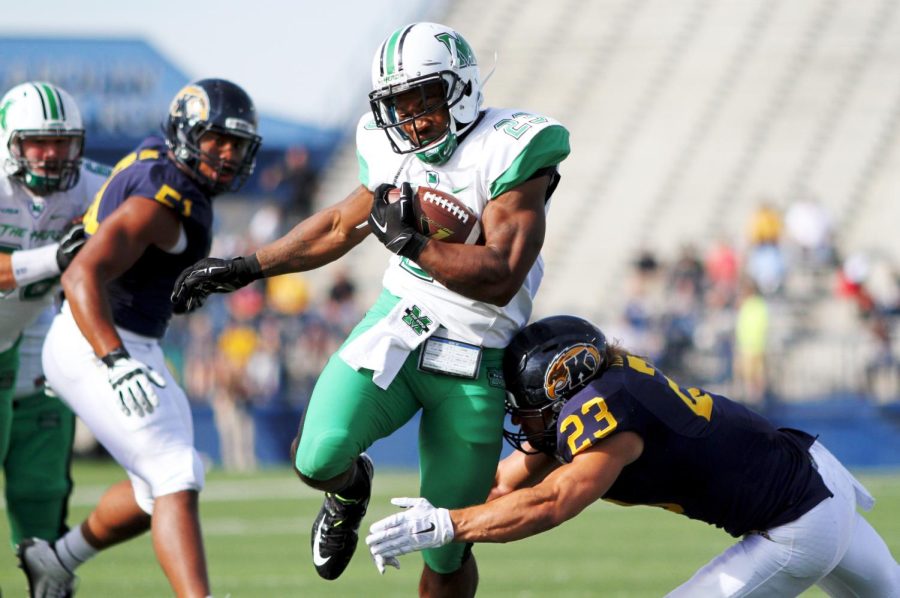 Tony Pittman (#23) of the Marshall Thundering Herd runs for a touchdown in the first quarter of Kent State vs Marshall game on Sept. 26, 2015. Kent State lost in double overtime, 36-29.

With 13:52 remaining in the game, Kent State (1-3) junior safety Nate Holley was ejected from the game with a targeting penalty. Holley recorded 15 tackles, including 11 in the first half.

The Flashes responded with a 33-yard field goal from redshirt freshman Shane Hynes sending the game into overtime.

Kent State struck in overtime to take a 29-22 lead.

Following three consecutive stops on the one-yard line, red shirt freshman Gunnar Holcombe of Marshall, hooked up with junior Davonte Allen for a controversial three-yard touchdown to tie the game at 29.

Marshall would score again in double overtime on a seven-yard touchdown run by redshirt sophomore Tony Pittman to take the lead for good winning the game 36-29.

“(This was a) tough loss guys fought hard,” said head coach Paul Haynes. “Proud of our guys. A play here and a play there came out different, but we’re learning a lot of things.”

Junior Terence Waugh had a huge impact on the night’s game recording 11 tackles and three sacks. Waugh now has 6.5 sacks on the season.

“Honestly I watched a lot of film with my coach,” Waugh said. “I realized they used a different type of technique passing wise and he just explained to me the best ways to counter that. I just did what my coach asked me to do.”

Offensively, the Flashes started the game out hot, jumping out to a 13-7 lead going into halftime.

“They made a couple of plays here and there,” Haynes said. “One a short field in overtimes it’s a little easier for them.”

Pittman led Marshall on the ground with 133 yards and two touchdowns on 24 carries.

Kent State will be at home again next weekend for homecoming weekend. The Flashes will take on their first Mid-American Conference opponent of the season in Miami (OH.) Kick off at Dix Stadium is at 3:30 p.m.

Stephen Means II is a sports reporter for The Kent Stater. Contact him at [email protected]