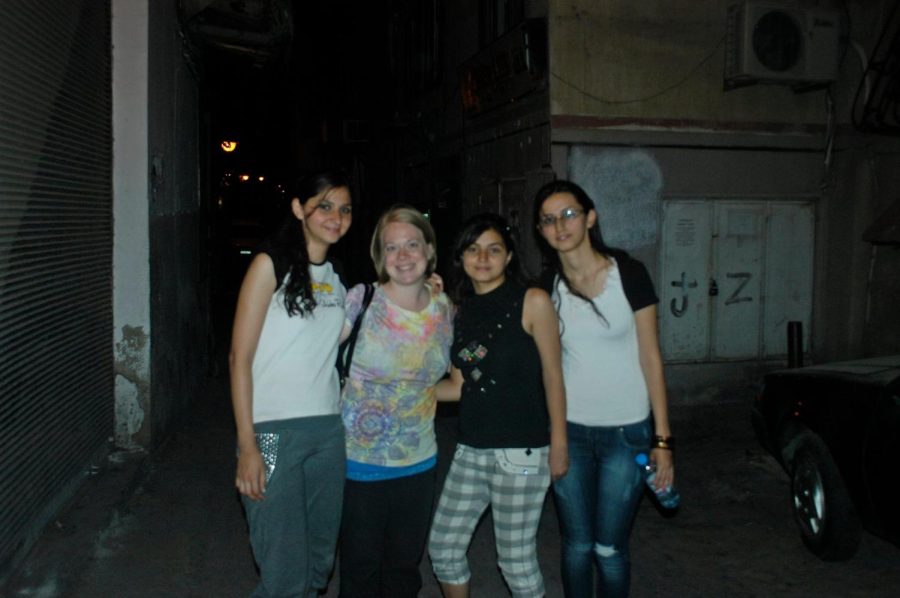 Rana Kurkji, Kelly Krabill, Athraa Kurkji and Rita Kurkji in Damascus, Syria in 2010. Kelly Krabill spends her last day in Damascus at her friends’ home to celebrate her birthday.

Have you seen the movie “Second Act”? If you haven’t, I won’t give too much away.

Jennifer Lopez plays the role of Maya who has worked at Value Shop department store for 15 years and for six of those years she has been an assistant manager. The second scene of the movie opens up to her getting ready at home and wearing business attire. The store’s district manager is coming to tour the store and hire the right candidate for the store manager position. Maya was hoping to get that position. But there’s one drawback her work experience didn’t stand against: her opponent with a college degree.

“Every manager at our company has a college degree,” Maya tells her boyfriend Trey in scene two.

“I’d argue that 15 years of experience is worth 10 degrees,” Trey says.

Is that true? Is 15 years of experience worth 10 degrees? I can’t answer that, but I want to elaborate on the idea of street smarts vs. book smarts.

One definition says that street smarts are the experience and knowledge to deal with potential difficulties or dangers of life in a big city. Another definition says it’s a shrewd awareness of how to survive or succeed in any situation, especially as a result of living or working in a difficult environment.

A college degree doesn’t necessarily teach someone how to deal with difficult situations.

I travelled to Damascus, Syria in 2010 and spent a month and a half teaching English to Iraqi children in the church down the street from where I rented a room. My visa was only approved for 45 days and I had to get it renewed at the American Embassy while there. An Iraqi friend of mine, Rita, went with me as a safety measure and as my translator. I knew enough Arabic to get around town, but I spoke just enough of it to say what I wanted or order food at a restaurant — not enough if I found myself in conversation about my visa situation.

We were directed to talk to someone in their office before we went to the next place that actually renewed the visa. Good thing I had Rita as my translator.

After the first step, we headed to the next room, a site I will never forget. Rita had to wait outside while I got my visa renewed. I found myself in the middle of approximately 20 Arabic men pushing me around like a pinball machine so they could be first in line. And there was no line. It was 20 men shouting in Arabic and holding their passport up to get the employees’ attention.

After several minutes of feeling intimidated and completely out of my element, I pushed my way up to the front of the line because I would have never been attended to if I didn’t get persistent.

I was resourceful. I had to handle myself and take charge. As much as I could, at least, because I was still very intimidated.

I repeated something like, “please help me with my visa,” in broken Arabic.

An employee caught my eye amid the loud men. He had compassion for me and gave my visa a stamp of approval.

I pushed my way back out of the crowd of men to return back to where I was staying.

I spent my last day in Damascus at Rita’s home with her family to celebrate my 29th birthday.

Her dad made my favorite Iraqi chicken and rice meal and we ended the evening eating cake and taking group pictures.

The next day, I woke up at 4 a.m. to go to the airport. I travelled from Damascus to London for an overnight layover before my connecting flight to Cleveland. Once I dropped off my suitcase in the airport hotel, I took the train to downtown London and spent my Friday night walking around the Broadway section of the city. I also bought a sweatshirt and immediately put it on because I went from 110 degrees in Syria to 65 degrees in London. It was cold. And my new sweatshirt was the right kind of comfortable.

I got on my departure flight the next morning and was greeted by my mom and three friends at the Cleveland airport. My friends showed up as a total surprise.

That summer taught me skills I would never learn in a classroom. The lessons I learned could only come from experience.

In the movie “Second Act”, Maya was raised by her grandmother until she died and was then was placed in foster care. She lived in many foster homes. She had a baby at 17 and was then homeless. As painful as it was for her to give her daughter up for adoption, she wanted a better life for her baby.

Now, 15 years later, Maya has a dependable job and a serious partner. They have made a good life for themselves.

She has done all the right things to work her way up the ladder in her company, but she doesn’t have a college degree. She has street smarts instead.

If street smarts are succeeding in difficult situations, what are book smarts?

One definition says it’s being able to succeed scholastically, and possibly not in the real world. Another definition says obtaining knowledge by reading and studying, instead of practical experience.

The disciplines taught during college only enhance street smarts not taught in a classroom.

Maya didn’t get the promotion. The district manager gave it to the guy with a college degree. But she took that experience and started her own business. She took what she learned from all of her difficult life experiences and honed in on those skills as a business owner.