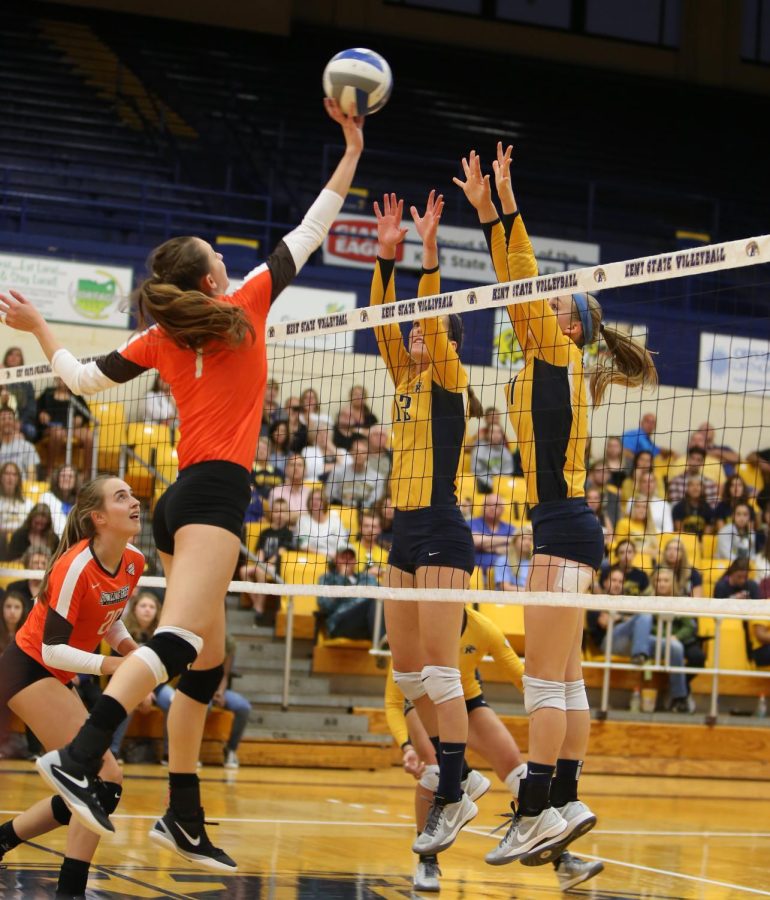 A Bowling Green outside hitter spikes the ball against two Kent State Volleyball players. The golden Flashes defeated Bowling Green 3-1 at the MACC on Saturday, Sept. 26, 2015.

The Kent State women’s volleyball team hosts Ohio University Thursday night at the M.A.C. Center before heading to Mt. Pleasant, Michigan on Saturday to square off with Central Michigan University.

“Ohio’s a good team,” said Hutchinson after Saturday’s game. “We’ve been out to get them since a couple years ago when we beat them when they were ranked. It’s going to be fun.”

The Flashes, who enter the matchup with an even record at 7-7, will look to win its second straight MAC conference game after defeating Bowling Green State University last Saturday.

Friday night at 7 p.m., Kent hosts the Bobcats, who have posted an overall record of 12-3 to go along with a 2-0 record in conference play.

Last season, Kent faced Ohio University twice and lost both games by a final score of 1-3. The Bobcats beat Miami University this past Saturday by a score of 3-1, just one day after Kent lost to Miami 3-2 in overtime.

On Saturday, the Flashes travel to Michigan for a Saturday night game against Central Michigan University at 8 p.m.

The Chippewa’s, like Kent, have both won and lost one game in MAC play to this point.

Kent sophomore Kelsey Bittinger led the team in kills over the past two games against Miami and Bowling Green with 38 and also added 25 digs. Katarina Kojic posted 96 assists over the two-game stretch to go along with 27 digs.

The Golden Flashes have enjoyed stellar play from their outside hitters, as Bittinger and senior Kelly Hutchison combined for 69 kills and a .317 hitting percentage this past weekend.

Jesse Runner is a sports reporter for The Kent Stater. Contact him at [email protected]