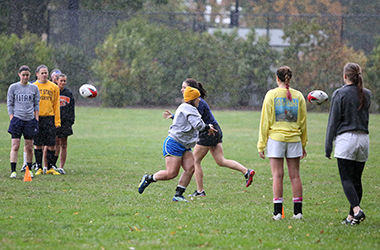 The Kent State Womens Rugby Club Team practice in the rain in front of Taylor hall on September 7, 2014.

Going into the week, head coach Jeff Horton spoke about being more of an attacking team and focusing on fundamentals.

That’s exactly what the women’s rugby team did on Saturday in their 42-19 victory over the Panthers in Pittsburgh.

The Flashes (1-1) were able to communicate effectively and spread the ball around, said sophomore fullback Colleen Carroll.

The forward players — typically the bigger players — took what they learned in practice about attacking the ball carriers into their game today, playing with power and making solid tackles.

The B-side, which is composed of less-experienced and new players, also won their matchup against the Panthers, 26-10.

Kyle Samec is a sports reporter for The Kent Stater. Contact him at [email protected]